Home
Eye Openers
Why ‘Objects In The Mirror Are Closer Than They Appear’?

There is more than one use of a side-view mirror: you can check out how your hair looks (most people do it too, don’t worry) or you can use it to look at some noteworthy feature on the road that your friends pointed at on a long drive.?

Oh right, you can also keep track of the vehicles on that side of your car.

It’s a good bet that people sitting in any vehicle spend a decent amount of time looking at the mirror, which always says, ‘Objects in the mirror are closer than they appear.’ Why do all side-view mirrors say that? And what does that warning really mean?

You must have observed this many times yourself. When you look at the image of an object in the side mirror and then turn backwards and glance at the object itself; you will find that the object is much closer than it appeared in the mirror.

How Does This Happen?

The appearance of the objects in the mirror is just another example of how the world of optics works. Perhaps you know this already, but the ‘mirror’ in the side mirror is not just a plain mirror (like the one you have in your bathroom), but is actually a convex mirror – a mirror that bulges towards you. Since it has a slightly curved surface (unlike a regular mirror, which has a flat surface), it reflects light differently, and consequently displays images in a different manner.

Image Formation in a Convex Mirror

Image formation by a convex mirror

When a light ray (from an object) falls near the center of a convex mirror, it’s path remains almost unaltered. However, if the light ray falls on the curved edges, the farther outward the light will bounce and spread out in all directions before reaching your eyes. Images form (or appear to form) where light rays from different directions intersect each other (at a focal point), but for diverging light rays, this would only be possible if they were to continue ‘through’ the mirror.

This is why the vehicles that you see in the side mirror seem to be ‘further inside’ the mirror (depending on the actual distance of the vehicle on your side). This is the reason why objects in the mirror look smaller and more compressed, and appear farther away than they actually are.

To cut a long story short, the image of the car that reaches your eyes (when you look at the mirror) is not exactly the same car that reflected the light in the first place.

Why can’t we use a plane mirror as a side mirror?

We can, but it wouldn’t be a good idea; a plane mirror shows images of the objects that are right in front of it. In other words, it would definitely show the objects in the mirror at the same distance as they actually are, but it wouldn’t reflect a large area next to the car, leaving a huge (and dangerous) blind spot. A convex mirror, on the other hand, covers a much wider area and has a much smaller blind spot, but comes with the drawback of giving a ‘false distance’. 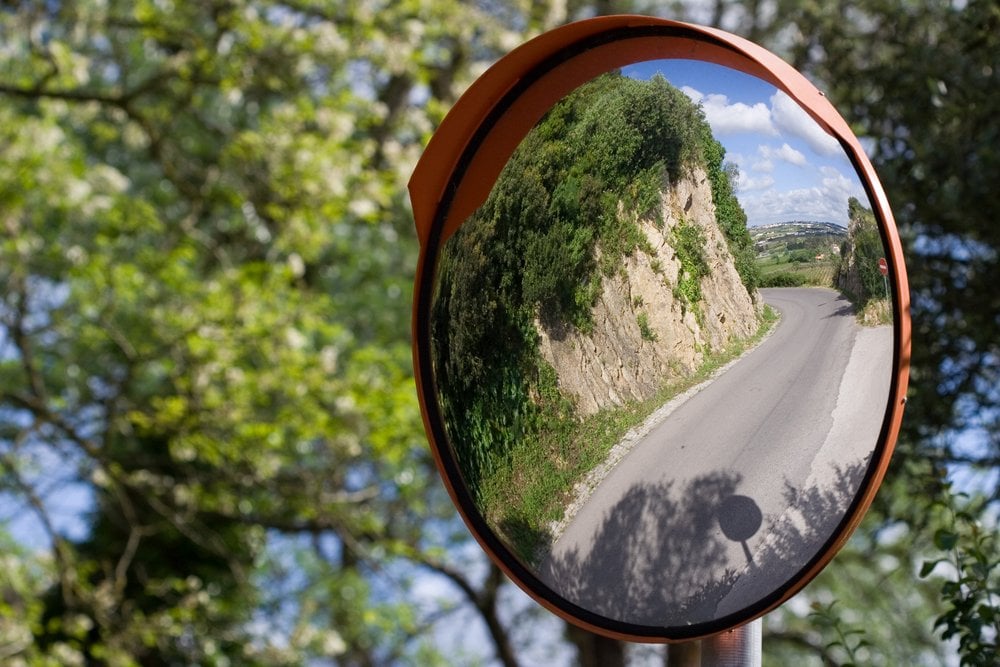 Why do you think they put convex mirrors at turns and intersections? (Credit: Pedro Nogueira/Shutterstock)

It’s a safety trade-off, but from the overwhelming use of convex mirrors in our automobiles, it seems like the car industry made the right choice. Just be careful out there on the road!

The short URL of the present article is: http://sciabc.us/xFGzn
Help us make this article better
Prev Article Next Article