Baking soda is a base that reacts with other things that have acid content, such as yogurt, vinegar, and buttermilk, and releases carbon dioxide in the form of bubbles. Baking powder is a mixture of a carbonate (or bicarbonate) and a weak acid. So, in addition to sodium bicarbonate, the baking powder also contains a drying agent (like starch) and an acidifying agent (like cream of tartar or potassium bitartrate).

Baking soda and baking powder – two utterly common ingredients of countless delicious dishes and also probably one of the most confusing ones. People who are just beginning to cook know exactly what I’m talking about. So, to clear up this mess, let’s try to understand what distinguishes baking soda from baking powder.

Baking soda’s chemical formula is NaHCO3. The chemical structure is represented as: Also referred to as cooking soda, bicabonate of soda or even bread sods, it’s a white solid (but usually appears powdery) and has a salty taste similar to that of washing soda (sodium carbonate). It’s widely used all over the world for baking cakes, cookies, bread and other similar foods.

Baking powder releases carbon dioxide through an acid-base reaction and is widely used for lightening the texture of baked products and increasing their volume. Baking soda is essentially a base that reacts with other things that have acid content, such as yogurt, vinegar, and buttermilk, and releases carbon dioxide in the form of bubbles. Although both of these are leavening agents, these release the trapped carbon dioxide in the batter or dough, which subsequently makes it rise, but baking soda reacts with an acid as soon as it comes in contact with it. Does this characteristic always help when baking things? Precisely! There are certain recipes that need an extended reaction, as opposed to a quick one that occurs while using baking soda. This is where baking powder steps in to save the day.

The acid present in baking powder (apart from baking soda itself, which is a base) may either be slow-acting or fast-acting. If it’s a slow-acting acid, then it will not react in a wet mixture until it’s heated in an oven. However, if it’s a fast-acting acid, it will react even at room temperature. Quite aptly, therefore, baking powder consisting of both slow- and fast-acting acid is said to be ‘double-acting’. Because of this ‘double-acting’ nature, it releases carbon dioxide at different stages of the baking process. With double-acting baking powder, some of the trapped carbon dioxide gas is released when the powder is added to the dough, but most of the gas releases as the temperature of the oven (where the wet dough is kept) increases.

Different recipes use different agents, depending on other ingredients of the recipe and the taste and texture you want to achieve. As a stronger base, baking soda produces a bitter taste in food if its effect is not compensated by an acidic ingredient (like buttermilk). Many cookie recipes use baking soda as an ingredient. 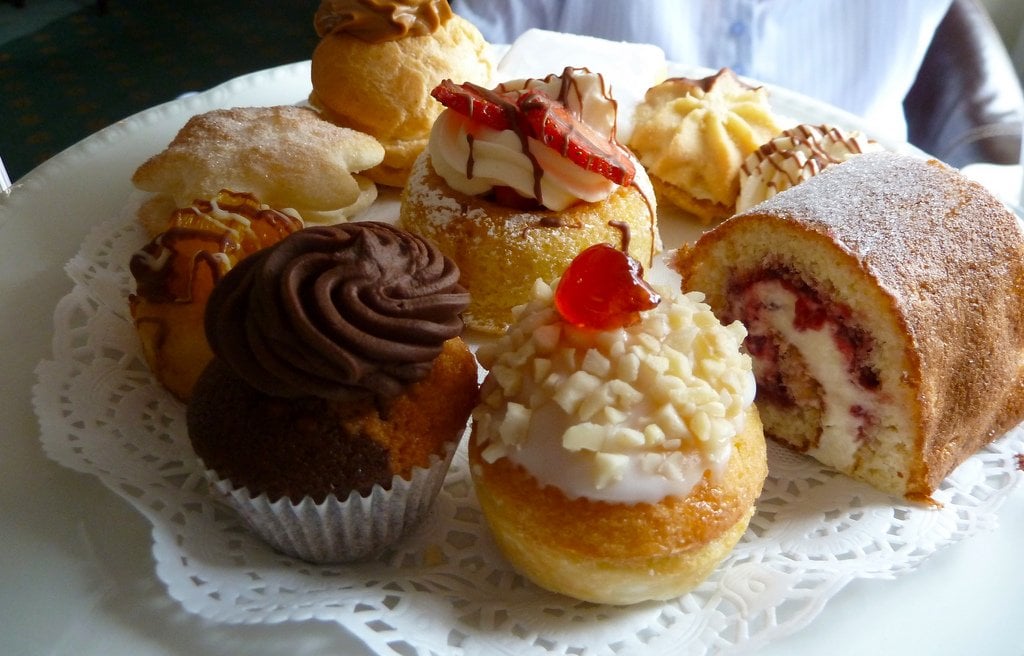 Biscuits and cakes are some of the most common examples of food items that use baking powder (Image Source: JohnGreenaway / Flickr)

Baking powder, on the other hand, is a mixture of both an acid and base, and therefore has a neutral effect on dishes. For this reason, it’s used in a number of recipes that consist of other ingredients as well (e.g., milk).

Both baking soda and baking powder are chemically different and therefore have different effects on the texture and taste of the dish. Therefore, the choice of the ‘right’ ingredient among the two depends on how you want your dish to taste!