Reverse osmosis is an active industrial, energy-driven process that involves applying pressure to a high solute concentration and forcing the solvent through a selectively permeable membrane; the solute remains in an increasingly high concentration, while the solvent is purified. 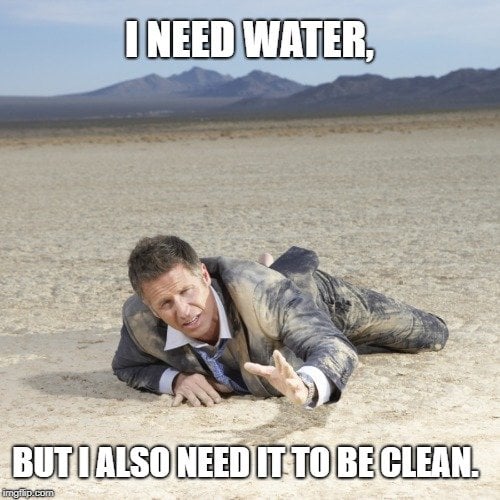 For those who are staring at the glass in front of them with a sudden tingle of fear, don’t worry. Issues like water purity and water scarcity both fall under the purview of reverse osmosis, one of the most important industrial processes for the ongoing survival of humanity.

Simply put, reverse osmosis is an active industrial, energy-driven process that involves applying pressure to a high solute concentration and forcing the solvent through a selectively permeable membrane; the solute remains in an increasingly high concentration, while the solvent is purified.

Before we get into why reverse osmosis might very well save our species, we should take a closer look at humanity’s relationship with water.

With more than 7 billion people on the planet, think about the incredible amounts of water that are used every day… it’s recommended that humans consume 2 liters of water per day as a minimal health necessity, which means that approximately 14 billion liters are drank every day, on average. That’s just drinking! Then, of course, you need to add in brushing our teeth, taking showers, washing the dishes, doing the laundry, running the dishwasher, providing for pets and watering lawns, not to mentioned the incredible amounts of water required for industrial processes, and the amount of water that is accidentally wasted each day!

In some parts of the world, such as the United States, people aren’t overly careful with their water use, and may use as much as 150 gallons of water every day! The average water use varies widely across the world, but the bottom line remains…. we use a HUGE amount of water as a species.

It may not seem like it, but water is a finite resource on Earth. Looking at the vastness of the ocean, this may not seem true, but remember that oceans are filled with salt water. While nearly 75% of the Earth’s surface is covered with water, only 5% of that is fresh water. Salt water fills the oceans, which cannot be drunk by humans, nor is it good for growing plants or other essential uses of fresh water. Thus, the careless use of fresh water, and the failure to properly replenish freshwater reserves, means that our water supply is a growing problem. 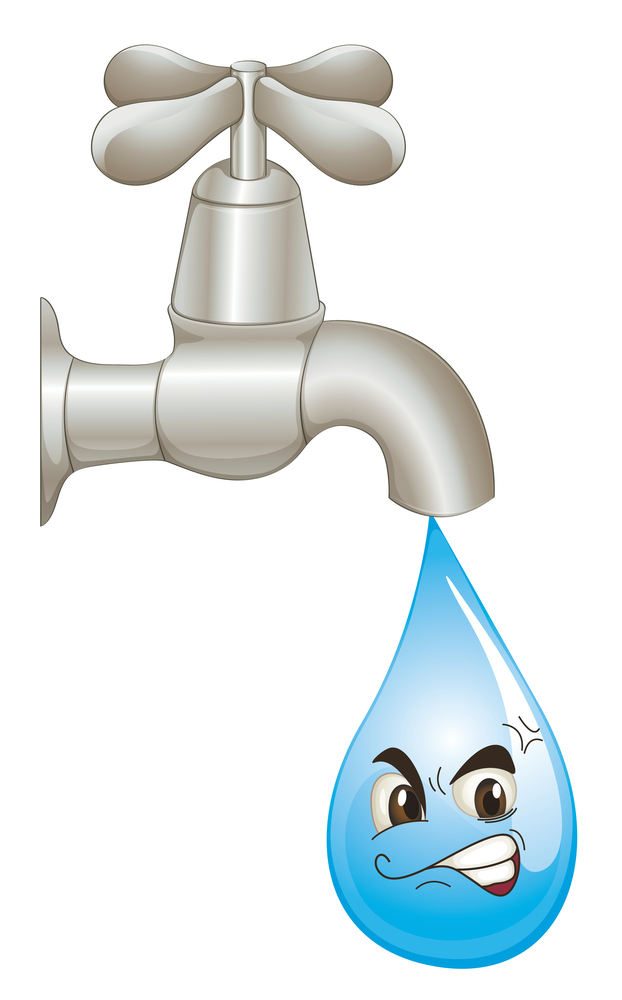 Now, you can rest assured that we’ll never run out of water, but it will become increasingly expensive. Desalination efforts (removing the salt from salt water) require extensive infrastructure and are very expensive, but also essential. Without advances in water purification systems, desalination processes, and widespread reuse of water, humanity would be in the midst of an even greater crisis than it already faces. There are more than 13,000 desalination plants around the world, and some areas of the world are already using up to 20% desalinated seawater for their freshwater needs.

One of the key processes in desalination efforts, as well as in waste treatment and water recycling efforts, is reverse osmosis!

How Does Reverse Osmosis Work?

You are probably familiar with osmosis from your high-school science classes, which is the movement of any solvent from a region of high solute concentration to low solute concentration, thus equalizing the solute concentrations on either side of a selectively permeable membrane. This process is critical to our existence, as it is what the cells of our body use to move water throughout every organ and tissue, facilitating metabolic functions and life itself! This is a passive process that doesn’t require the input of energy, since the molecules in water want to find equilibrium to even out the osmotic pressure. 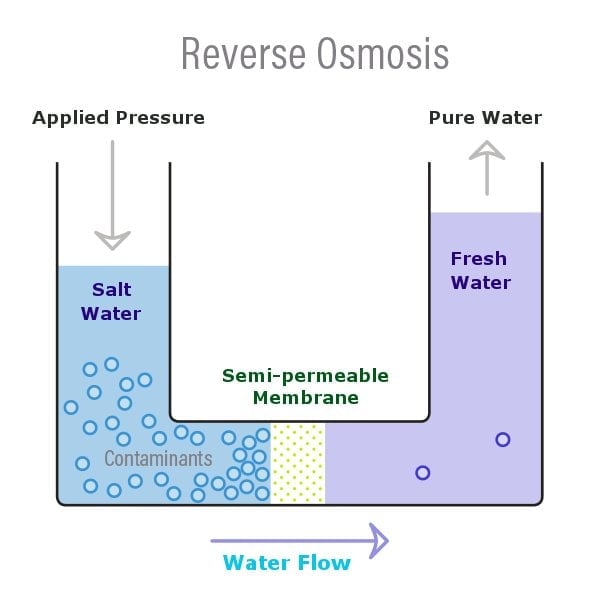 This process may seem quite simple, but it requires a tremendous amount of energy to achieve, as well as specialized technology and infrastructure. Fortunately, with so many different applications (e.g., wastewater management, recycling, energy production), nations around the world are investing in this technology on a massive scale.

The problem with reverse osmosis for many years was the inefficiency of the process, and the small amount of freshwater that was produced. However, certain key advancements have been made, including the development of reverse osmosis cells, tightly wrapped coils of cellular acetate, along with layers consisting of a polyester base, a polysulfone layer and an incredibly thin polyamide layer. Water that contains solutes (e.g., salt, waste, bacteria etc.) is forced through one side of these cells and the solutes are separated from the solvent (water) as it passes through these semi-permeable layers of the coil, coming out as freshwater on the other side. 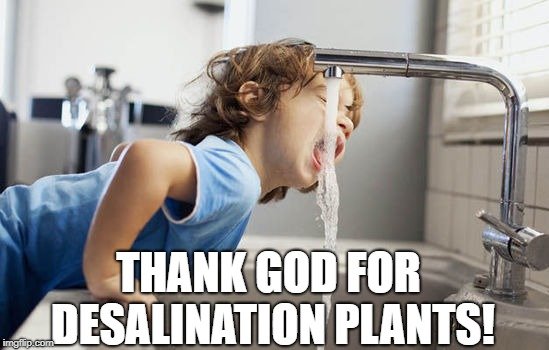 Although the intricacies of the engineering behind these cells is beyond the scope of this article, suffice to say that without this technology, and its ability to take in water contaminated with anything from human fecal matter and toxins to salt and excess heavy metals, we would be in far worse shape than we are now as a species. To understand just how significant this technology is, let’s take a quick look at some of the applications where reverse osmosis has found a home.

While this article has mainly focused on the ability of reverse osmosis to save us from running out of freshwater in the next 50 years, there are plenty of other uses for reverse osmosis that make it critical to our daily life.

Yes, reverse osmosis is perhaps most famous for its ability to remove salt from saltwater, leaving fresh, potable water behind. However, reverse osmosis and its desalinated water only provides about 1% of the drinking water on Earth. Fortunately, billions of dollars are being poured into this technology each year, and with 50% of the world’s population living near an oceanic coast, this will become an increasingly important source of freshwater as our population expands. There are other desalination technologies, such as thermal evaporation, but a great deal of R&D money is being poured into even small membranes, produced at a cheaper cost, to make desalinated drinking water a cost-effective and sustainable solution. 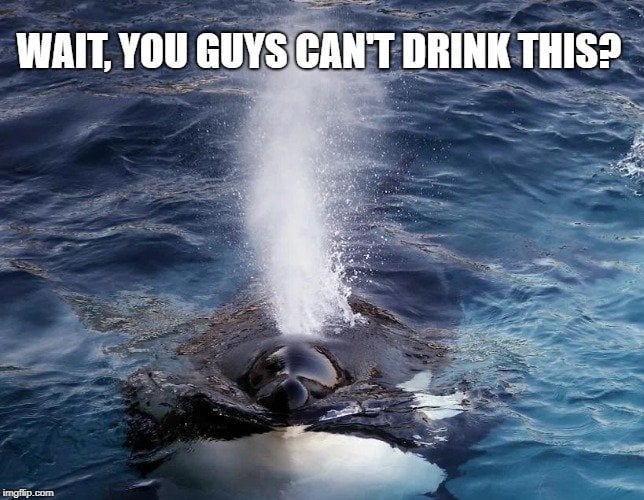 Aside from removing salt from brackish water and seawater, reverse osmosis is also used to remove every other type of contaminant from water. There are many (tiny) impurities that find their way into our water supply, such as fluoride and other heavy metals. On a more relatable level, imagine all of the toxins and waste products in urine and the water we flush down the toilet? All of that water can be treated and processed through reverse osmosis to eliminate all particulate matter, leaving only fresh, drinkable water coming out of your tap—or refilling your toilet bowl!

With the Green Revolution taking place across the globe, recycling has come into the spotlight in recent years, but many people are unaware that recycling also creates a good amount of contaminated wastewater as a byproduct. Reverse osmosis installations in recycling plants are able to separate out those toxins and recycle fresh water back into the system to make the industrial process of recycling more sustainable!

This is one of the fastest-growing areas where reverse osmosis is being applied. In the production of energy, steam is often used to spin turbines, but when this steam is impure, it can reduce the efficiency of the energy generation. When this steam is processed through a reverse osmosis system to remove impurities, it can significantly reduce resource consumption in the production of energy, and make the entire process more sustainable. 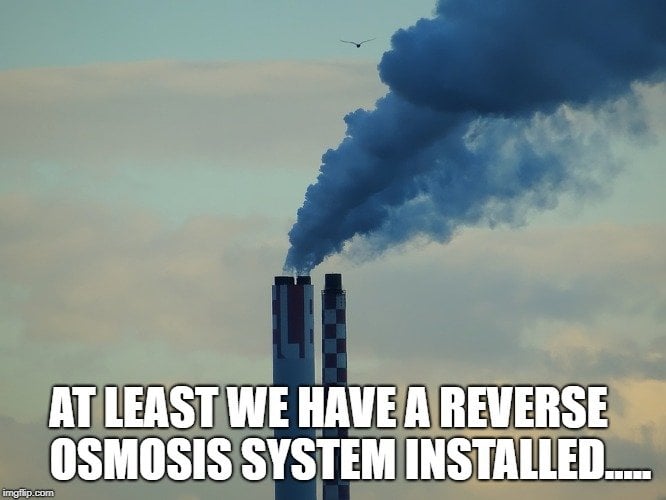 Some of the more unexpected uses of reverse osmosis include its applications in the wine-making industry, as well as in the production of maple syrup. Ethanol, which is what fuels millions of cars around the world, can also be purified through reverse osmosis. Remember, water isn’t the only solvent that can benefit from this technology!

There are many things we take for granted in the world, but the availability of fresh water should not be one of them! The responsible use of water will become even more important in the years and decades to come, and reverse osmosis will play a critical role in our global effort to survive and thrive!