As most of us know, water is a pretty darn essential part of existence on this planet. In fact, it is believed that liquid water was a critical aspect that led to the spark of life on Earth. Now, however, humanity has turned its eyes to the stars, or at least to the other planets in our solar system. Colonizing Mars used to be the stuff of science fiction, but it may become a reality by the end of this century.

Besides knowing that Mars is red, dusty, and Matt Damon’s home away from home, we also know that it’s a rather barren place. That being said, researchers and astronomers also know that Mars wasn’t always such a wasteland. In fact, there used to be rivers, lakes and seas on the fourth planet from the sun. Therefore, as we debate whether human beings could ever live there, the question is…What happened to all the water? 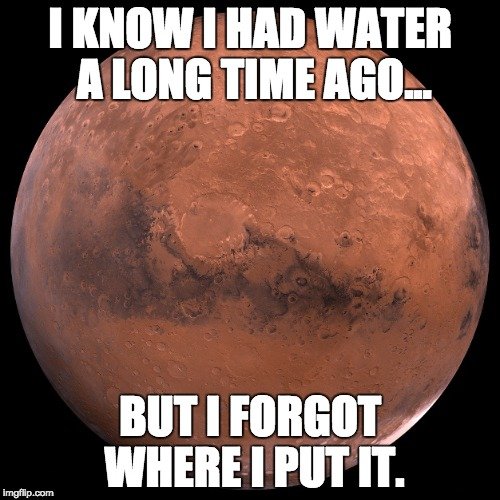 Short Answer: Due to the lack of a magnetic field surrounding Mars, the harsh solar wind and radiation gradually stripped away Mars’ atmosphere, along with (almost) all of its liquid water.

Why Is Space Cold If There Are So Many Stars?

For those who don’t know, much of our solar system formed around (roughly) the same time. For example, Earth is approximately 4.543 billion years old, and Mars is basically our little brother, coming it at 4.503 billion years – a different of about 40 million years. Back then, Mars may have actually looked quite a bit like Earth, with a full atmosphere that was able to keep the planet warm, and plenty of water on the surface, which could have possibly had life spark within it, just as it did on Earth.

Unfortunately, the fate of Earth and Mars were very different, at least to this point. After about 300 million years of existence, a very peculiar thing happened to Mars – it lost its magnetic field. Yes, approximately 4.2 billion years ago, the magnetic field of Mars simply stopped working, which marked the beginning of the inevitable end for the young planet’s chances of a calm, easy life.

To understand why this happened, and what this all means, it is important to understand magnetic fields. Earth, for example, has a powerful magnetic field that protects it from brutal cosmic radiation and solar wind, as well as flares and other incredibly dangerous bursts of energy. Our magnetic field exists because of the composition of the Earth’s core.

There is a solid iron core at the heart of our planet, which exists at a blistering 5,700 degrees Celsius (~10,300 degrees Fahrenheit – about the temperature of the Sun’s surface). However, the incredible pressure around it prevent that iron from becoming a liquid. Surrounding that central core is the outer core, which is under slightly less pressure, and therefore exists as a liquid. This outer core is mainly composed of nickel, iron and smaller amounts of other metals.

As these metals experience convection currents, where denser metals sink and lighter metals rise, the liquid iron flows and swirls, creating powerful electric currents, which then form magnetic fields. Due to the rotational force of the Earth, most of these fields are oriented in a predictable and unidirectional manner, and engulfs the entire planet. This magnetic field helps deflect solar radiation away from our planet, for the most part.

Mars had a similar situation in its first half-billion years or so of existence, but then everything changed. The most prominent theory is that a massive asteroid collision with Mars disrupted the core convection process, causing the magnetic field to stall. Most people believe this asteroid was even larger than the one that wiped out the dinosaurs on Earth, while others believe that Mars was a victim of a bombardment of 4 or 5 large asteroids within a short time, which stopped the core convection.

Our probes have detected small magnetic fields on the red planet, but they are primarily around large impact craters, and in terms of a planetary magnetic field, without core convection, it cannot exist.

The Destruction of Mars

After the magnetic field was eliminated from Mars, nothing stood in protection of Mars’ fragile atmosphere and burgeoning “environment”… the vicious ravages of solar wind began methodically stripping away the atmosphere. The less atmosphere that was present, the less able the planet was to support the watery environment on the surface. A rudimentary explanation would be the way that clothes dry faster in the wind, which is why people hang their clothes outside. Mars was essentially hung out to dry, and was losing somewhere between 1/2 pound to 1 pound of gas per second, and during solar storms, that number would have grown exponentially for short periods of time.

Over the course of a few hundred million years, all the liquid that could be stripped off was eliminated, leaving the desiccated, cold and unwelcoming landscape that we find now on Mars. 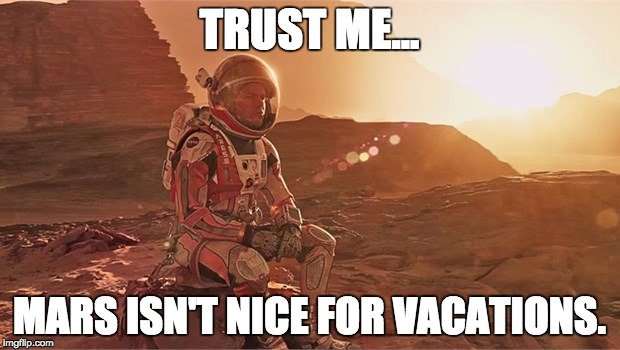 However, there is still some hope, both in proposals by astronomers that it could be possible to kick-start Mars’ magnetic field, or create an artificial field around the planet, thus allowing an atmosphere to begin forming again. In terms of the (lack of) water on Mars, there is also some good news…. apparently, it’s not ALL gone.

Hard to Find, But Not Gone…

Mars doesn’t have any liquid water, but it does have frozen polar ice caps, much like Earth, which is definitive proof that Mars once did have liquid water, before the temperature plunged to nearly -200 degrees Fahrenheit (at the poles). Furthermore, in the last year or so, huge frozen lakes and water deposits have been identified beneath the Martian surface, which is an exciting prospect for future colonization. Extracting the most valuable resource for human survival (water) from the Martian landscape, rather than bringing it with or creating it artificially, is a very important step towards colonization.

Another exciting development is the appearance of “damp” regions of Mars’ surface, and while running water has not been seen or identified, areas that may be experiencing “seepage” from underground liquid sources have been seen. These large, dark streaks are about 5 meters wide and can be hundreds of meters long (as seen below). Precise analysis and measurements have told us that these dark streaks are water, but it is extremely salty. This isn’t ideal water for life, but it certainly doesn’t preclude the possibility that more water exists beneath the surface.

At this point, we don’t know whether the solar wind stripped all of the water away, or whether the water on Mars’ surface remains hidden away beneath the ground, frozen until the magnetic field gets revved up once again. However, with the first humans likely landing on Mars within the next two decades, these exciting questions may soon have more accurate answers!