Bright, curving structures of electrified plasma that appear as arcs above the Sun’s surface are due to its strong irregular magnetic fields and are called coronal loops.

Since the moment man learned to observe the universe with newly invented telescopes, stars were the most favored candidates for study. The Sun, being the closest and most integral source of life for our planet, became a prime candidate for study so we could understand its nature as accurately as possible.

We soon realized that ground-based telescopes could not fully escape the obscuring effects of the Earth’s dusty atmosphere. This gave way to a plan for space-based observations, and sending the telescopes to space was a wise idea, rather than filtering the images to get rid of atmospheric obfuscations. 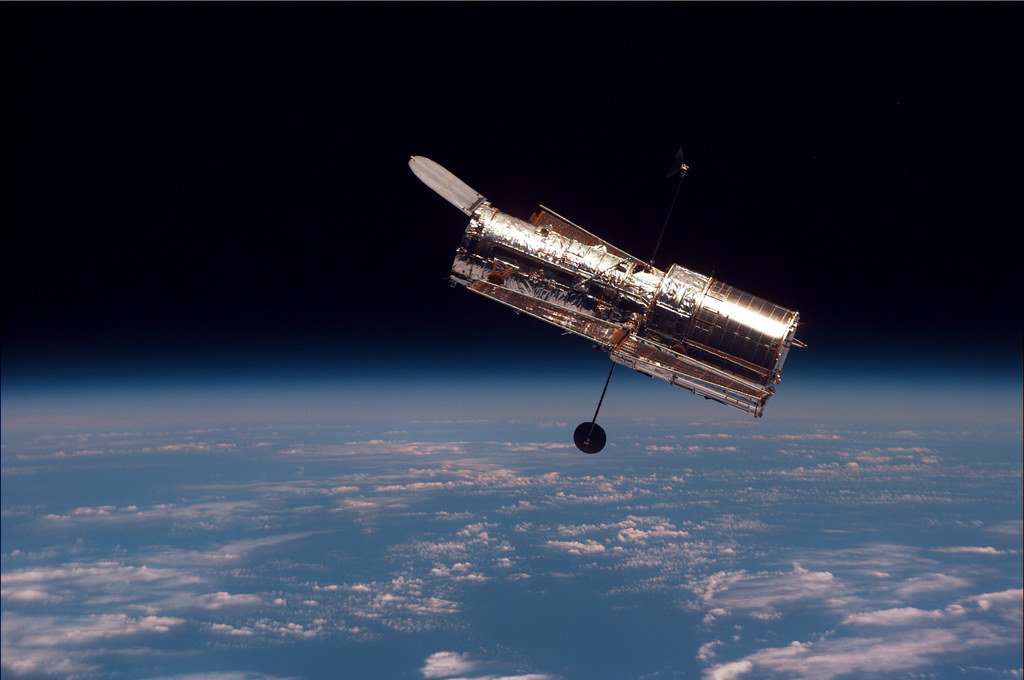 With these new technological advancements, we realized that there was so much more to the sun than initially met the eye. Solar flares, sun spots, solar winds and coronal loops were some of these occurrences, but they never would have been observed if we had continued to conduct research from terra firma.

Without a doubt, some of the most intriguing phenomena observed in the solar atmosphere are coronal loops.

What Are Coronal Loops?

A constant fusion of hydrogen atoms is percolating in the sun’s core. This produces helium atoms and constantly releases a tremendous amount of energy—3.86 x 1026 Joules every second! As this energy heats up the gases, they enter the fourth stage of matter, plasma. This plasma can be continuously ejected outwards, but then strangely enough, will curve back inside. These bright curving loops appear as arcs—the coronal loops—above the Sun’s photosphere. The scorching 5778 Kelvin of the surface temperature makes these coronal loops glow.

What is perhaps most intriguing is the fact that, rather than bursting out in an array of plasma and energy (similar to a gamma-ray burst), these outbursts loop back inside, back towards their source. 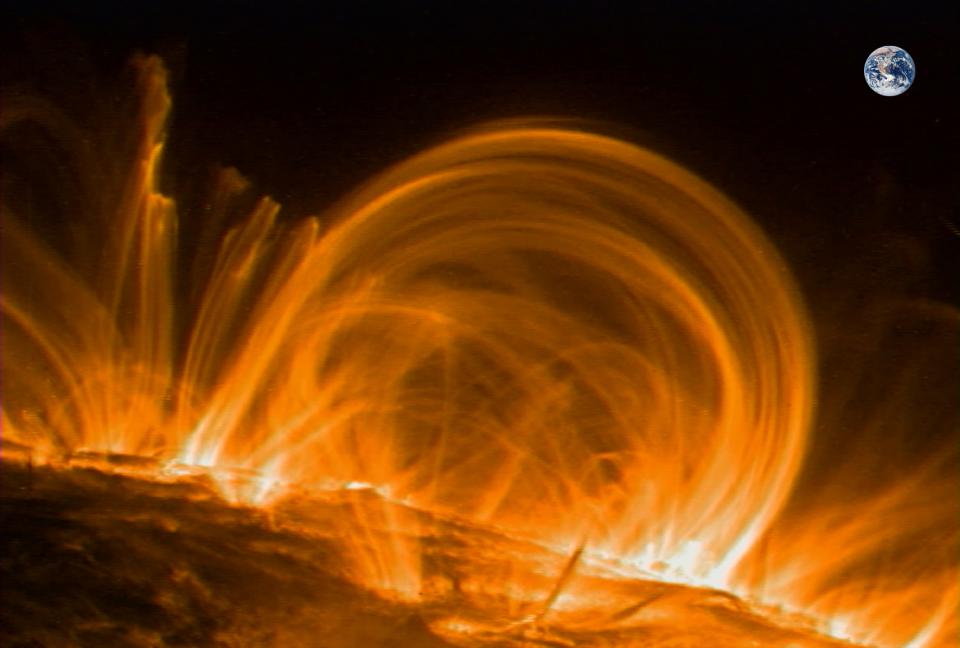 The size of an average-sized coronal loop, in comparison with the size of the earth. (Photo Credits: Nasa)

The sun’s magnetic field, which is certainly powerful enough, has a significant influence on the space weather of our solar system. From solar explosions, causing space weather on Earth–such as auroras (the magnificent light shows in the sky, near Earth’s polar regions), to interplanetary magnetic fields and electromagnetic radiation by which our spacecraft journeying the solar system are greatly affected.

As you might know, magnetic field lines originate at one end of the pole (north) and conclude at the other end (south), but unlike Earth’s uniformly long, end-to-end magnetic field, the sun’s magnetic field is an absolute tangled mess. This is where we see the coronal plasma, looping in and forming the strangest shapes; these are the very spots where the randomly complex magnetic field of the sun has popped out.

Also Read: What Are Solar Winds? How Are They Different From Solar Flares?

To put it simply, the Sun’s magnetic field lines can be regarded as an invisible path followed by the emerging plasma (it’s like traveling by car in a traffic jam, where each individual blindly follows the next in line). These loops repeatedly spurt out of the surface in the space between the north and the south poles. However, unlike the Earth, these poles are not the geographic poles; rather, they’re more like smaller localized magnets. Often times, these poles are found in pairs of sunspots.

Here is a short NASA video explaining how the magnetic field lines of the sun work:

Sunspots are darker and relatively colder areas on the surface of the sun’s photosphere. Sunspots have temperatures of about 3,800 degrees K, which is extremely hot, yet much cooler than the average surface temperature of the sun, 5778K. They look dark only in comparison to the remaining brighter regions of the photosphere around them. 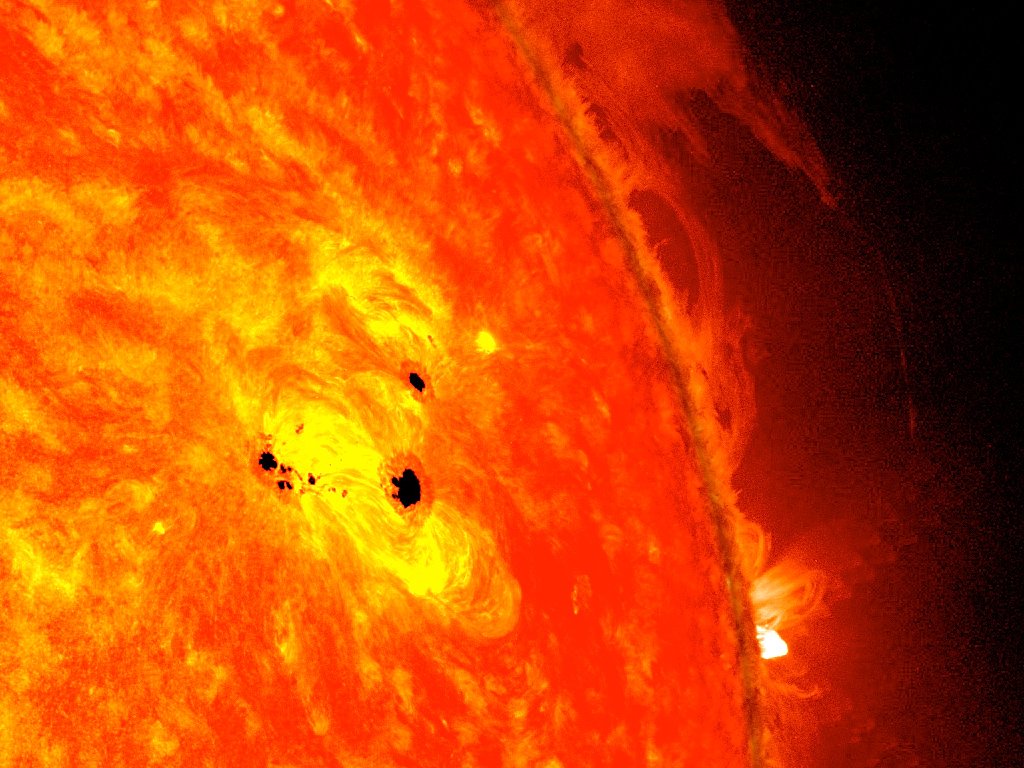 So, how do such anomalies originate on the sun?

Sadly, this is still a mystery. As of now, researchers have pointed to the sun’s magnetic field as being responsible for their origin, because magnetism and heat don’t coexist well together.Basically, if a magnet is heated well beyond a certain point, it loses its magnetic properties. Who knows… this might be the reason for the formation of these colder regions on the surface, after all!

However, sunspots can also be viewed as a cap on a soda bottle: shake it up and you’ll generate a major eruption. Sunspots are more prominent in regions of intense magnetic activity, and when that energy releases, solar flares and coronal mass ejections erupt from those very same sunspots.

How Do Sunspots Cause Coronal Loops?

Now that you understand a bit more about sunspots, it gets easier from here on out. It is generally observed, quite like a magnet, that sunspots occur in pairs, with magnetic lines originating from one and collapsing into the other. 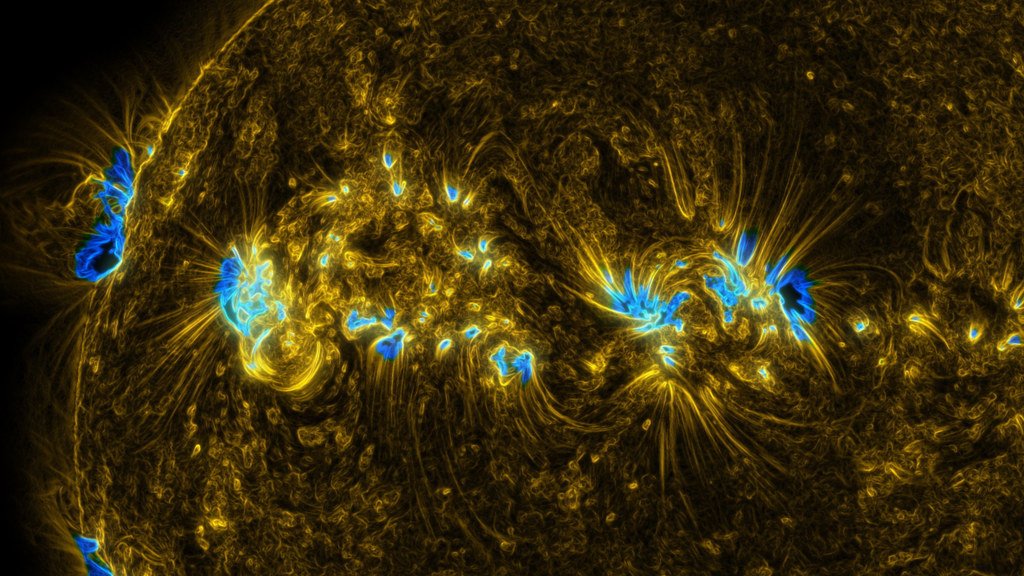 An incandescent filter while observing the sunspots shows the coronal loops originating and collapsing from sunspot pairs. (Photo Credits: Flickr)

Also Read: Why Is The Sun’s Atmosphere Hotter Than Its Surface?

What’s truly remarkable about this is their magnetic polarity. At any given point in time, the polarities of all sunspots present in the same hemisphere are the same. Astonishing, right? When the Sun rotates, if you somehow manage to observe the magnetic polarity of a sunspot in a pair, say at magnetic north pole, then all leading sunspots (the westernmost sunspot of the group located closer to the equator, having a larger area compared to the other spots in the group, is called the leading sunspot or head sunspot) in each pair present in that hemisphere will also have north poles.

At the same time, in the other hemisphere of the Sun, the opposite is true, i.e., all leading sunspots will possess magnetic south polarity. Incidentally, magnetic field lines always travel from magnetic north to magnetic south, thus dragging the coronal plasma ejections in that direction, which is inevitably a loop!