Climate change is making some regions hotter, while others are growing colder; some are becoming drier, and others wetter. Changes in temperature and rainfall are expected to have devastating impacts on three of the most widely produced crops in the world—wheat, coffee and corn. In some countries, climate change will fuel crop loss, while in others, it may increase crop production.

Over the past decade, the world has witnessed one catastrophic event after another, owing largely to global warming and climate change. From wildfires and coral bleaching in Australia and cold snaps in Peru to droughts in Africa and India and incessant rain/flooding in Europe, we humans have seen it all.

Unfortunately, these are just glimpses of the more calamitous events that are headed our way.

Global warming and climate change are often used interchangeably, even though they mean quite different things. Global warming occurs when greenhouse gases, such as carbon dioxide and methane, gather in the atmosphere and absorb solar radiation that bounces off the earth’s surface.

Normally, solar radiation escapes into space, but greenhouse gases trap this radiation and don’t allow them to go back, thereby making our planet hotter. Climate change, on the other hand, is a long-term process wherein weather patterns are disrupted primarily because of human activities, such as burning fossil fuels. Read more about climate change specifics here.

One of the major drivers of global warming and climate change (L), and its associated consequence (R) (Photo Credit : lexaarts & Bernhard Staehli/Shutterstock)

Although these are two separate processes, both have one thing in common; they threaten the survival of mankind. Across the world, there is growing evidence of how catastrophic climate change truly is.

For instance, changes in weather patterns have caused some areas to become hotter, while others grow colder; some are getting drier, and others wetter. Whatever the change may be, one thing is for sure… humans are going to be impacted badly.

Apart from the direct and visible damage to infrastructure, climate change is going to severely impact food production. Although farmers are used to dealing with changing weather patterns, climate change is making it even more challenging due to altered rainfall and temperatures, and by making extreme weather events more unpredictable and severe.

Climate change will severely impact crop production, which will lead to some regions witnessing higher agricultural production, while others will experience considerable declines.

For instance, scientists predict an increase in agricultural productivity in northern Europe resulting from longer frost-free periods, but in the Mediterranean region, they predict dramatic yield reductions due to extreme heat and stress. Changes in temperatures will also lead to the proliferation of invasive species (particularly weeds) and disease, which will further reduce production. Will Some Crops Be Affected More Than Others?

Among the many crops grown across the world, some will be affected more than others. This is because each crop has its own nutrient and water requirements and each responds to adverse changes differently.

Let’s take a look at the three most widely produced crops that are expected to be badly affected by climate change.

Wheat is one of the most significant crops in terms of worldwide consumption and it constitutes around 20% of all calories consumed by humans. Unfortunately, it is also one of the primary crops that will suffer due to hotter temperatures. Wheat is largely produced in China, the USA, India and Russia, and these countries are expected to be hit badly by climate change.

About 60% of the current wheat-growing regions across the world are likely to undergo severe drought by the end of this century. Scientists predict that a 1◦C increase in global temperatures will bring about a global decline of 4.1 to 6.4% in global wheat production.

Similarly, in India, scientists project that climate change will cause a 6-23% reduction in wheat yield by 2050 due to increasing temperatures. Interestingly, Australian scientists suggest that an increase in carbon emissions over the last 50 years has helped increase yield by 2-8%.

Coffee is grown in over 60 countries and each of these regions face different levels of threat and severity from climate change. Coffee plants cannot withstand freezing temperatures, nor can they withstand extreme heat. Hence, when temperature and rainfall patterns are disrupted, so is coffee production, yield, and quality. 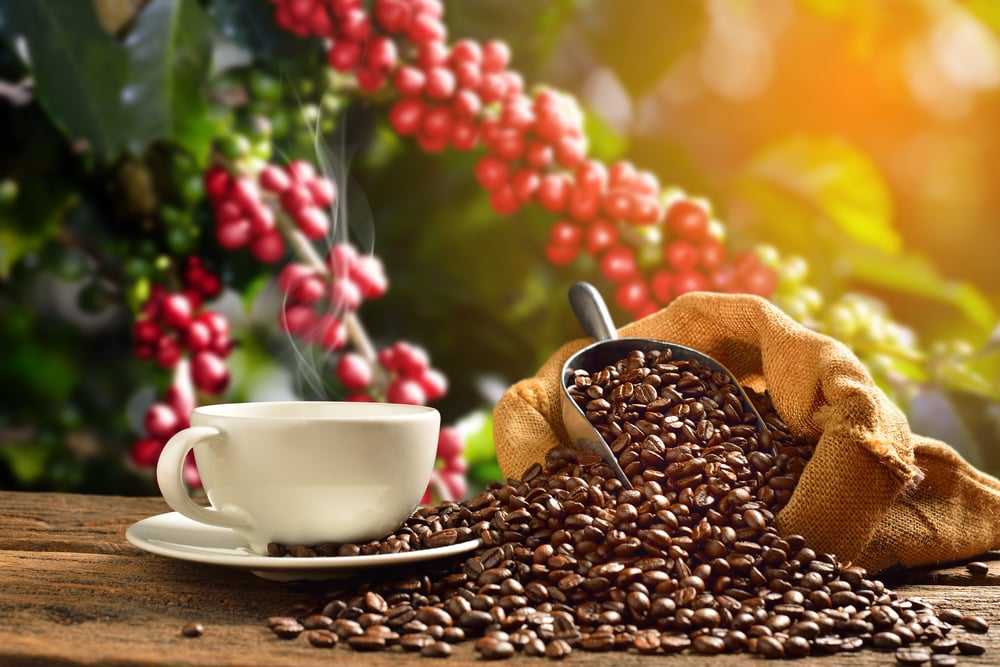 Can you picture a world without coffee in it? I certainly can’t! (Photo Credit : amenic181/Shutterstock)

Changing patterns in climate jeopardize the livelihoods of over 100 million coffee farmers and also reduce the crop’s production capacity. Researchers estimate a reduction of 73 to 88% in regions across the world that are suitable for coffee production due to climate change.

Brazil and Vietnam, two of the world’s largest coffee producers, are expected to witness large-scale reductions in land that is suitable (and available) for coffee production. Other regions, such as Nepal, which produces less coffee in comparison, may also witness reductions of around 72% in suitable growing areas by 2050.

The world’s most widely produced crop, corn, is also expected to face a severe decline due to climate change in the future. Warmer temperatures will not only impact corn production during pollination, but also impact grain-filling periods. Rainfall will reduce drastically, but when rain does fall, it will be more intense, neither of which are helpful, as corn requires frequent rain. One of the most widely grown crops in the world is about to be wiped out by climate change. (Photo Credit : juerginho/Shutterstock)

Over two-thirds of the world’s corn supply are produced by the USA, China, Brazil and Argentina.  Scientists predict that these countries will witness a decline in corn production by 8-18% if temperatures were to increase by 2◦C and a 19-46% decline if temperatures increased by 4◦C. On the other hand, 91% of the land under maize cultivation in India is expected to face wetter conditions over the next 40 years. Moving forward, we must make sustainable choices in our day-to-day lives in order to survive. (Photo Credit : Nicole Glass Photography/Shutterstock)

So, as you can see, climate change will have a huge impact on agricultural production, especially on crops such as wheat, corn and coffee. Not only will it lead to food shortages, but it will also create a humanitarian crisis across the globe. Hence, it is of the utmost importance that we make a conscious shift towards adopting a more sustainable way of life as an entire species.