At the molecular level, there is cell division, as well as starch to sugar conversion, translating green hard bananas to sweet and sumptuous yellow ripe bananas, enticing frugivores and humans alike.

Bananas are not a delicacy exclusive to our primate cousins. We, as a global civilization, have been consuming bananas for centuries. Now, in highly our industrialized society, we conduct large-scale import and export activities involving these delectable fruits. In fact, bananas are the best-selling item at Walmart, beating out the likes of Coke and Pepsi. Annually, an average American consumes over 25 pounds of bananas!

People like ripe bananas, so special ripening chambers exist where imported bananas are immediately kept so that they reach the market in a ripe and delicious form. We will look into both the contemporary and ancient methods of banana ripening and preservation in this article, in addition to uncovering the science behind the changing color of ripening bananas.

When we talk about local produce, a lot of banana stock is still raw when sold to consumers, and in the case of large Cavendish bananas, being raw means being green in color. We only eat bananas when they turn yellow, so this color change is an important indicator of ripeness. The question is, what causes this color change when bananas ripen? 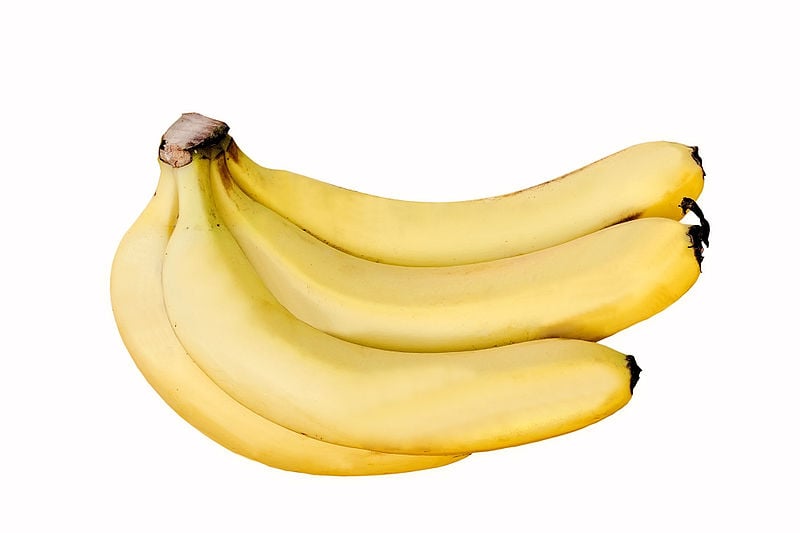 With the growing interest of consumers in organic and sustainable farming, as well as a rediscovered passion for good food, researchers have an opportune time to unearth the science behind fruit color and flavor. Let’s look into the complex biochemistry that explains why fruits like bananas change color as they ripen.

There are two ways to answer why bananas change color upon ripening. First, you can look inside the fruit as it ripens, and second, you can explore the evolutionary science behind why banana plants have evolved to do this at all. This especially takes into account the massive amount of energy and resources that the plant spends to produce bananas around the seeds.

Speaking from a botanical perspective, fruits like bananas are nothing but matured ovaries containing seeds. This seed suitcase, in the case of bananas, is very fleshy. A fleshy banana from its plant’s perspective is a fee for service—a nutritious meal to entice animals in the hope to get the seeds dispersed through them. You can learn more about seed dispersal by frugivores in this article.

How do bananas change color?

Many fruits, including bananas, start as a shade of green. The green peel of the banana is due to the abundance of chlorophyll. This chlorophyll, using the sunlight and nutrients from the soil, produces much of the meat of the fruit. At this point, the green banana is mainly composed of starch. With this high starch content inside the fruit, bananas are firm and hard. As the seed is about to achieve maturity—kicking in the fruit ripening process—hydrocarbon gas called ethylene starts changing the banana’s color.

Ethylene is a crucial ripening hormone that makes bananas change color, as it aids the fruit in its ripening. The chlorophyll in the peel breaks down, and the starch within the fruit is converted into simple sugars. As a result, the peel turns yellow and the fruit softens up, becoming sweet. This change leaves the peel much softer and thinner than it was initially; making it much easier to peel back from the delicious fruit. 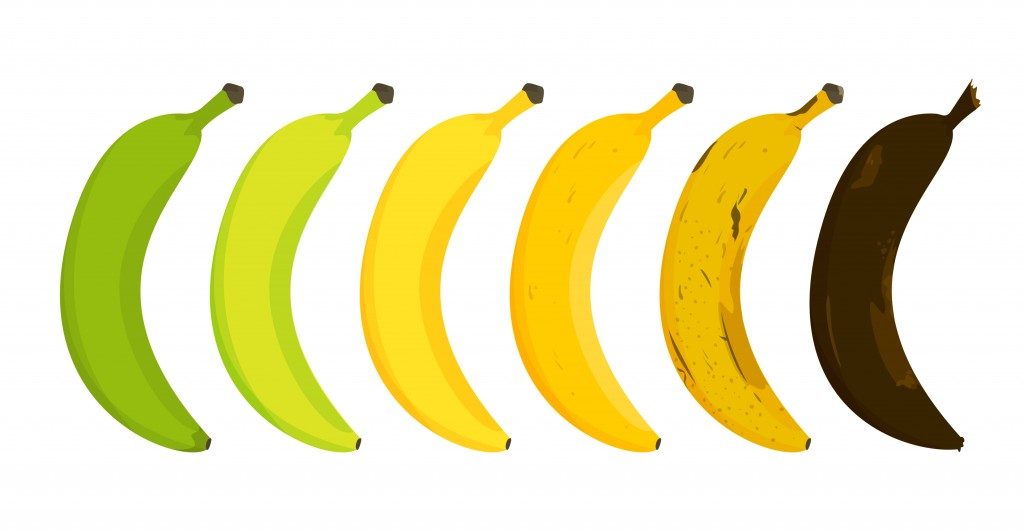 Ethylene gas is a simple molecule C2H4 that is also found in fumes from vehicle exhaust. It is a master manipulator of ripening processes in fruits. In several plants, ethylene triggers both flowering and fruit ripening. It is the prime suspect behind the fruit developing its color, aroma and texture.

The surge of ethylene proportion leads to the transformation of a hard green banana into a tender, tasty and sumptuous fruit. 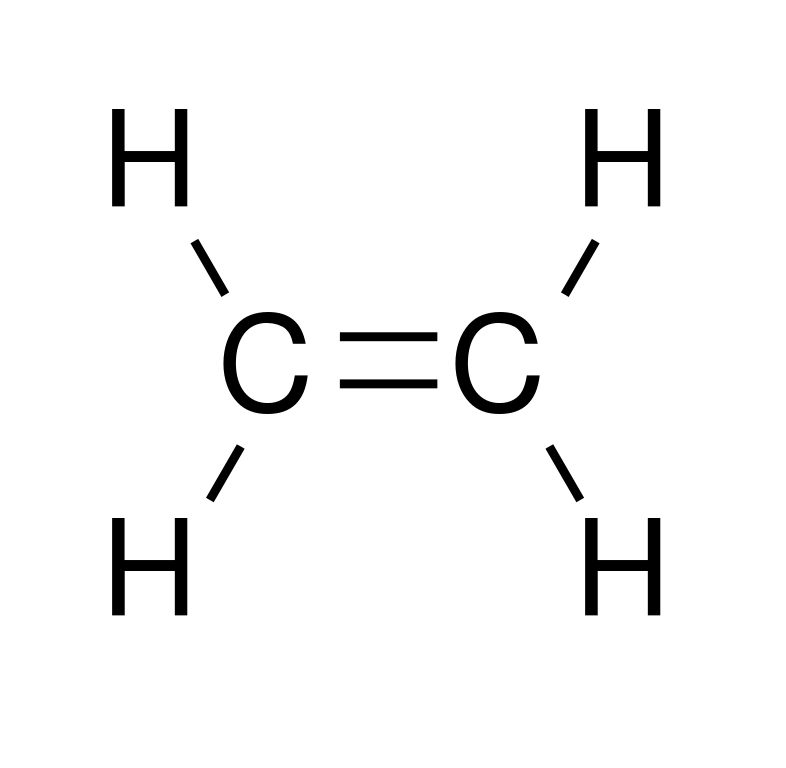 This highly orchestrated process of ethylene culminates in the zone of peak attraction. After this, decay sets in, wherein yellow bananas starts becoming spotted and yellowish-black flecks start becoming more prominent. The self-destruction stage called senescence then begins, and the banana turns black with intermittent yellow patches. The banana, at this point, is no longer in a state to be consumed.

Do bananas go bad in the refrigerator?

If by “go bad” you mean that does the banana peel turn ugly brown and spotted, then yes, they do go bad in the refrigerator. However, if you also assume that the inside gets mushy and distasteful, that’s not correct. Surprisingly, despite the banana peel quickly turning dark brown/black inside the refrigerator, the part you eat remains good and edible. In fact, Chiquita and Dole, the two most respected banana-producing companies in the US, recommend this to make the banana last longer in its ripe phase.

Storing bananas in the refrigerator once they reach optimal levels of ripeness, NOT BEFORE, will dramatically impede the conversion of starch into sugars, almost to the point of stopping the ripening progress. 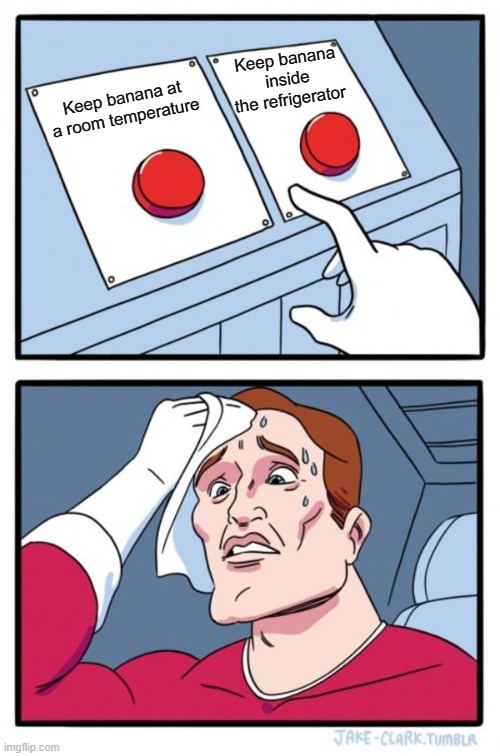 The outer peel of the banana will start appearing brown or black because the polyphenyl oxidase enzyme in the fruit starts polymerizing phenols in the peel into polyphenols. Surprisingly, besides the unappetizing brownish yellow peel, there won’t be many negative effect in the core flesh of the fruit. Pare the dark peel off and throw it away. What you’re left with is the flesh of a banana that is still quite edible and sweet.

There is a caveat though… Don’t refrigerate the bananas before they’ve reached the edible level of ripeness. Chiquita warns that if you refrigerate an unripe banana, they may fail to resume the ripening process even after being brought out of the refrigerator to room temperature.

Now that you know the science behind the ripening of bananas and the reason for its color change, let’s look at how, throughout history, humans have hacked the process of banana ripening and what contemporary methods are used today for that same purpose.

How our ancestors hacked the ripening process

The power of ethylene gas, the main mastermind behind the fruit’s ripening, has been used by humanity for centuries. Ancient Egyptians used to slice climacteric fruits like figs to trigger the discharge of ethylene gas to expedite the ripening process of fruits like banana. Chinese farmers, on the other hand, used to ripen pears by burning incense sticks in storerooms filled with freshly harvested fruits. Scientifically speaking, the adage “one bad apple spoils the lot” refers to how the discharge of ethylene gas from a decayed apple (or any other climacteric fruit for that matter) will promptly ripen other apples in the proximity—and eventually lead to their decay as well. 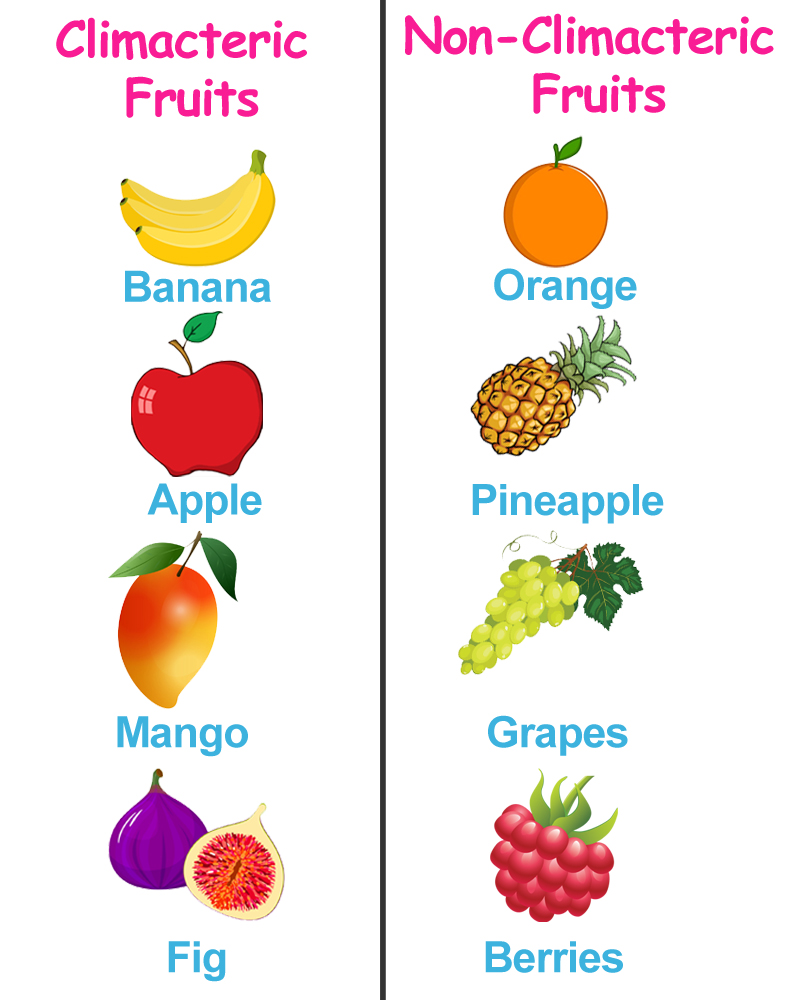 The ethylene gas comes in handy for banana cultivators, distributors, and sellers. Generally, for the distributors, the worst thing would be a pack of fully ripe yellow bananas, because they run the imminent risk of senescence—a decaying phenomenon we covered earlier.

Distributors generally pick bananas a week or two early, when they aren’t ripe—but are instead green and hard. They are shipped in this stage, as it gives distributors breathing room for transporting bananas to the warehouses without bruising and staling. Warehouses are often controlled rooms with precise temperature, oxygen, and carbon dioxide levels to further delay ripening, if required. It’s similar to putting fruit in sort of a hibernation until they reach retailers or supermarkets.

Distributors tactfully use ethylene gas to partially ripen fruit before their final distribution to the market if they are hard and green. Industrial ethylene used for this purpose is produced by mixing liquid ethanol with some catalytic generators that release ethylene gas. Generally, around 1000 to 2000 PPM (parts per million) is required to get bananas prepared for consumption within 24-48 hours. 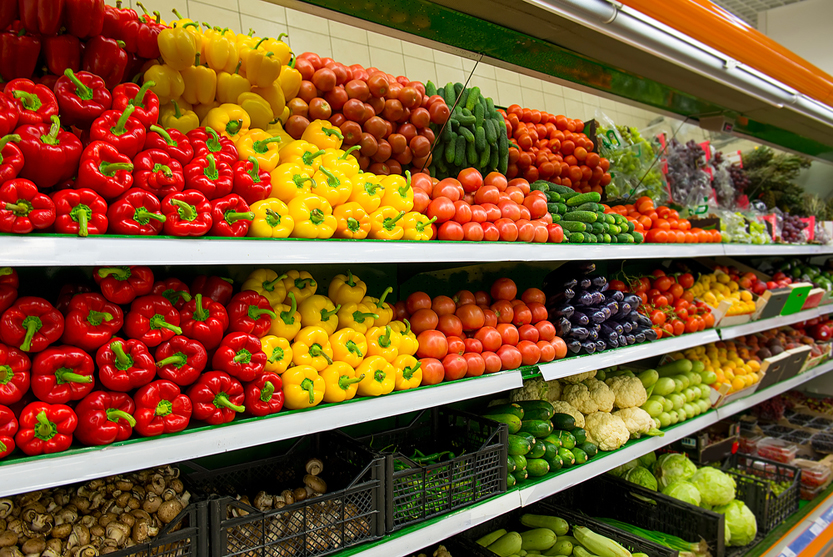 Fruits and vegetables on the shelf inside a supermarket (Photo Credit : Irina Sokolovskaya/Shutterstock)

It’s also interesting to note that the whole setup of the supermarket’s fruit and vegetable section is designed to optimize their freshness. Aisles of supermarkets are tactfully engineered, keeping ethylene in consideration. As ethylene gas can lead to decay in non-fruit parts, like lettuce, asparagus, etc. they are generally kept away from fruits that are notorious for emitting ethylene.

So, the transition from hard green to ripe yellow to stale black consists of a nicely orchestrated set of biochemical and physiological processes, similar to the changes we experience as we grow from childhood to adulthood during puberty. Moreover, we have discovered a way to hack ripening by tinkering with ethylene gas to ripen bananas faster and customize the process for our consumption!