Flightless birds belong to a group called the ratites: Ostriches, Cassowaries, Rheas, Kiwis, Moas, and Emus are members. Typically, flightless birds lack the keel bone, a bone that tightly attaches itself to the pectoral or flight muscles of flying birds.

If you ever feel bad about having to stay home while your friends go out and party, just remember that some birds are forever grounded. In fact, an astonishing 10,000+ birds don’t enjoy a bird’s eye view.

So, while their cousins rule the skies, flightless birds, well, rule their territories. Just as losing a sense heightens other senses, these birds are pretty unique in their own ways!

Flintstones of the Bird World

Flightless birds’ ancestors were studied and their fossil DNA was molecularly dated to reveal that these birds saw an evolutionary turning point when the dinosaurs went extinct about 65 million years ago. With their newfound freedom from predators, these birds scoured the land for food, bulking up in the process to store more fat reserves for greater efficiency.

Also, when flying is such a costly affair, energy-wise, flapping your wings without reason seems futile. So, on the ground they stayed, until they could no longer fly. Since the lineage of these birds can be traced back to the Mesozoic Era, Sir David Attenborough granted them the title of “Flintstones of the Bird World”. A Tinamou, one of the ancestors of flightless birds (Photo Credit : casa.da.photo/Shutterstock)

What sets ratites apart from their avian cousins?

Flightless birds belong to a group called the ratites: Ostriches, Cassowaries, Rheas, Kiwis, Moas, and Emus are all members. Typically, flightless birds will lack the keel bone, a bone that tightly attaches itself to the pectoral or flight muscles of flying birds. This leaves the ratites with a flat breastbone. Moreover, their wings are a size too small, so to speak, while their bodies are extra large, so the wings are unable to garner enough strength to lift the heavy bodies to which they are attached. The hollower bones of flying birds give them a lighter skeleton for an effortless take-off, while the thick feet and heavy leg bones of the ratites do not support flight and are more adapted to life on the ground.

Birds of the same feather? Not quite.

Back when Charles Darwin was doing his thing, he predicted that the ratites were relatives of each other. Some keen observations made around the same time by Thomas Huxley revealed that the roofs of the mouths of flightless birds possessed an arrangement of bones usually seen in reptiles. Volant or flying birds, on the other hand, lacked this arrangement.

The giant moa, which no longer exists today, was found to be the ancestor of the flightless birds we know today. Its closest relative, however, is a very much alive tiny South American bird that can barely lift itself off the ground—the Tinamou. The Tinamou didn’t quite fit into the ratite profiling either. Their keeled sternum tied them to the evolution patterns of avian birds, but their palate bones sided with the ratites.

However, thanks to molecular biology, analyzing datasets has helped assign the Tinamous a spot on the evolutionary tree, right next to their much more muscular, ostrich-like relatives, the Moas.

The members of the flightless bird family have evolved flightlessness irrespective of each other. Mutations in some of their genes has caused a loss of flight. As it turns out, this happened in up to five separate branches of the ratites’ family tree. Some birds you don’t have to search the skies for

There are 18 species of penguin, but you’ll never see one flying. You will, however, see them slide on their bellies or do their clumsy little waddle. Their wings are not just fluff, but are much shorter, stouter, and stronger than avian birds, allowing them to cut through the water, but not strong enough to hoist their fat-rich and muscled bodies up into the sky. A penguin’s flippers are what make them unique; they’re the only birds with fused wing bones that don’t fold. The steamer duck group has 4 species, 3 of which can’t fly. However, even among the species that can, the males are not so lucky, as they’re simply too heavy.

Wekas are chicken-sized birds of New Zealand. They’re almost fly-ready, with heads and legs resembling those of avian birds, but their wings just don’t agree on liftoff, so they resort to walking.

Speaking of chicken-sized birds, Kiwis from the land of Kiwis possess hidden vestigial wings, i.e, they no longer function. Unlike other birds out there, the nostrils of Kiwis are located way up near the tip of their bills. Ostriches are the present-day giants of the bird world, usually standing taller than you and me. Their flattened sternum or breastbone does not clear them for takeoff, but they’ll gladly take to the runway at astonishing speeds of about 72 kilometers per hour. That said, their walnut-sized brains are smaller than their eyeballs, so maybe they’re better off staying on the ground! 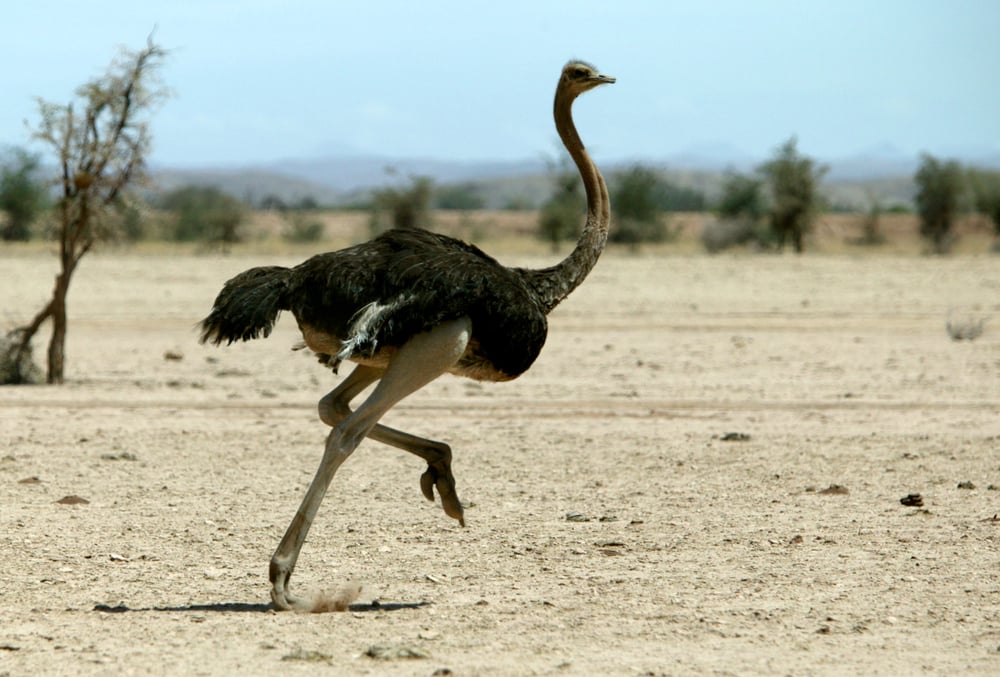 The owl parrot, or the kakapo, is also a New Zealander. Their short wings help them with much-needed balance. This is the only flightless parrot in the world, and not surprisingly, the heaviest! With a face like an owl, the gait of a duck and the stance of a penguin, this parrot looks like a jigsaw puzzle gone wrong. Takahes are flightless birds that use their wings when it’s time to find a mate, displaying their blue-green plumage aggressively. Thought to be extinct for almost a century, they surprised discoverers with their presence in 1948. They can live for up to 20 years—a fascinatingly long lifespan for a bird. Although they look like fattened purple swamp hens, they’re actually only distant relatives. Flightless birds or ratites evolved independently of avian birds, and their ancestors only really started to be themselves after the dinosaurs were wiped from the face of the earth. Since ratites didn’t need to fly to sustain themselves, they didn’t bother taking their wings for a spin round the block, and so they evolved to be grounded. Their heavy bodies, small wing bones, and flattened sternums are to blame for their flightlessness.

Today, flightless birds run free on all continents, but during the post-dinosaur era, the earth still had its landmasses clumped together, with a few more land splits than the Pangea or supercontinent stage. Thus, another burning question that boggled scientists was: If these birds were flightless, how did they go global?

One possible explanation could be the breaking up of Pangaea’s southern section, pulling apart and redistributing the ratite ancestral population. Endemically, these populations pooled in their district genes and evolved. This is why we see odd-looking bunches of ratites concentrated in different parts of the world.

So, the next time you go birding, you might want to position your binoculars below eye level—and watch where you step!