Colorful birds are a minority in nature. Most birds are dull colors, such as shades of brown, gray, white and black. Being colorful is expensive, and in the case of many birds, there has been very little pressure on being vibrant. Many male birds are the colorful ones, in order to attract a mate, while females often tend to have dull hues.

Have you ever played Angry Birds? Any explosive adventure is fun when you have a flock of wacky, fierce, brightly colored birds on your side. The Angry Bird I find particularly amusing is Red, the grumpy little guy with a crimson red body.

The character in the game named ‘Red’ is based on a songbird called a northern cardinal, mostly found in Canada and the United States. It is surprising, however, that the female cardinal doesn’t have a brilliant red color.

How does that happen? Have you ever wondered why some birds are so vividly colorful, while others are pale… even in the same species?

To answer that question properly, we have to know the basics of bird biology. 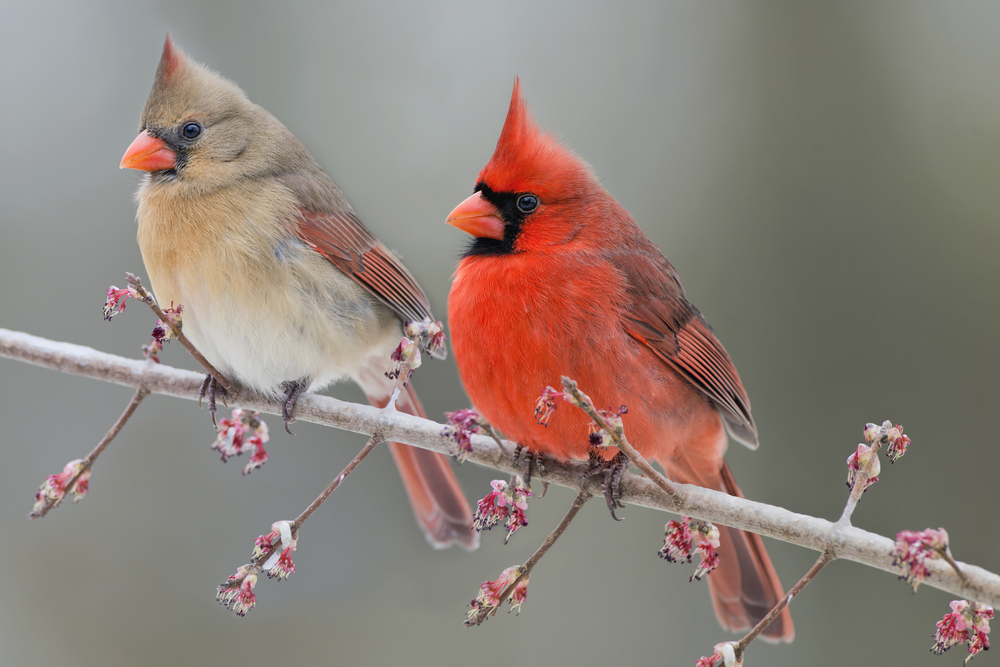 What are the most common colors we see in birds?

Have you seen any birds around your area lately? Ducks, geese and swans are a delight to watch as they float along lakes and streams. Pigeons and doves are a common sight in houses and farms. Based on where you live, sparrows, blackbirds, cuckoos, starlings, house finches, night owls, woodpeckers and crows may also be frequent visitors. Apparently, most birds have neutral tones, such as brown, beige, white, gray, tan and black.

There are several factors that come into play when it comes to avian plumage colors.

How do birds get their colors?

Birds get their colors from a few different sources, but primarily through pigments, the same stuff that gives color to our hair and skin.

Among the pigments, melanin in birds is responsible for shades of black, gray, brown and related colors. Birds, like humans, can produce their own melanin. However, they can’t make the other pigments by themselves. So what enables birds to look red, yellow, orange or… rosy pink? 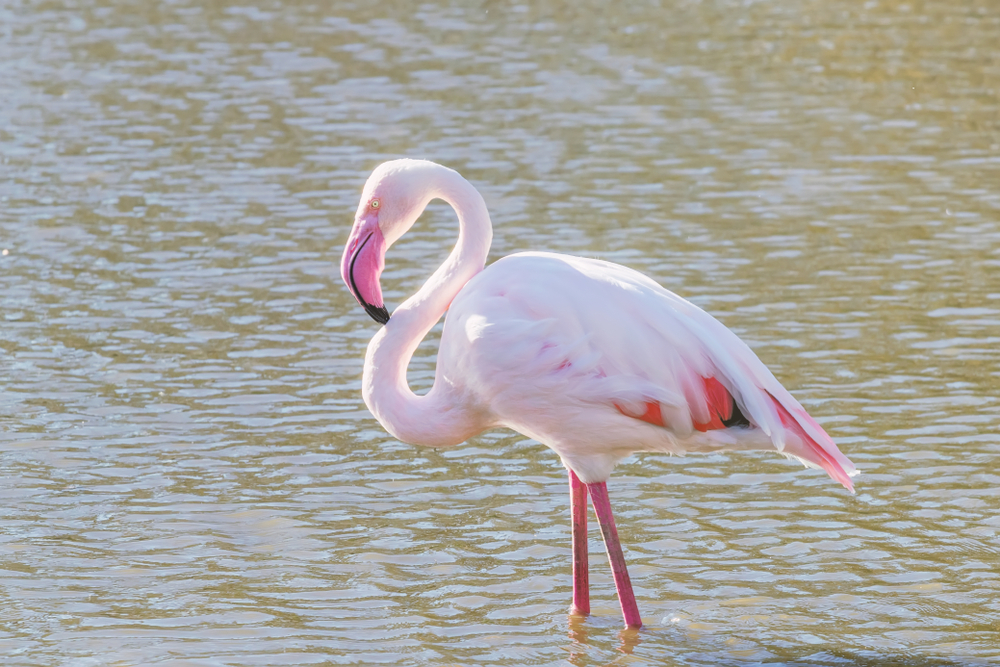 Did you know that flamingos aren’t born pink? Newly hatched flamingo chicks are actually dull gray in color. It is by feasting on algae and brine shrimp, a diet rich in carotenoids, that they grow up to have such fabulously pink plumage.

Carotenoids are pigments that give birds their brighter shades (reds, yellows, oranges and other vibrant colors). Some birds eat foods that are high in carotenoids, which will brighten up their feathers with dazzling colors. Another example is the northern cardinal itself. This bird enjoys eating berries dense in red carotenoids, which paints its plumage that bright red.

Colors are quite important to birds. Just as colors allow us to tell one bird from another, birds also recognize each other individually (and different bird species) by their calls, patterns and colors (or lack of color).

Coloration lies in the eyes of the beholder

The other type of coloration found in birds is ‘structural colors’. If you look at a pigeon, you will see some shiny shades of green and purple around their neck. These iridescent colors are produced by structures called barbs and barbules, located on the bird’s feathers.

When sunlight hits the plumage, it works like a prism, allowing the light to split into a wide range of colors producing a beautiful shimmering effect. Thus, iridescent coloration depends on the special feather structure, as well as the angle of the person observing the bird. 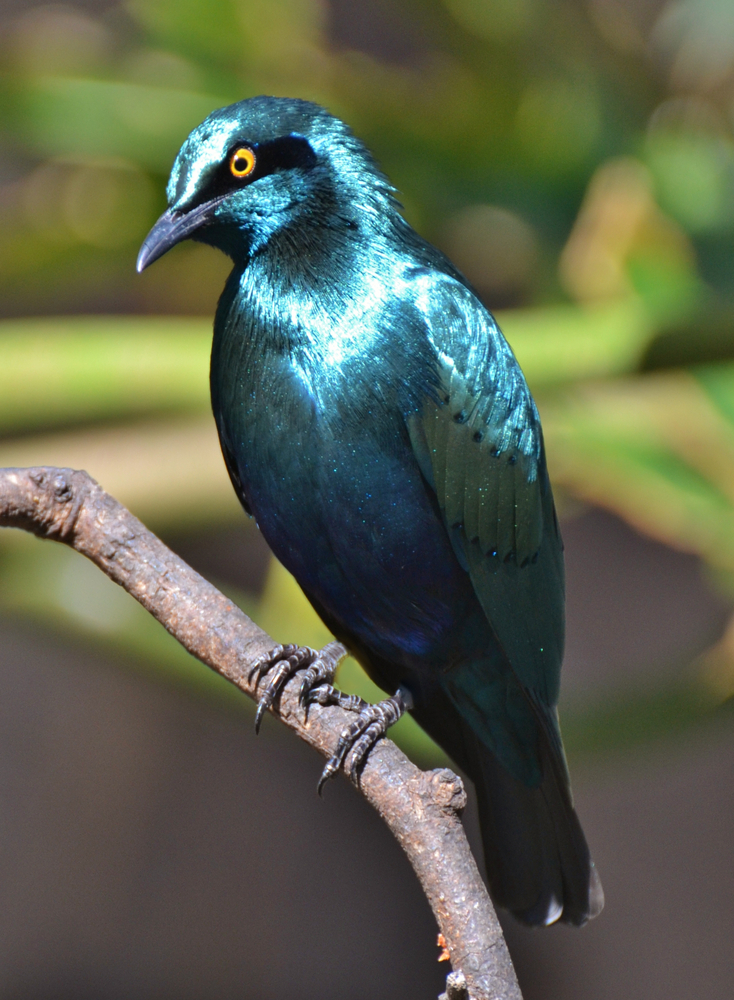 A strategy for survival?

Be it the American goldfinch, wood duck, or the ruby-throated hummingbird, most male birds appear very colorful, partiularly during the mating season. It is observed that they tend to show off their bright plumage (a sign of health and good genes) to attract mates. Female birds seem to have lost their bright colors over time (as they probably didn’t need to impress any other bird).

However, for many birds, drab and often colorless feathers serve as camouflage, allowing them to avoid detection by predators and keep their nestlings safe.

So, is having less colors a tactic to survive? Possibly. When the mating season is over, many male birds shed their colorful plumage and molt into dull-colored feathers.

Plumage coloration also depends on the size of the bird. Smaller birds have been found to have less colorful and contrasting feathers. Unlike larger birds, they do not face the risk of crashing into each other when flocking together. Besides, they are more likely to be eaten by predators, so they probably can’t afford to be too flashy. That’s why smaller species didn’t evolve such eye-catching feathers.

If colorful feathers attract predators, how do brightly colored birds survive in rainforests?

Tropical forests are full of colorful flowers and foliage throughout the year, so brightly colored feathers actually help tropical birds camouflage themselves. Also, a new study has shown that having access to many fruits and floral nectar aids the birds in developing more lively and rich feather colors.

The researchers also confirm that birds in colder regions are less colorful than those closer to the equator. They have suggested a possible reason, namely that birds living at high and low latitudes have access to less ecosystem energy, so their natural habitats do matter, in this regard.

Do birds see each other as colorful?

For example, the difference between a male and female blue tit bird may not be visible to our naked eye, but if you saw a male blue tit under UV light, you would see a brighter patch of crown on their head.

Research reveals that birds are likely to be more vibrant and interesting to their own kind than they appear to the human eye. They have extra cones in the retina of their eyes, allowing them to see ultraviolet ranges of colors that are invisible to us. This means that a bird you think is a bit dull may actually look quite different under UV light.

Let’s take a birds’ eye view of the whole picture.

As it turns out, many birds lack bright colors because they lack the feather structures or natural pigments (e.g., carotenoids, melanins and porphyrins) necessary for developing colorful plumage. Also, their dull colors might help them blend in with their environment to avoid predators.

Moreover, our ability to see or categorize colors is less powerful than that of birds. So, the next time you see a bird chirping outside your window, remember that there is more to its hue than meets the eye!