In whales, baleen is closely packed together, forming a brush-like filter that they use to feed. Ancient whales lost their teeth due to climate change and limited resources, but they eventually became filter feeders with baleen.

Whales are some of the most majestic creatures on the planet. These massive marine legends gracefully glide through the ocean like ballerinas. It’s quite hard to fathom that they can grow up to almost 100 feet in length. You would imagine that creatures this big must feast on only truly massive prey, but surprisingly, most of their food is actually quite small.

Although the sperm whale eats big animals like giant squids, most whales actually eat the smallest of animals, like krill. Krill are tiny crustaceans (prawn-like creatures) that feed on plankton. So how did the largest creatures on the planet end up feeding on some of the tiniest? 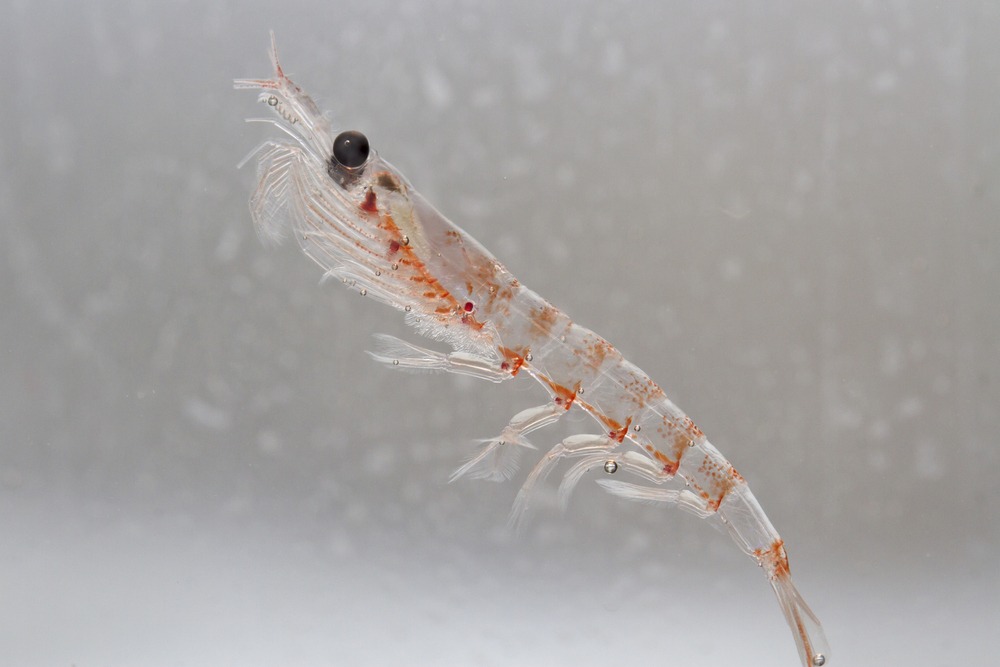 Krill are tiny crustaceans, yet they’re a major part of the diet of the biggest creatures on the planet. (Photo Credit : Tarpan/Shutterstock)

The Evolution Of Whales

Have you ever wondered why whales blow air when they come to the surface? If you don’t already know, this is because whales are mammals, which means that they breathe air and need air to survive. So how exactly did these animals that breathe air end up living in the sea?

Whales began evolving around 50 million years ago, originating from a prehistoric animal called the Pakicetus. This was a land animal and didn’t look at all like the whales you see today. In fact, Pakicetus looked a lot more like a dog. These dog-like animals eventually took to the sea and gradually evolved into whales.

This dog-looking creature is the Pakicetus, the first ancestor of whales and dolphins (Photo Credit : Zerosmany/Wikimedia Commons)

Pakicetus actually lived its life around water and used to eat fish; the only similarity they had to modern-day whales is that their hearing organs were similar.

Pakicetus fossils show adaptations for running on land, meaning that it most likely lived completely on land, but hunted in the sea.

To get better at eating fish, it eventually moved to the sea “full time”. The Pakicetus eventually evolved into the Ambulocetus. This animal lived in bays and estuaries (the places where rivers meet oceans). Analyses of their fossils show that they lived in freshwater environments. By following the evolution of these animals, we see how they slowly move from freshwater to coastal environments, eventually taking to the deep sea.

We all know how whales look today, but let’s be clear about what the Pakicetus has become. They have evolved into a large group of animals that are very diverse, called cetaceans.

Cetaceans is the order to which all whales and dolphins belong—a wide group of animals, with a broad range of adaptations. Dolphins and some whales (like sperm whales) have sharp teeth, which they use to hold onto their prey as they chomp down on them. However, if you look at whales, like the humpback whale or the blue whale, they don’t exactly have teeth.

Also Read: How Do Whales Survive By Eating Krill?

In place of teeth, there are these brush-like structures called baleen. While teeth are made of enamel and dentine, for the most part, baleen is made of keratin, the same material that composes your hair and nails. As you may have guessed, baleen is not as strong as teeth, but it doesn’t have to be. 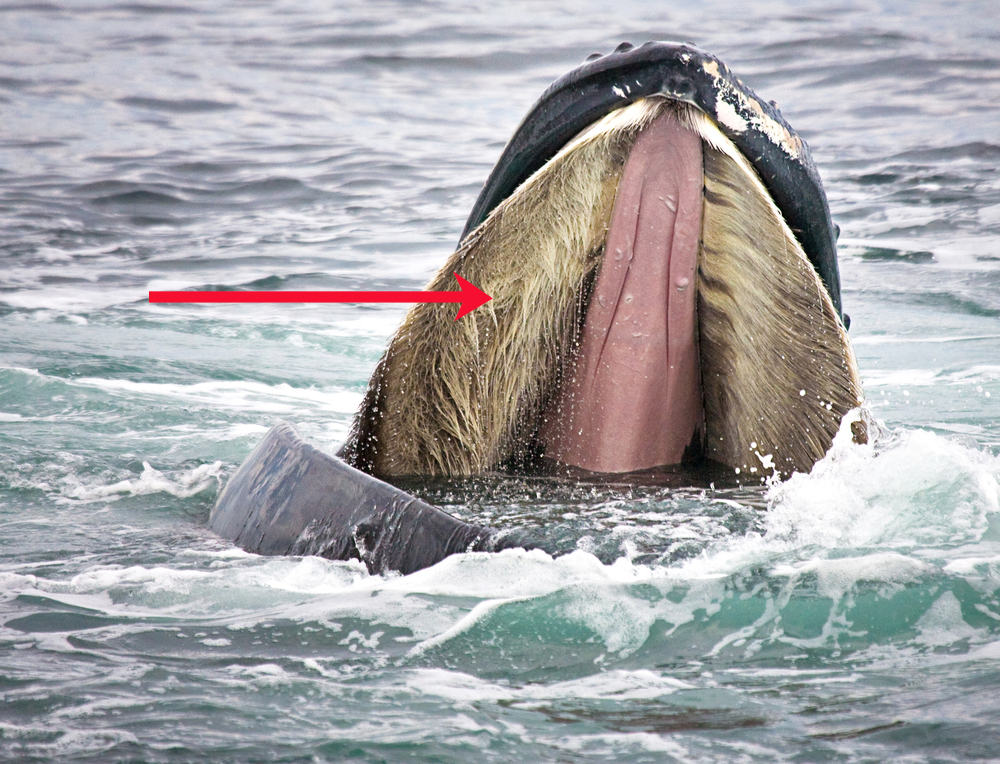 Those brush-like structures are baleen, what some whales have instead of teeth (Photo Credit : John Tunney/Shutterstock)

The Use And Evolution Of Baleen

Remember how we said that whales eat very small animals? Well, they don’t eat them one at a time. They eat thousands of krill in one big gulp… which is where baleen comes in!

Now, there are many methods by which whales suck in their rather minuscule prey. They can skim the surface of the ocean, or suck up the mud from the bottom of the ocean. Once their mouths are full they push everything out. While all the water and marine debris get pushed out, their food gets trapped in the baleen, which they then lick clean. 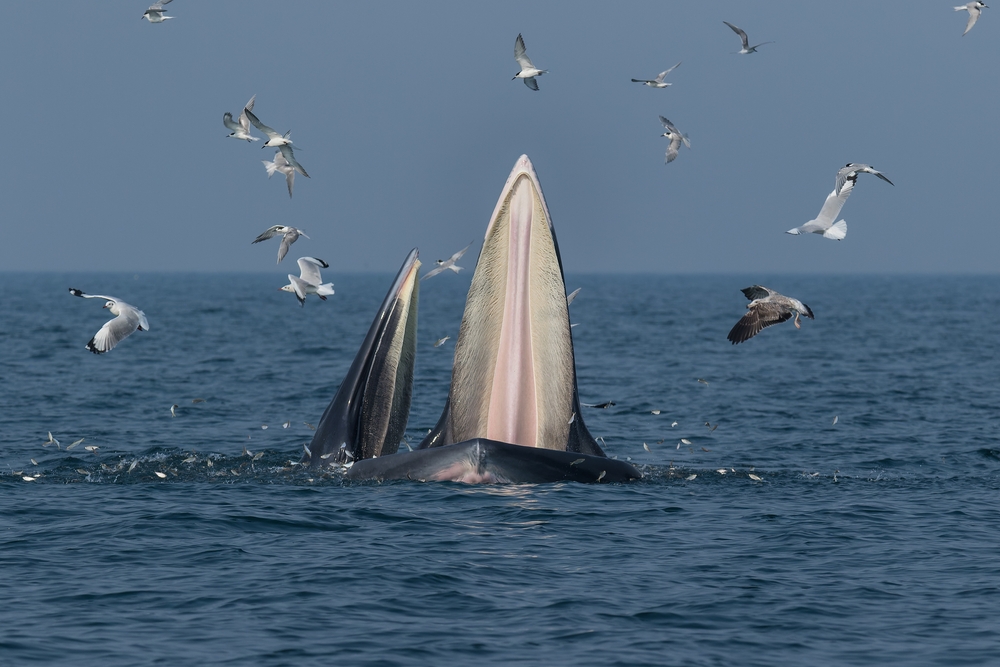 Whales like these gulp down a whole bunch of prey at once (Photo Credit : plains-wanderer/Shutterstock)

For the longest time, scientists believed that ancient whales with teeth slowly evolved baleen and while the baleen evolved—over many many generations—the teeth were eventually lost. However, in late 2018, new evidence pointed to something very interesting.

In 2018, scientists discovered the fossil of an ancestor of the whales called Maiabalaena. This fossil was very interesting because it showed no evidence of teeth or baleen! This means that this whale, one of the earliest filter feeders, would gulp down its food in one go. Although we’re not completely sure how this worked, we might have some idea why.

This whale existed during the Oligocene, a time of great climate change. This left the ocean short of resources for whales to feed on. Teeth would have taken a lot of resources to grow. So eventually, to save nutritional resources that were already scarce, they lost their teeth.

Also Read: Which Are The Largest, Longest And Heaviest Animals Of The Ocean?

When the ocean began to stabilize once again, resources were replenished and whales with baleen would have been more efficient in feeding. These whales would eventually evolve into the whales we have today.

All the studies that have brought us this interesting information come from very few fossils. It takes the best scientific minds to theorize how these whales evolved, but at the end of the day, they are still theories of which we cannot be certain. Only time and effort will help us understand more about how these majestic creatures became the way they are!