Whales, in general, are not capable of swallowing a human being and therefore will not eat you. However, there is a species of whales that does pose a legitimate challenge to that general theory: sperm whales.

Imagine you are on a ship sailing gently on the ocean, admiring the clear sky and the gusty breeze, until you notice something strange. Something lurks beneath the majestic waters. And, lo and behold, a giant whale leaps out of the water and crashes with a mighty splash. 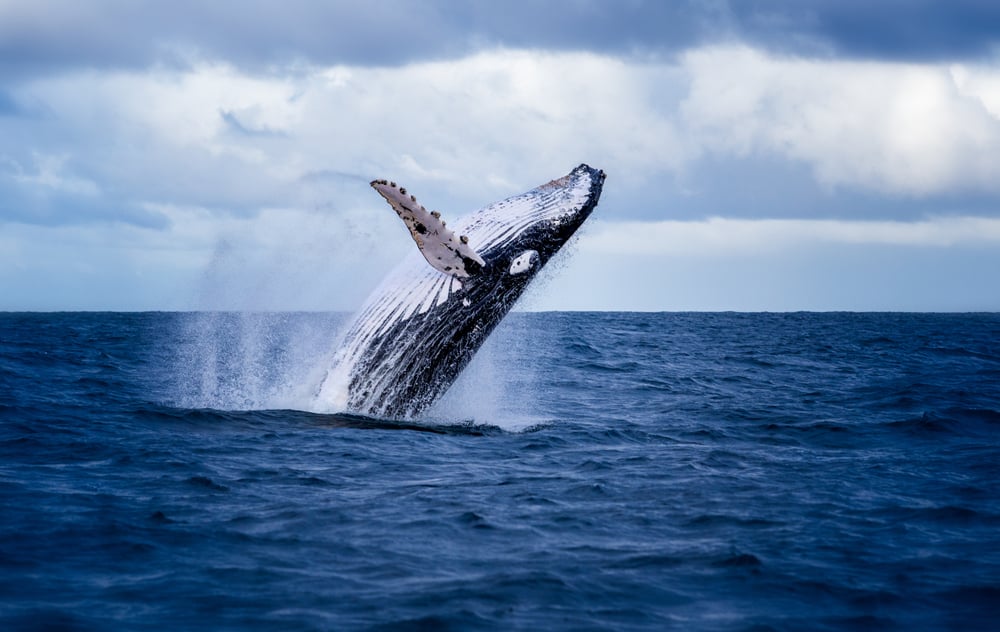 These images are stunning, and you will be overwhelmed by a strange mixture of awe and fear.

In the wake of such unforgettable encounters, you are likely to remember a few questions: Could such a massive creature devour you? Can you somehow survive in the mouth of a huge whale? Have such incidents ever occurred?

We will answer all these questions, but first we want to penetrate into the incredible dimensions of the largest species on our planet.

How big is a whale?

If you have never seen a whale before, it may be hard to grasp how colossal a whale can be. Blue whales are the largest of all whales, they can reach a length of almost 100 feet and weigh over 300,000 pounds. Their tongue alone can weigh as much as a full-grown elephant!

The body of a blue whale is so large that it can accommodate a few hundred people. However, despite its mammoth size, we need not worry about these big cubs of the ocean. They do not usually have sharp teeth to tear their prey apart. 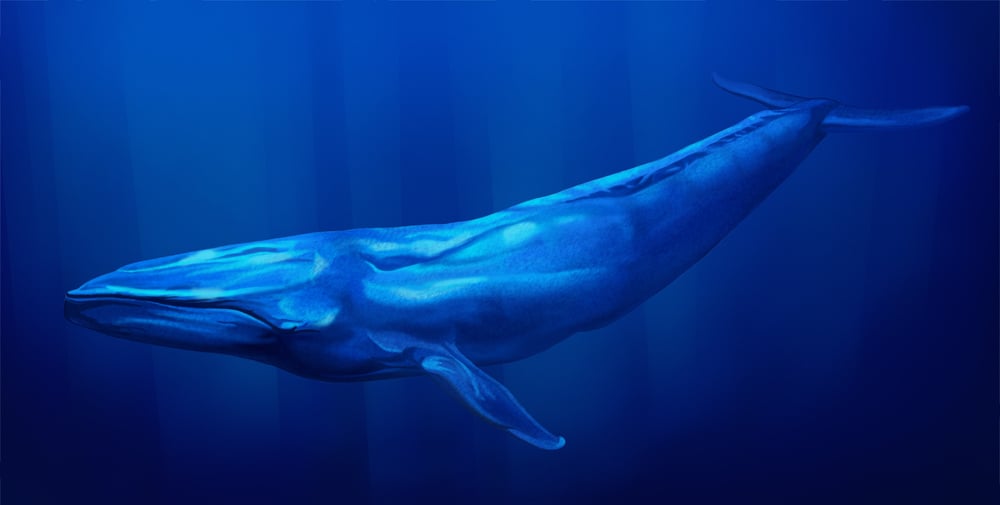 Their small toothed cousins – sperm whales – pose a much greater threat. A large adult sperm whale can grow about 1.60 meters long and weigh over 100 kilograms. Besides sharp teeth, they also have a good appetite. Sperm whales consume almost 3% of their body weight every day.

Getting a human into the mouth of a whale does not seem to be impossible. So were there such terrible cases where huge fish swallowed human beings?

If you are a voracious reader – especially in mythology – you may know that stories of people being swallowed by whales have existed for some time. One of the most famous mythical stories of such an event is that of Jonah from the Old Testament. Jonah is said to have been swallowed by a large fish. The most famous incident in recent history is a man called James Bartley, who has earned the nickname of the modern Jonas. 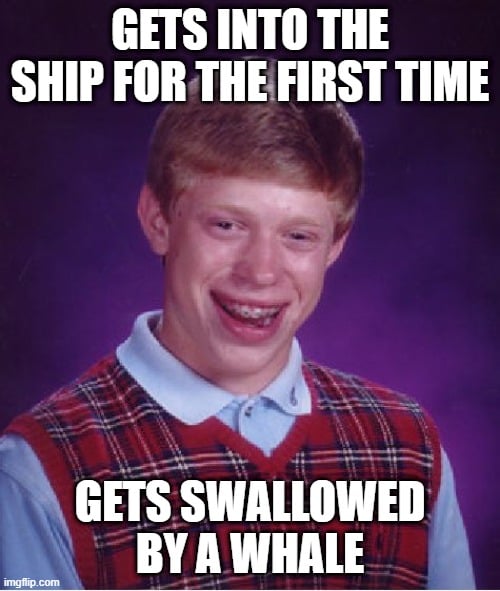 The story goes like this: Sometime in February 1891, a young sailor named James Bartley was on board a whaling ship named Star of The East. In the middle of the voyage, the crew members of this ship saw a large whale swimming off the coast near the Falkland Islands.

They dropped a few boats armed with harpoons to hunt the whale, but the small boats could not cope with the giant whale swimming around. However, one crew member managed to capture the whale and fatally injure it. The whale began to shake its tail and panicked and overturned a boat. About five members, including Bartley, fell into the water. They heard a loud roar from the whale, after which it disappeared for some time.

In the meantime, all the crew members were rescued, except for one: James Bartley. It was assumed that he had drowned. They searched for him in vain for a few hours. They had no choice but to return to the larger ship without him.

It did not take long for the whale to reappear, this time it was bloated and languishing on the surface. A team of sailors decided to take on this sea monster again. As they approached the whale, they realized that it was dead. They hung the dead whale to a winch and brought it closer to the ship. They attached it to the whaling ship and continued its journey.

Two days later, when someone examined this bloated whale, he felt something moving in his stomach. At first he tried to push it off, but then he heard something pounding in the whale’s body again. He informed other crew members about it and everyone was shocked when they heard the sound themselves. They decided to cut the whale open. When they made a cut through the whale’s body, they found a man inside the whale – James Bartley, almost unconscious, but very alive! 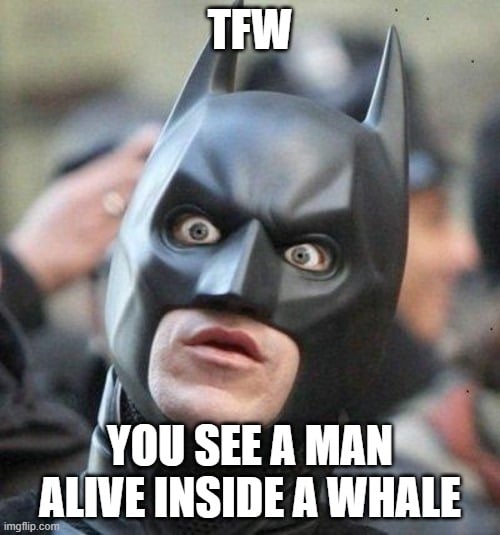 He had apparently survived for several hours or even days in the stomach of the giant creature. Although he was still alive, his face and arms were bleached white and he could hardly speak. He was taken to an enclosed cabin of the ship, where he recovered for a few days.

After a few weeks, he began making steady progress from his deteriorated health. He was eventually back in a state to tell his miraculous tale of surviving inside a whale! 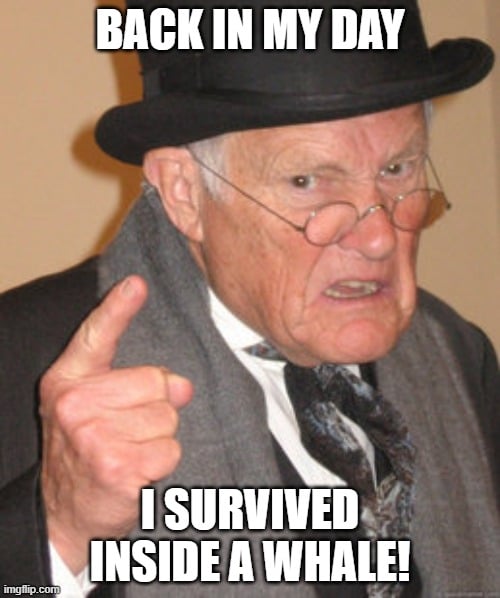 He is said to have told his crew members that he could remember being submerged in the water, and then he saw a huge whale coming towards him with its mouth open. In no time, he was inside the whale’s body. Inside, he was surrounded by darkness and automatically felt himself gliding through a narrow passage that was slimy everywhere. However, after a while, he blacked out and could not remember what had happened.

A few years later, New York World reported on this incident. Later, other print media in the US and the UK picked up on this story, earning the lucky sailor the nickname Modern Jonah. Bartley died 18 years later, and his gravestone in Gloucester, UK, reads: “James Bartley – a modern Jonah.”

Driving away the foam

A few decades later, a professor at Messiah College named Edward Davis picked up on this story and launched a formal investigation. He noticed a lot of factual inaccuracies in the story. He found out that while there was a ship called Star of the East at that time, there was no whaling ship as had been reported in the media.

After carefully examining dozens of papers from that time, he managed to find a list of sailors and other crew members who had boarded that ship. Interestingly, no man named James Bartley was mentioned on this list!

The wife of the captain of this ship wrote him a letter refuting the claims of a man who was eaten alive by a whale. She wrote, “There is not a single word of truth in the history of whales. I have been with my husband on the Star of the East all these years. There has never been a man who went overboard while my husband was in it.

The biggest mistake in this story was scientific, because even assuming Bartley had been swallowed by the whale, it would have been impossible for him to survive for several hours without oxygen in the mucous acid stomach! 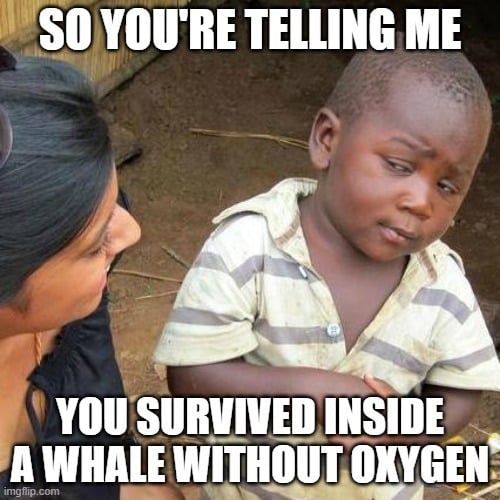 Can a whale eat you?

So, to return to the original question, whales are generally not capable of devouring a human, and it is very unlikely that a whale or any other giant aquatic animal would be interested in devouring a human.

For starters, most whales do not have the kind of teeth that could break through flesh and bones, and not just whales; any aquatic animal would need strong, specially constructed teeth to break up large mammals, such as humans, into pieces small enough to swallow and digest.

Certain whale species have no teeth at all. For example, all types of baleen whales are sometimes called “toothless.” To eat their food, which is not human, they naturally have baleen plates that have evolved to catch prey such as small fish and krill. Moreover, the esophagus of these whales is not particularly large, only a few centimeters wide, meaning that a healthy human adult could not fit through. 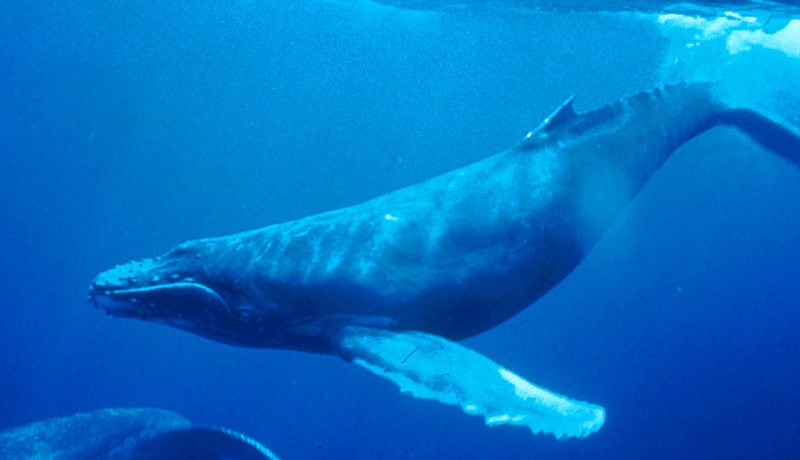 The toothy variety of whales called sperm whales are a bit of an exception. They have a large esophagus that is capable of swallowing large mammals, but their primary food sources are fish, squid, and octopus found in the deep sea. Although their gigantic persona can send shivers down your spine when you encounter them, they are generally considered harmless to humans, albeit for a different reason.

Sperm whales usually hunt about half a mile below the surface of the ocean. More specifically, a sperm whale often hunts 3,000 feet into the depths! This depth is much deeper than any human can swim, as the pressure alone would be unbearable.

Sperm whales hunt so deep in the ocean that scientists are still unsure how to find and hunt prey. In short, you need not be afraid that a whale will emerge from the depths and swallow you in a single gulp!

Is there any evidence that whales swallow humans?

A few years ago, a journalist named Ben Shattuck decided to do a bit of investigative journalism around the subject of whales that devour people, and he trawled through hundreds of records in the New Bedford Whaling Museum Research Library to get an insight.

Despite his exhaustive research, he could not find a single tangible report of someone being swallowed alive by a whale. Although he found records of sailors being injured by whales, and some even dying after getting tangled with a whale, none of the records mentioned that whales swallowed a human completely.

In summary, whales are generally passive creatures that do not seek to interfere with humans. However, if you engage with these marine mammals, you could lose an arm or a leg, even though they have no interest in feasting on you.

Despite the various stories of humans surviving in whales dating back to biblical times, it is scientifically impossible to be swallowed alive by a whale – and tell the story!

How much do you know about whales swallowing humans? 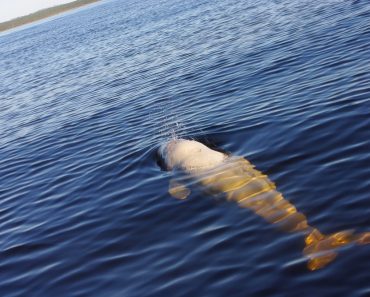 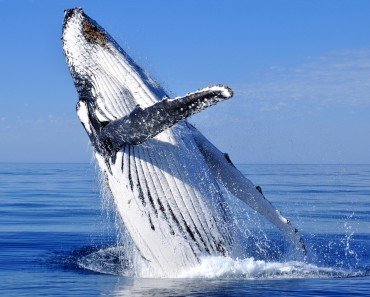