Scientists are not entirely sure what caused pouches to evolve on kangaroos, but they have noticed some evolutionary advantages to this part of the body. It requires less energy to develop, as opposed to a uterus. It also allows the female to forage for food while taking care of her young.

Kangaroos are amazing creatures. They have an amazing hopping ability thanks to their strong tail and legs, allowing them to push themselves 25 feet forward in a single leap! Another cool thing about kangaroos is the little pouch they have on their bellies. You can see how adorable it is when that little joey pops his head out as his mother carries him around! 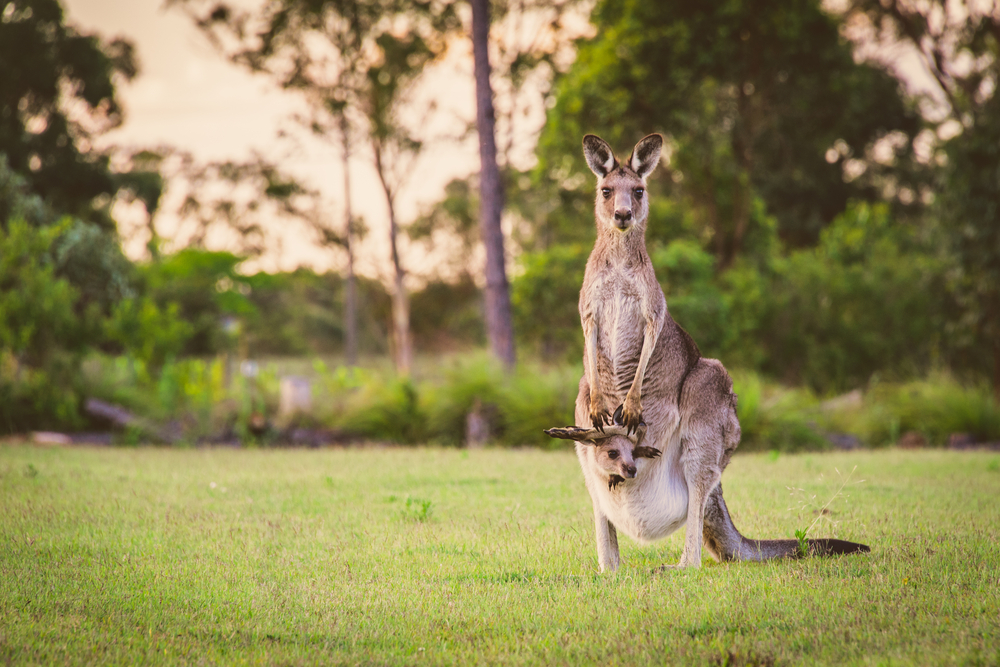 However, that’s quite an odd feature, don’t you think? You don’t often see pouches on the front of other animals. There are tusks, claws, fangs, wings and countless other features, but not many animals have pouches. In fact, you will only see pouches on marsupials.

Marsupials refer to animals like kangaroos, Tasmanian devils, wombats, opossums and many more. They are mammals like us, but can only be found in Australia and the American continents.

Their most distinctive feature, however, is the pouches in which they hold their young. These pouches are called marsupium and are found in all the marsupials, and even some monotremes (platypuses and echidnas). Now, not all marsupials will have a pouch as big as the kangaroos, as some will have just a tiny flap that covers the teat. But how exactly did this come about, and for what purpose?

The Evolution Of Marsupials

To understand marsupials, let’s take a broader look at mammals on the evolutionary scale. All mammals have fur on their bodies, and according to middle school science, all mammals have a placenta. However, when studying evolution in greater detail, you will find that is not exactly true. 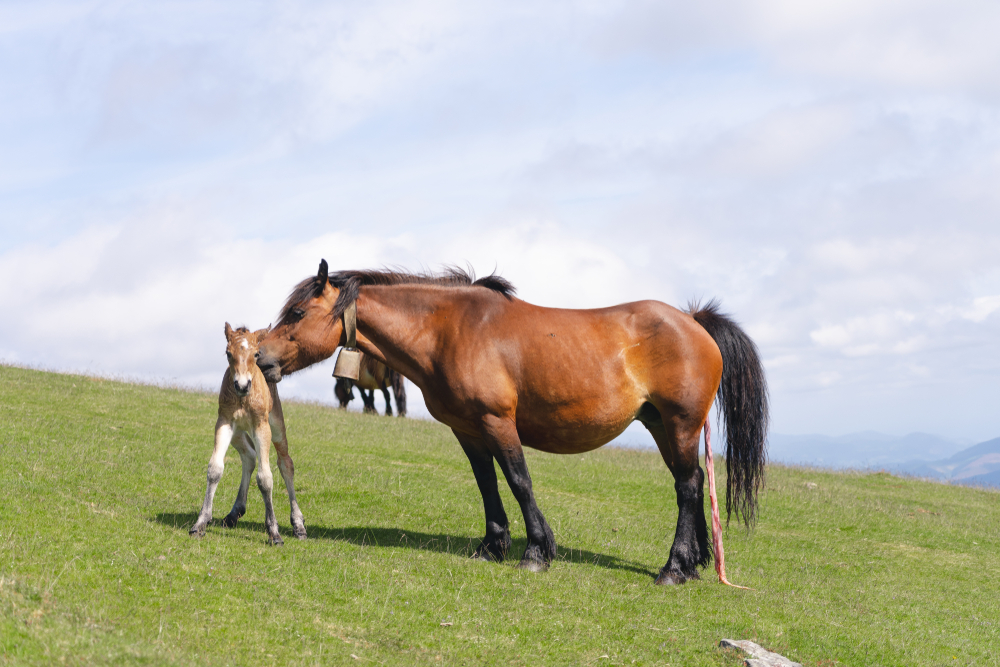 Eutherians give birth to young that are fully ready to take on the world. Look at this horse, already on its feet (Photo Credit : -Ruben Lopez Vilanova/Shutterstock)

This splitting happened somewhere in North America around 130 million years ago, These early marsupials first migrated to South America. At this time, all the southern continents were a part of one giant landmass called Gondwanaland.

Gondwanaland is how the ancestors of kangaroos reached Australia. They just walked from South America, across what is today’s Antarctica, and into Australia. Soon after they crossed over to Australia, the continents began to drift apart. The marsupials in Australia and those in America continued to evolve on different paths.

The pouch of a marsupial can differ from species to species, but they serve the same purpose—holding the young as they develop. However, it’s not just for fully developed young; it can also hold a still-developing youngling!

Also Read: Why Do Kangaroos Hop Without Seeming To Get Tired?

Marsupials are conceived like most other animals, with the sperm and the egg fusing in the female reproductive system. After that, a barely developed embryo exits the vagina and climbs into the mother’s pouch. In fact, the child develops its brain and forearms faster than the rest of its body. This helps it crawl before it is fully formed. 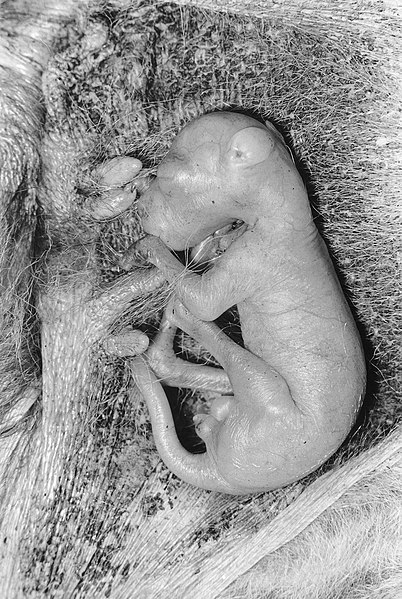 This Baby Kangaroo is still developing. It will stay in its mother’s pouch, continuously drinking milk till it is fully formed (Photo Credit : Ederic Slater/Wikimedia Commons)

Once the half-formed embryo crawls into the pouch, it attaches its mouth to the nipple. It will continue to receive nutrition from the mother while it develops in the pouch.

The Usefulness Of Pouches

Scientists are not entirely sure what caused pouches to evolve on kangaroos, but they have noticed some evolutionary advantages.

Marsupials evolved when resources were extremely scarce, and taking care of offspring requires a lot of energy. Basically, in a situation where they don’t have the energy to take care of their young, it is easier to terminate the pregnancy. This may seem brutal, but it would give them an advantage in difficult times. The pouch also means that less energy will be spent on developing the uterus, which holds and nourishes the baby.

The pouch would also allow the mother to forage with greater ease. The mother would be more aware of her surroundings and could eat without having to worry about her baby. These pouches seem to be useful in many ways, but what’s interesting is the way they evolved differently in different marsupials.

Some pouches are small, with only a thin flap to hold the baby as it develops, while others have a large enough pouch for a joey to jump into when it’s scared.

We all know that the opening of the pouch for a kangaroo faces upward. This seems logical, to ensure that the little joey doesn’t fall out while his mother hops around at 35 miles an hour!

Wombats, on the other hand, have backwards-facing pouches.

Wombats are animals that dig holes in the ground. If they had forward-facing pouches, their children would be getting truckloads of dirt into their faces all the time. The backwards-facing pouch helps them avoid a mouthful of dirt. On the flip side, their pouch opens right in front of their mother’s butt!

Also Read: How Do Mammals Give Birth? 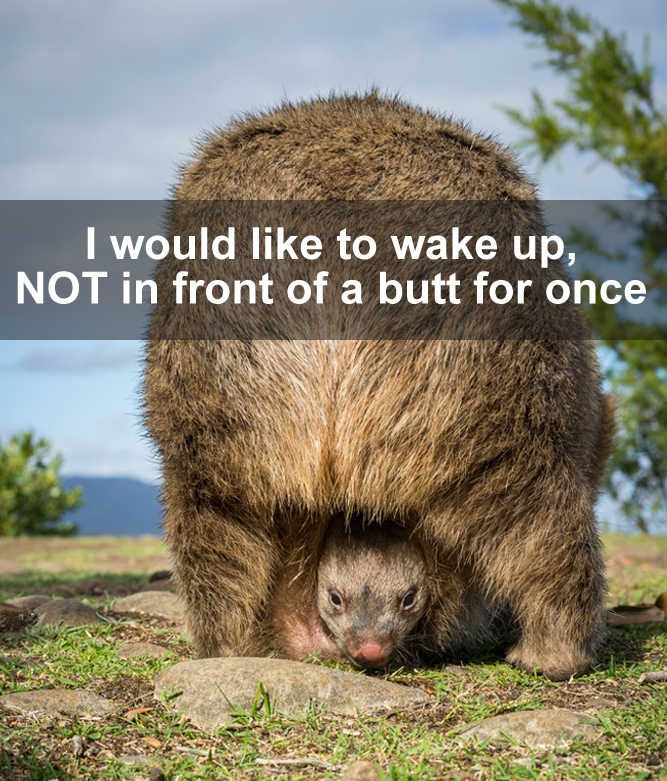 Look at this poor wallaby. Still better than getting mud shoved in your face all day (Photo Credit : -Jonas Boernicke/Shutterstock)

Understanding what exactly led to kangaroos developing a pouch would be extremely difficult. This happened 130 million years ago, and it’s very hard to figure out exactly what their lives were like back then. Whatever the reason was, it is a fascinating feature that has allowed or the survival of some uniquely adorable animals.