Understanding the change in chemistry of the air in theaters due to audience reactions can help us develop techniques for early cancer detection.

Imagine watching the final battle of Avengers: Endgame in a theatre. Thanos is about to push Stormbreaker into Thor’s chest. Everyone is holding their breath, waiting for someone to rescue him. Suddenly, Mjolnir lifts off the ground, hits Thanos, and returns to Captain America! The crowd gasps with joy, and the theatre is filled with cheers.

Undetected by your senses, something else has also changed in the theatre. The air around you is slightly different from what it was before Cap wielded the hammer. No, no one is filling the theatre with gas or any other substance… it’s you and every other human in the room letting the universe know how they are feeling with a chemical signal.

Sound intriguing? Then it’s time we take a look into how humans change the very chemistry of the air around us and what sort of insights this atmospheric dynamic can provide.

A set of experiments conducted by scientists from the Max Plank University of Chemistry and Johannes Gutenberg University revealed a very interesting phenomenon. Moviegoers release a mixture of tiny amounts of chemicals into the air in response to audio-visual stimuli from movies. The composition of air in a theatre will vary depending on what kind of scene is playing. Movies are generally screened in a closed and soundproof environment. Thus, every movie theatre has an air circulation system where ambient air moves in and out. The scientists assembled their experimental setup at the outflow vent, which opened up outside the screening hall. To detect the change in the chemical composition, the outlet was rigged with PTR-ToFMS (a type of mass spectrometer), an Infrared spectrometer, and a CO­2 detector.

Along with the CO­2 from normal exhalation,­ more than 100 other trace gases and their fluctuations were detected from the outlet’s air meters. To accurately correlate the change in the air to the scenes themselves, the instruments took readings every 30 seconds throughout the run of the movie.

The detectors observed a momentary jump in CO­2­ levels whenever there was a tense scene, primarily something that would raise a person’s pulse and breathing rate. In every screening of “The Hunger Games” observed in the study, the Isoprene levels in the air peaked during the scene when the heroine’s dress catches fire (Isoprene is a volatile organic compound released by our body during cholesterol synthesis). 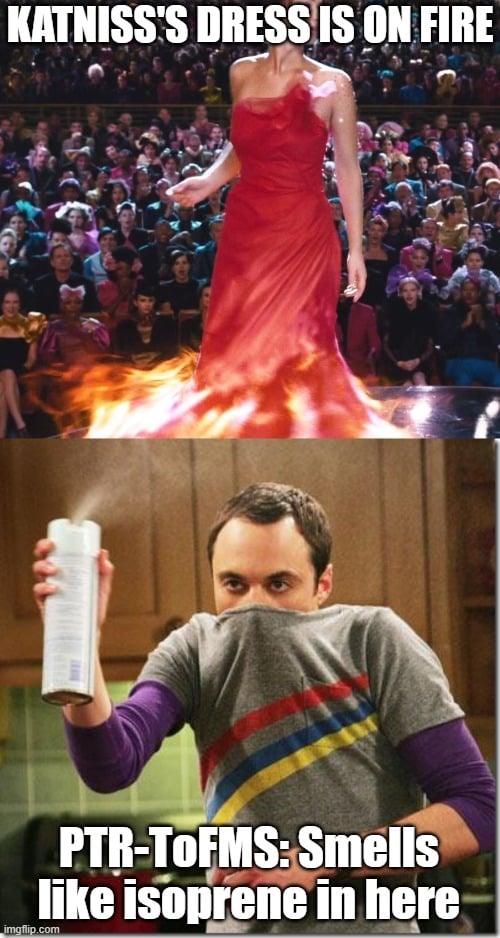 In scenes that invoked breath-holding, gasping, or twitching, the detectors saw a rise in acetone concentrations. Acetone is a gas released by our body as a byproduct of fat catabolism. Scenes that depicted injury induced a release of methanol, acetaldehyde, butadiene, and 2-furanone.

After multiple screenings of 16 movies over a period of weeks, scientists discovered that the strongest collective chemical response was for suspense and comedy sequences. Thousands of moviegoers unknowingly but synchronously broadcasted similar chemical signals into the air during these scenes. So, what does this mean for us as humans?

Human Volatolome And The Detection Of Diseases

Every organism on this planet has its own genetic material, referred to as its genome. Similarly, every organism releases a bunch of volatile organic compounds (VOC) into the environment through different bodily processes. These VOCs are collectively known as the Volatilome/ Volatome. The VOCs are low molecular weight chemicals released by our body during different metabolic activities. Recent studies have revealed that humans emit ~1,800 different volatile organic compounds through the skin, exhaled breath, and other body parts.

The VOCs mirror the metabolic and psychological changes happening in our bodies, and the information provided by these chemicals are biomarkers that can help us monitor our health. The VOCs are basically reporters that deliver news on what’s happening inside our body and broadcast it to the world outside.

The detection and analysis of these biomarkers can point us towards numerous diseases. For example, a musty odor on someone’s breath indicates liver problems, while a strong smell of acetone on one’s breath could be a sign of diabetes. Recognition of biomarkers could increase our ability to diagnose cancer at early stages using non-invasive techniques. Scientists around the world are working on the identification of VOC biomarkers related to cancer, infections, and other chronic diseases.

Understanding the murky waters of human volatilome can unlock a whole new world of possibilities. From developing non-invasive diagnostic tools to helping out with urban search and rescue programs after man-made or natural calamities, these tools will only push us further towards safety and preparedness.

A system that rates movies based on changes in the chemistry of the air in the theatre might be far off, but detectors that can recognize VOCs related to emotions like amusement, suspense, fear, or anxiety could certainly help us design a definite method for detecting different mental health issues.

Also Read: How Does Your Sense Of Smell Work ?

Also, just imagine all the things we could do if we had sensors that could detect the subtle chemical hints broadcasted by our body as easily as our attention is grabbed by the smell of fresh cookies in the oven!

Test your understanding on chemistry of the air in theaters.