The brain cannot multitask. Brain regions like the frontal and parietal cortex control what and how the brain pays attention.

“Are you deaf? I’ve been calling you for the last 5 minutes!”

Engrossed in the idiot box or on our smartphones, you don’t hear someone addressing you. You plead your case saying “Sorry, I didn’t hear you!” But obviously, you’re not believed. But, that momentary deafness is real. You really didn’t hear anything. This is a common side effect of your brain focusing that it goes a little deaf or in cases blind as well.

These instances raise an interesting implication, the brain must selectively pay attention to some things while ignoring others. If so, how does it do that?

Why Do Our Faces Look So Weird In The TikTok Inverted Filter?

“Everyone knows what attention is. It is the taking possession by the mind, in clear and vivid form, of one out of what seem several simultaneously possible objects or trains of thought. … It implies withdrawal from some things in order to deal effectively with others…” Notes William James in 1890 in one of the earliest discussions about attention (The Principles of Psychology, pp. 403–404).

You’ve been paying attention to things all your life. You’re doing it now as your eyes and brain attend to decoding the weird symbols on the screen. But, just to show you how your attention works, let’s do a little test. Watch the following video and pay close attention to the instructions that appear on the screen.

If you’re reading this, you’ve either taken the test (great!) or skipped ahead (boo!).

If you did watched the video, did you notice the gorilla amble across the screen? No? Try again and see if you can spot it.

This experiment was performed by researchers Christopher Chabris and Daniel Simons on a bunch of college students (offered mere chocolate bars as thanks). They showed their undergraduate guinea pigs the gorilla video and noted how many of them noticed the Gorilla. Almost half didn’t.

I showed the video to the people at the office and many didn’t spot the gorilla. When I pointed it out to them, they reacted with disbelief, surprise and alarm. “I was staring right at the screen. I swear it wasn’t there!” they say.

This research won the Ig Nobel Prize, a prize given to improbable and slightly wacky scientific inquiry. Besides being entertaining and viral on the internet, it exposes our flawed brains to us. It confronts us with what psychologists call inattentional blindness.

Inattentional blindness isn’t literal blindness. It is the failure to notice something unexpected, like a gorilla in a basketball match, when one is focusing on something else, like the number of passes. Your brain ignores all other information that isn’t necessary to the task you are concentrating on. While you were watching the video, the passes were of utmost importance. The gorilla’s presence wouldn’t help you with counting the number of passes.

And this is how the brain pays attention in real life as well.

For a more relatable example consider the following scenario. You’re at a party. There is free food, flowing drink, groovy music and a whole lot of talk. You’ve met a school friend after ages and begin to catch up on missed moments. The two of you reminisce about that Maths teacher with the weird accent. You’ll notice (or won’t) that you don’t have any trouble holding a conversation with your friend. All the background chatter and the groovy music never bothers your conversation, almost like you are deaf to it.

This is what fun people call the ‘cocktail party effect’ or what the serious ones call selective hearing or inattentional deafness.

Parts of the brain involved in paying attention

Take a moment to look around you right now. There are a hundred different things that you could focus on. All the visual stimulus (should you read the words, look at the font or all the recommended articles on the right-hand side?) around you, the cacophony of sounds, the smells (or lack of them), and how the body is positioned.

It is impossible for your brain to process all this information at once. Instead, it takes the easy way out, focusing on a few things and tuning out everything else.

There is no attention center in the brain doing all this. Attention unlike fear, which neuroscientists have largely pinpointed to the amygdala, involve different areas from all over the brain. These networks involve multiple sensory systems and higher cognitive networks in the brain. Discussing them all would be like writing a neuroanatomy textbook. So, for the sake of brevity and not losing your attention, I’ll discuss the parts broadly.

All the brain regions in this main attention network are connected to either decoding and interpreting sensory or motor information. One notable region of the brain involved in this network is the Frontal Eye Fields (FEF). It is involved in controlling our eye and head movement when we see things. This suggests that looking directly or tilting one’s head towards a sound seems to be necessary to focus, like how we might slightly tilt our head towards interesting gossip we want to hear.

The ‘thalamus’, a part located in the lower portion of the brain deep within it, is involved in sifting through information of the plethora of sensory inputs we receive at any given moment. The ‘thalamus” is frequently called the ‘relay station’ as it relays information to and from the higher brain regions like the prefrontal cortex. It is like a post office sorting post to be delivered to the right address out of a large pile of information. It seems to do some of the information sorting and discarding required for our attention.

The structures listed, and those not mentioned, work together to process information and what gets attended to and what doesn’t. Inattentional blindness and deafness is result of this prioritizing.

Why does this matter?

Does it matter to know about how we pay attention?

It matters because besides annoying your mother or not noticing a silly gorilla sashaying in a psych test, how we pay attention can reveal how our attention is fallible.

Take driving for example. A distraction while driving could lead to a moment of blindness and the difference between life and death. 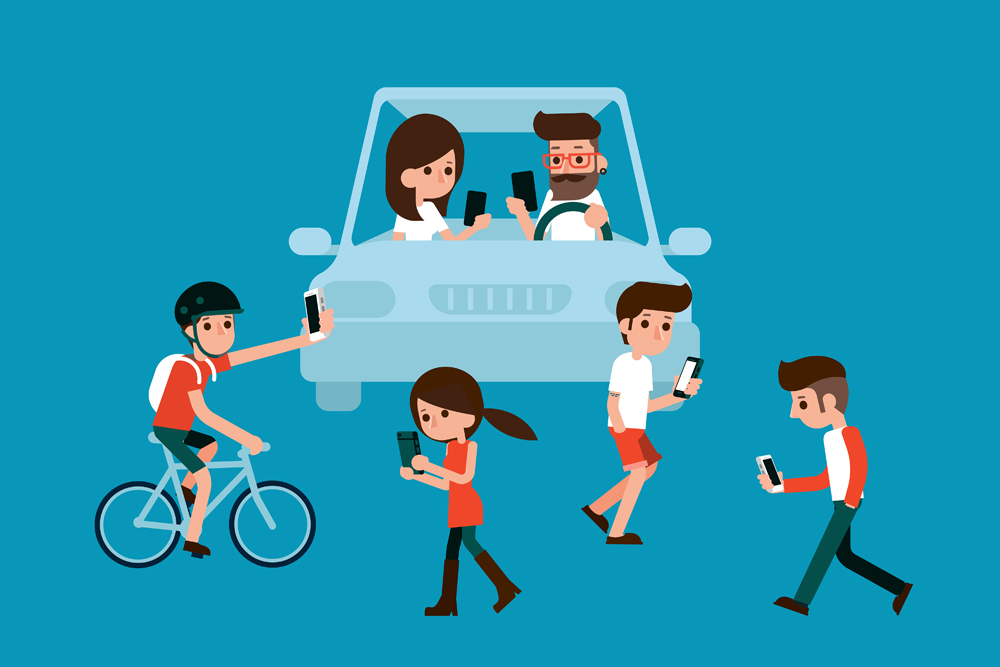 Your brain wasn’t made to text and drive at the same time. (Photo Credit : Bplanet/Shutterstock)

Or consider those working in high-pressure environments. a medical practitioner administering a drug to a patient. A slight diversion in attention and instead of administering the right dose, the patient might receive an overdose or the wrong drug.

These are real-life scenarios that could happen and little slips like this could be life-threatening.

Studying the brain, how it processes information, and how it attends to that information allows us to create methods to prevent such accidents and other casualties from happening. Examples abound where an understanding of how quickly the brain can switch attention from one task to another, such as in air traffic control, could prevent mistakes.

It also has implications for neurological disorders such as ADHD and those caused by accidents.

Paying attention requires effort. Our brain has a limit on how much energy it can consume, and multitasking is too much of an energy drain. In order to not overheat and combust, our imperfect brains devised a compromise, it neglects any information it doesn’t think it needs for a specific task.

The next time you’re reading or watching TV and don’t hear your mother yelling out your name, just tell her it wasn’t your fault.