Remember all those times when you used to feel like a drunkard after a wonderful spin on the merry-go-round? You were barely able to stay on your feet after getting off that rotating pleasure craft, but don’t worry, you aren’t the only one. Human beings often feel light-headed and dizzy after experiencing an intense spinning motion.

Some people feel dizzy just by getting off the sofa too fast, but this dizzying effect is called vertigo.

Is there a Biological Explanation?

Of course! In fact, physics and biology are both involved in this phenomenon.

The physics side of this feeling is due to inertia. This is one of the fundamental laws of physics, which states that a body will resist any change to its state of motion. It will remain at rest unless an external force is applied to it, and will remain in motion unless it is forced to halt. This, along with a complex system in our inner ear, is the reason for dizziness. 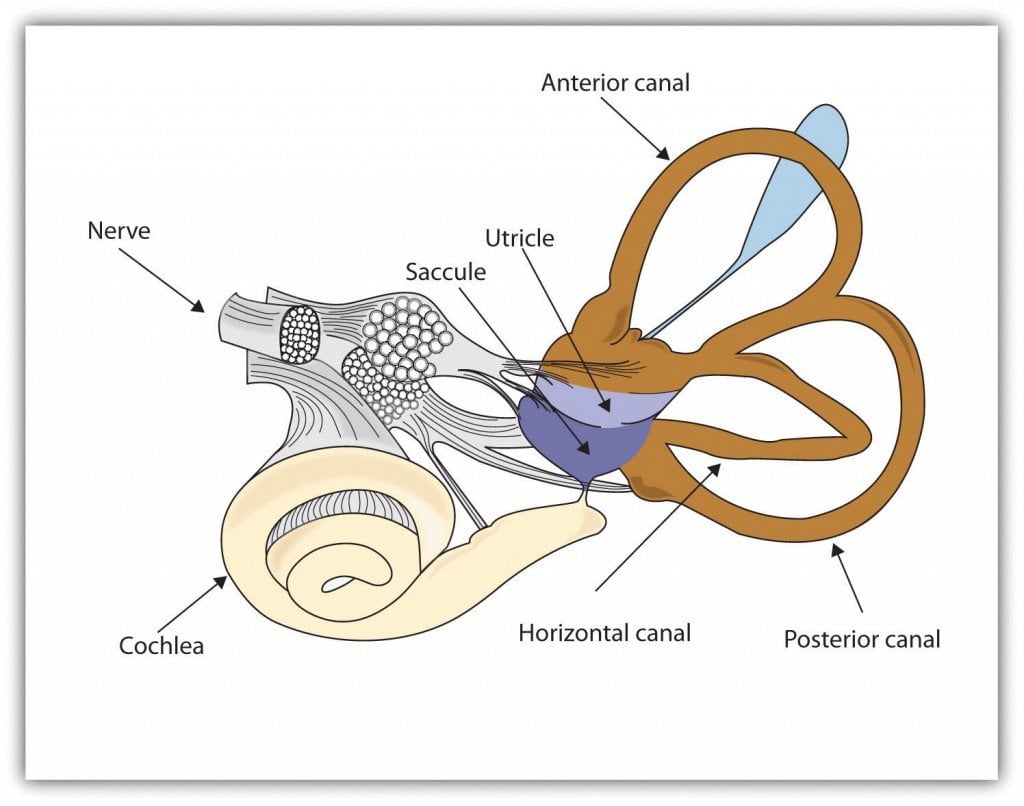 The vestibular system with the three canals.

This system in the inner ear is known as the vestibular system, and is responsible for maintaining the balance of our bodies. Through this system, our body senses whether it is upright or lying down, or whether it is in motion or standing still.

In the labyrinthian structure of the inner ear, there are three semicircular canals arranged at right angles to one another, such that each of the canals individually senses movement along the 3 axes. These canals are filled with a fluid called endolymph, which sloshes around as our bodies move. This endolymph resists changes in motion, and due to the inertia of rest, lags behind, which stimulates the nerve cells. These nerve cells come in the form of small hairs (roughly 20,000 fibers), which transmit the messages to the brain. How semicircular canals adjust according to our motion.

Now, when a spinning motion is initiated, the endolymph lags behind at first, and then continues to move at the same rate of motion. As soon as you stop, however, due to inertia, the fluid keeps on moving for a while. For that period of time, the nerve cells send messages to the brain that the brain is still spinning, which makes you dizzy. Eventually, this endolymph slows down and we return to normal.

If this is such a natural phenomenon, what’s so special about figure skaters and ballerinas?

Ballerinas and skaters have awed us with their unnatural moves on stages and arenas around the world. They are able to perform breathtaking spins without showing even slight signs of dizziness. To top that off, they go on performing move after move without seeming to experience any effect. Even looking at them perform makes me dizzy, so how do they do it?

Most of us would blame it on black magic (if we were still in the 18th century), but there is a much more scientific explanation.

Well, not really a scientific explanation, so much as a good trick that we have mastered. Try to remember real hard where you orient your hands while spinning on that merry-go-round. Yes, they probably swing everywhere.

In the case of dancers, the trick is simple. They keep their eyes fixed on one point, followed by whipping their heads around rapidly when their necks cannot turn anymore. How does this help? Simple. While the rest of the body keeps spinning, their eyes trick their bodies into thinking that they are standing still.

The spins performed by ice skaters are much faster than those of dancers, so it is impossible for them to perform this trick. They will instead stare at a fixed point at the end of each spin move, but they typically don’t whip their heads around continually, as this could cause injury to their necks due to the high rotational speeds they are able to achieve. The trick ice skaters use isn’t really that eye-popping. It’s simply a question of keeping the eyes horizontal, so the view only spins around one axis, and gradually training oneself to overcome the dizziness over the course of extensive practice. The main trick is just long hours of practice, but figure skaters simply have to get used to it. They certainly feel dizzy, but in order to overcome that, many figure skaters will incorporate a dance move at the end of a long spin that is designed to provide a breather while the momentary dizziness passes.

With all this being said, don’t start blaming the vestibular system for your dizziness after a heavy night of drinking. That’s probably just your own fault.