Pink snow or watermelon snow is caused by an algae that contains a red pigment called astaxanthin.

Imagine this. You’re in the Swiss Alps. It’s the beginning of spring and the snow is starting to melt. You venture outside to take pictures of the pristine, white snowy mountains, but once you arrive, you see that the snow is pink!

Sounds like a dream, doesn’t it? Well, don’t be too shocked if this ever happens to you. Pink snow, commonly called “watermelon snow,” is a natural phenomenon. People have seen this in the U.S., Australia, New Zealand and many more places, but what exactly is going on here? What Gives The Snow Its Unusual Color?

Is it a form of refraction? A certain chemical in the soil? Perhaps a marketing gimmick to attract tourists?

I suppose the last thing you would imagine is microscopic plants, but that is precisely the answer. The pink color is from a species of algae, Chlamydomonas nivalis. Chlamydomonas is a genus of algae that looks almost alien-like, with two long whip-like flagella that help it move (picture below). A picture of a single Chlamydomonas cell. Notice how it is green; this color comes from chlorophyll (Photo Credit : Achiichiii/Shutterstock)

Why Pink And Not Green?

Snow isn’t the only thing that these algae color pink. Prawns from aquaculture farms have a slight pink tint, whereas prawns fished from the ocean have white flesh. Any guess why the flesh is pinkish on farms? Because of astaxanthin! On farms where they harvest prawns, they feed them astaxanthin as a supplement, turning their well-fed prawns a pinkish hue.

The pinkish color in prawns is caused by astaxanthin, whereas prawns have naturally white flesh (Photo Credit : Kritchai7752 & ManaswiPatil/Shutterstock)

Why Is The Snow Turning Pink Only Now?

Now, you may have noticed something I said at the beginning of this article—the pink snow was found in melting snow. That’s because this alga survives in very niche conditions. If the temperatures are too low, it will not survive. If the temperature is too high, the snow becomes too sludgy.

C. nivalis can only survive in temperatures between 0-1°C. This means that the snow must be wet, but not completely melted. When the snow is frozen over, the alga goes into a dormant stage. When the temperatures are favorable again, it gets ready to grow once more. Over and above that, the amount of UV radiation at high altitudes is also high. To help survive this radiation, the algae grows deeper in the snow, so once snow melts, the pink deposits are visible.

C. nivalis undergoes a lot of stress, but still finds a way to survive. They not only survive, but also perform photosynthesis! Normally, at this temperature, plants undergo photoinhibition, but C. nivalis is still able to photosynthesize. How is that possible? Well, while it is not fully understood, it was found that algae growing deeper in the snow were the ones that performed photosynthesis.

Has C. nivalis found ways to survive these harsh conditions that no other species has figured out? Absolutely not! There are other species that give us other colors of snow!

Let’s start with the color you would typically expect from plants—green. This is usually caused by two genera of algae Chloromonas and Chlamydomonas. As with other plants, the color comes from chlorophyll.

Watermelon snow is not only found as pink snow, but can also be found in colors like dark yellow, orange and crimson. These colors are due to a group of enzymes called carotenoids. Astaxanthin is only one of the carotenoids. These carotenoids accumulate later in the life cycle of algae. In fact, the snow initially starts off as white snow and eventually turns pink.

There is even grey snow! This is far rarer and can only be found in glaciers. Such instances are very hard to recognize in the field and cannot be seen without a microscope.

Also Read: Why Are Plants Red In Color At The Bottom Of The Ocean?

Watermelon snow is a very interesting phenomenon. An even more interesting fact, however, is that when disturbed, it produces a watermelon smell! That said, I would not recommend eating it.

Algae in our snow is not always a good sign. You can read about how it can be a sign of climate change in our article here. We can use this snow to help us predict climate change trends and help us plan our future in more sustainable and healthy ways. 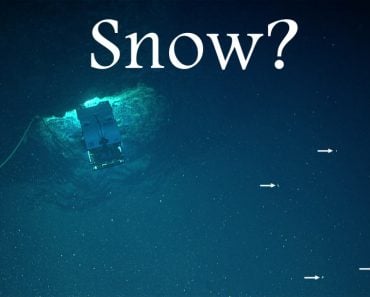 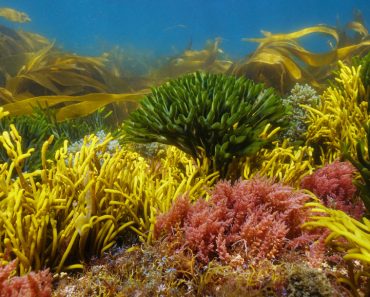