Ambergris is essentially a mass of undigested squid covered by a waxy chemical that the whale secretes. This ejected waste product from the whale develops a pleasant fragrance over time as it floats around in the ocean.

When you think of buying perfume, I’m pretty sure whale vomit isn’t the first thing that pops into your mind. However, the perfumers of the world beg to differ. As it turns out, ambergris (whale vomit) is one of the most exotic and expensive fragrances available. Ambergris is worth as much as gold, and at different points in history, it was actually worth three times as much!

Ambergris has been used for its aroma for centuries. In ancient Egypt, ambergris was used as incense. The Chinese called ambergris the “dragon’s spittle fragrance”. During the Black Death in Europe, people believed that carrying ambergris would prevent them from catching the plague. Some cultures considered it an aphrodisiac, while others used it to treat headaches, colds, epilepsy and other diseases.

But what makes whale vomit smell so great? And why does it cost so much?

Ambergris is a waxy solid substance formed by the secretion of the bile duct in the intestine of a sperm whale. Even though ambergris is regarded as “whale vomit”, it isn’t technically “vomit”, and here’s why.

Like a cow, the sperm whale is a ruminating mammal, so it has four stomachs. The whale typically feeds on squids, cuttlefish and other sea creatures. The food passes from one stomach to another while being digested, but the sharp squid beaks and other undigested waste forms a dense mass that irritates the whale’s stomach lining. The sperm whale sometimes vomits this undigested mass out into the ocean. This slurry spewed by the whale is NOT ambergris.

Some of the undigested squid beaks enter the intestinal tract of the sperm whale. In the gut, the whale’s body produces a waxy substance that wraps around the prickly mass of beaks in order to protect the intestinal lining.

This waxy substance is a mixture of ambrein—digestive juices from the bile duct—and feces. As the mass keeps growing, it moves further along the intestinal tract, where it starts obstructing the rectum. It acts like a dam, causing the feces to pile up behind it. At times, the whale can excrete the ambergris, but in some cases, the mass is so big that the whale cannot push it out. It keeps on building up until it is released when the rectum tears open, causing the whale to die.

In other words, ambergris is either a consequence of a massive poop or through the death of the whale caused by the buildup of a huge poop. 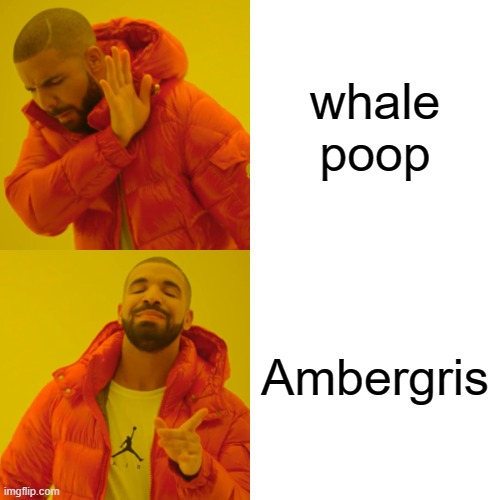 How does whale poop turn into an aromatic rock?

The freshly defecated ambergris is a black, waxy solid and naturally has a strong fecal odor. It is slightly less dense than the seawater, so it slowly rises above and floats on the water surface for years until it lands on some seashore.

Like a good wine, ambergris has to age well before turning into a poop rock with a lovely smell. While drifting in the sea, the fresh ambergris is baked under the sun, oxidized by the salty water and eroded by the wild tidal waves. Only after undergoing years of chemical hardships does the black whale poop turn into grey, fragrant ambergris. 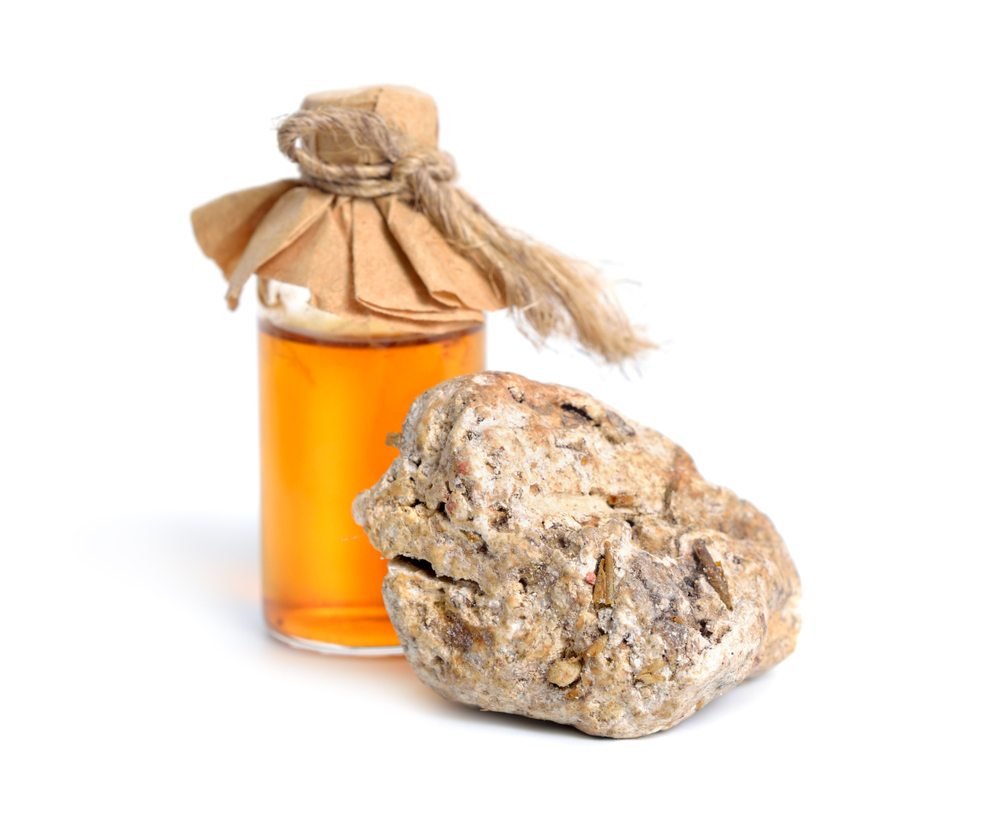 Chemically, ambergris contains acids, alkaloids and a cholesterol-like compound called ambrein. Ambrein is a crystal of a terpene and consists of ambroxan (ambroxide) and ambrinol. They are the reason behind the sweet odor of ambergris.

How does ambergris smell?

For centuries, people have struggled to give a unanimous answer to the question. Behind every aroma, there are many complex chemicals at play. Jasmine oil and ambergris have the same amount of chemical components behind their smell, but it is difficult to equate the fragrance of ambergris with any other scent, as there is no point of reference for the odor. There is nothing else that smells like ambergris, which makes ambergris a novelty.

To make things even more complex, the presence of adulterants complements the aroma of ambergris. Some ambergris has a slight undertone of tobacco, seawater, feces, vanilla, hay or damp earth. 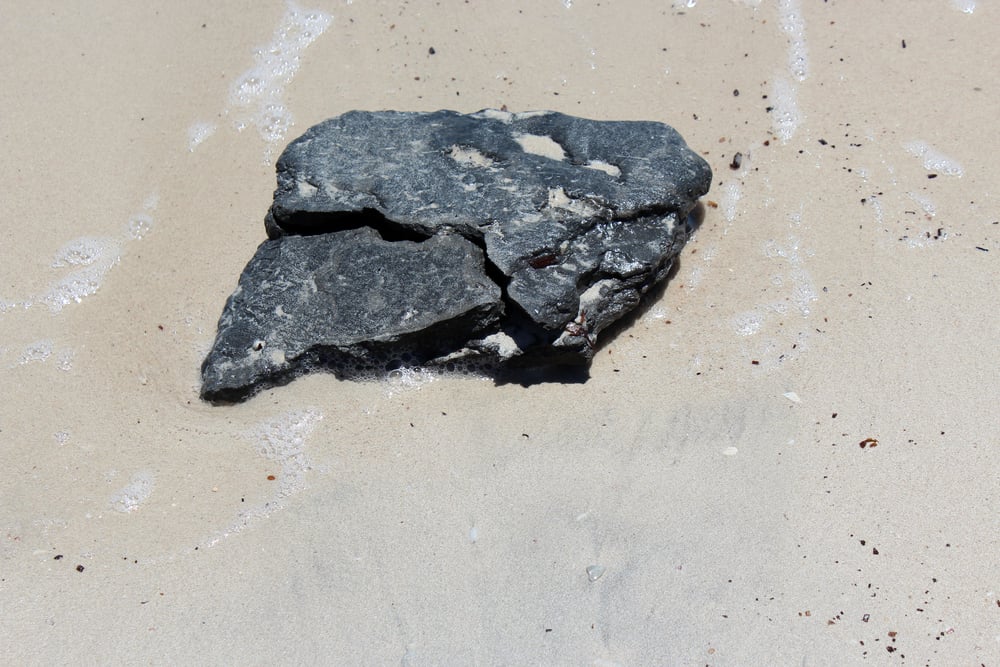 Fresh black ambergris has an animalistic, pungent fecal smell. This is low-grade ambergris that has not matured in the sea for a long enough time and contains less ambrein. The standard ambergris is grey-white in appearance and has aged well in the sea. It has a rich, earthy and salty aroma. 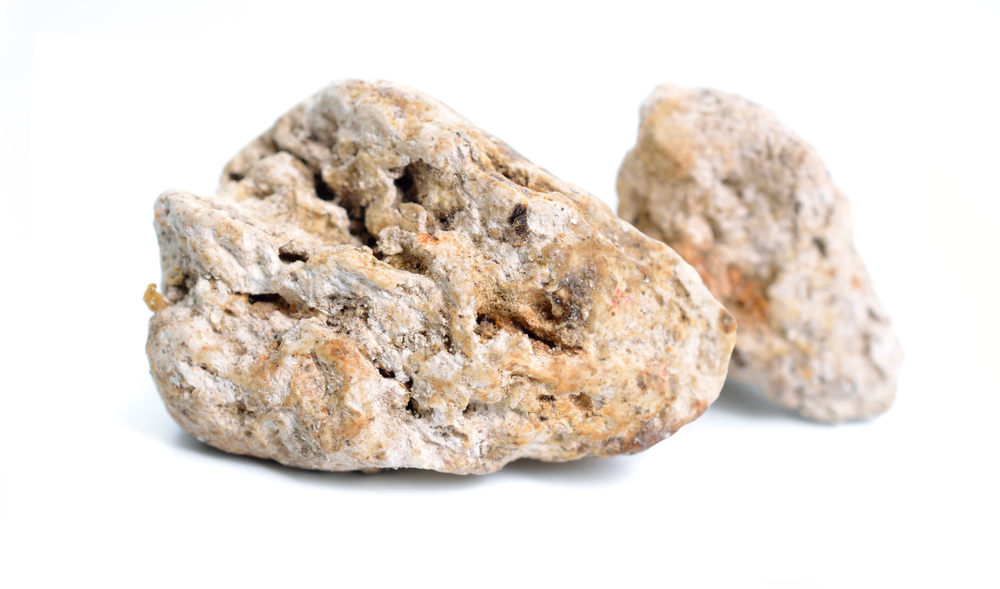 White ambergris has the most refined fragrance of all. A tincture made from it has a sweet and bright scent. White ambergris acts as a fixative and to magnify other notes in the perfume.

Use of ambergris in perfumes

Perfumers use ambergris whenever they can, as it is a good fixative and has a distinctive odor. Ambergris has a strong fixative quality, which allows the fragrance to last longer when applied.

Fun Fact: Queen Elizabeth I used to apply ambergris to her gloves. She did this not only for its exquisite fragrance, but also because of its longevity. Once applied, it would last for years, even after many washes.

Ambergris also acts as a primary note in perfumes. There are many takers of this unique and complex scent in the cosmetic and perfume industry. The scent profile depends on the grade of ambergris used. its indescribable aroma makes it the most sought-after luxury perfume.

Only one in a hundred sperm whales around the world can produce ambergris. Thus, hunting a sperm whale in the hopes of finding ambergris seems quite stupid. CITES (the Convention on International Trade in Endangered Species of Wild Fauna and Flora) agrees that ambergris is a “found” material, similar to biological waste like feces and urine. Therefore, it is legal to buy and sell ambergris only if it is found on seashores.

So, the next time you decide to take a walk by the beach, keep an eye out for a weird-smelling rock. If you’re lucky, you might come across a million-dollar poop rock! 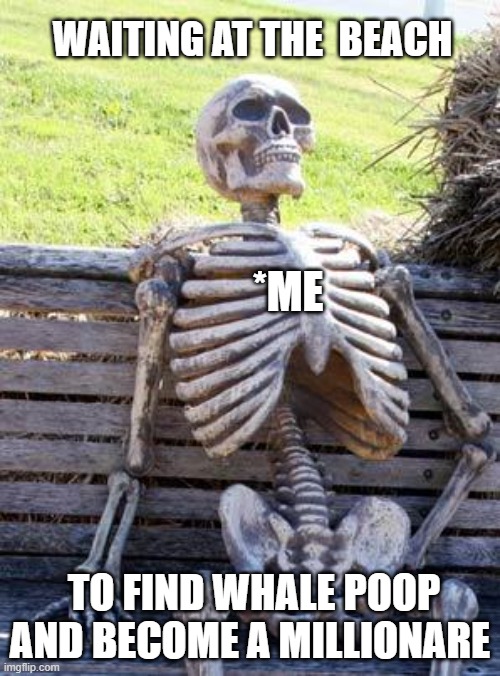