Some experts believe that this behavior stems from the childhood habit of thumb-sucking or putting fingers in the mouth; these infantile actions are self-calming techniques, akin to a pacifier…

You’re watching the last twenty minutes of a gripping slasher flick, balled up in the corner of the couch, with a bowl of popcorn beside you, but that isn’t your snack of choice at the moment. No, your hand is held up to your face, and your fingernails have found their way between your teeth. As the tension in the film mounts, your teeth move into overdrive, delicately sawing and biting through unruly edges and hangnails. It seems to be the only thing keeping you from leaping out of your skin.

For those readers who don’t have any history of biting their nails, the scenario above may sound laughable, but it is anything but a joke for hundreds of millions of people around the world. Nail-biting is seen across continents and cultures, and while it is present in many different degrees and ages, it remains one of the more universally “human” habits. 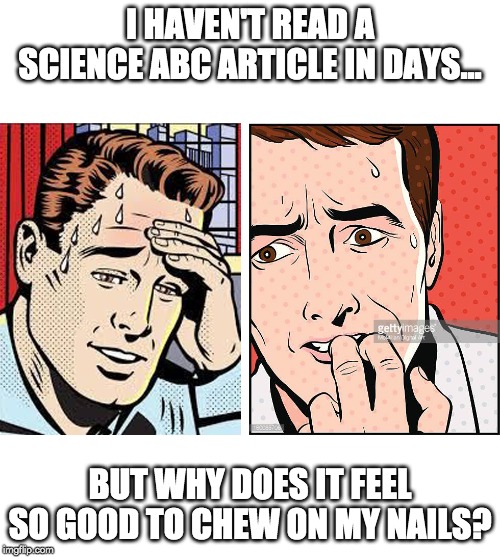 Unfortunately, nail biting isn’t only seen in people during horror movies, and it has been regularly linked to a number of psychological disorders and other health conditions. If you have chewed-up cuticles and pent-up stress, you probably want to understand where the habit comes from, and what you can do to solve it. Look no further.

Before we delve into why we bite our nails, why it’s dangerous, and how to stop, it’s important to understand more about the action itself. First of all, the formal name for biting our nails is Onychophagia. While many people dismiss this behavior as a nervous tic or a bad habit, it is more formally classified as a “body-focused repetitive behavior”, sometimes referred to as “pathological grooming”. 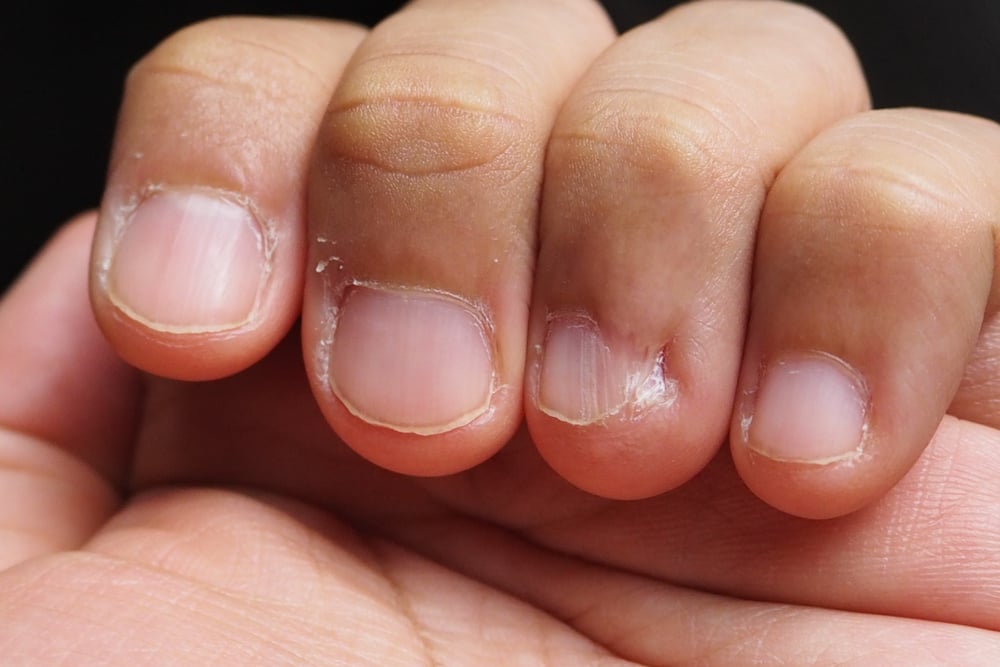 Similar to hair-pulling or skin-picking, this sort of repetitive behavior can be an acute symptom of a particularly stressful event or time period, but in many cases, it is a long-term or chronic problem, persisting through adolescence and into adulthood. While it appears most often in childhood, it is not uncommon for it to develop or manifest later in life, or sporadically over the course of your life.

There are the rather obvious signs and symptoms of nail biting, but the health risks go beyond that, some of which we will cover later in this article.

Why Do We Bite Our Nails?

There are a number of competing and complementary theories to explain the widespread habit of nail biting around the world. Every individual’s case will vary, however, depending on the severity of the habit and the events that trigger the behavior, among others. Determining whether it’s a normal habit or a compulsive behavior can be difficult.

Some experts believe that this behavior stems from the childhood habit of thumb-sucking or putting fingers in the mouth; these infantile actions are self-calming techniques, akin to a pacifier, so it makes sense that placing our fingers in our mouth in some form could be an imprinted self-calming method for many people. The fact that non-chronic nail biting often accompanies periods of stress, whether we are racing to meet a deadline or watching a scary movie, makes this a logical explanation for the action in some cases. 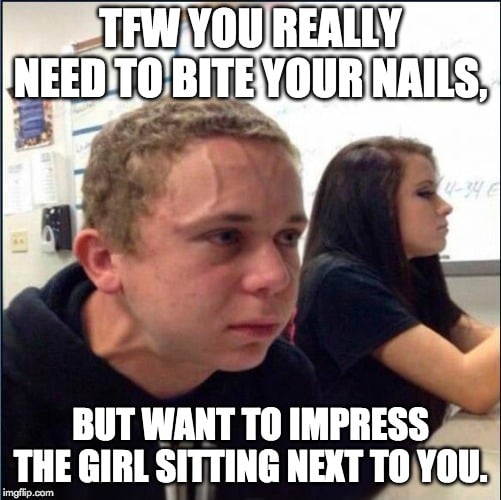 This “pathological grooming” starts from normal behavior, since animals commonly display grooming behaviors, often triggered by something being “off” in their appearance. For example, if your hair begins to show split ends, you may pull out the stray hair here or there. If a hangnail starts to catch on your clothing, you’ll probably bite or pull it off. These normal grooming rituals are normally triggered by a “need”, but in the case of nail biting, other situations can begin to trigger this behavior, such as driving, reading, watching television, high-stress situations, boredom, just to name a few! What may start as self-soothing, or just a bad habit, can grow into a constant or obsessive compulsion.

Finally, onychophagia may have some genetic origins, as studies have shown that body-focused repetitive behaviors are seen more frequently in those with a family history of them, as well as some history of anxiety or stress disorders.

Danger of Biting Your Nails

While biting your nails may not initially seem very harmful, particularly if it is an effective and short-term solution for a stressful situation, there are some long-term consequences of this repetitive habit.

Think about how often you touch foreign objects with your hands in a given day. Many of those germs and microbes can be scrubbed off, but the space underneath your fingernails provides an ideal place for bacteria or fungi to grow. When you stick those nails in your mouth, you are inviting some of those same substances into your mouth. Additionally, when you bite your nails, you are exposing fresh and unprotected tissue to the outer environment, making them vulnerable to other substances or pathogens that can cause infections. 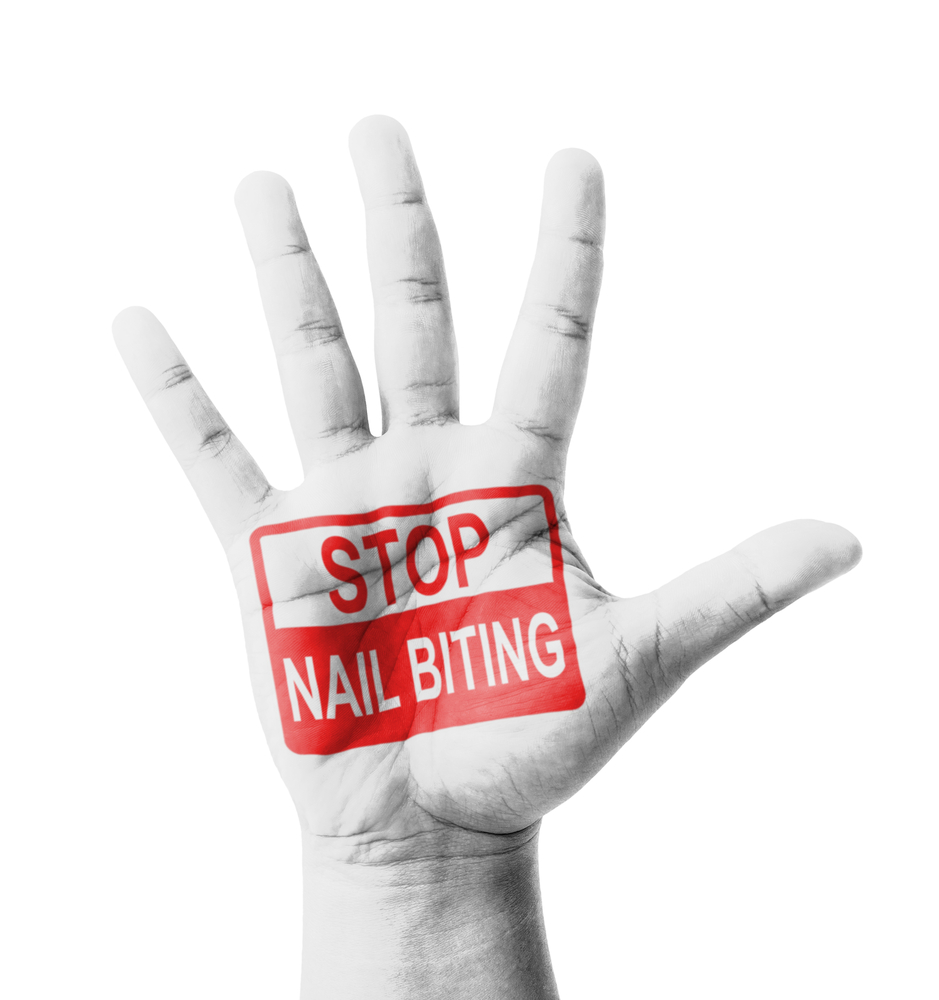 In terms of the effect that nail biting can have on your teeth, you shouldn’t be surprised if your teeth gradually shift out of place, or start to show small chips or sections of damage, if you are a regular nail biter. Your nails are made of a hard material called keratin, a very tough protein, the same one found in the hair and skin. When your tooth enamel faces off against this durable keratin, it can cause permanent damage to the appearance and integrity of your teeth.

Finally, if you are chewing your nails to keep them looking perfect and even, i.e., removing hangnails as soon as they appear, you may actually be stimulating the development of even more hangnails and ingrown nails in those uneven spaces. This is because the nails won’t necessarily grow evenly if they are bitten unevenly.

There are many things that we do out of habit, even every single day, without giving them much of a second thought. However, when it comes to repetitively and obsessively chewing on your nails —and likely disposing of them inappropriately!—it could be a sign of a deeper problem. Therefore, it is important to educate yourself on why so many people struggle with onychophagia, and be able to identify when this behavior crosses into an unhealthy realm. In the meantime, keep your mind and hands busy with something else… no one wants to see you nervously chomping on your thumbs!