Yes, brain size does matter when it comes to intelligence. Human beings have the largest brains of any primates, and when the size of the brain is taken into account, human beings have the highest level of intelligence of any species. However, there are many other factors that affect intelligence, such as emotional quotient, educational availability, genetic factors, cultural norms related to education, socioeconomic levels, and the size and activity levels of different parts of the brain.

Human beings have an annoying desire to be superior. We see this in the cities we build, our flagrant disregard for the natural world, and our constant geopolitical struggles against other members of our species. Furthermore, when we look at other species, we often see them as beasts, wild animals that should be subjected to our superior intelligence. After all, we are able to construct cultures, write music, communicate in hundreds of different languages, and accomplish incredible technological feats that most of us don’t even understand! 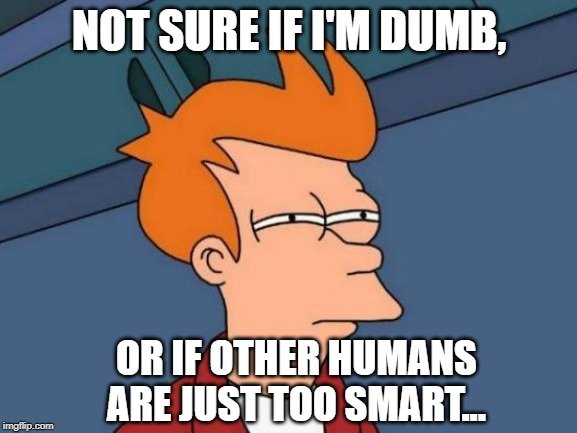 We often cite our “big brains” as the cause of our global dominance, leading to the somewhat fallacy-filled assumption that a bigger brain means greater intelligence. On the surface, this statement sounds and looks good, in line with many of our natural assumptions about anatomy, but as it turns out, there are far more variables and nuances to this ongoing debate over brain size. Before you proudly claim cognitive superiority over any other species because of your big human brain, there are a few things you should know….

When we are taught about human anatomy in school, we are often told that humans have the largest brains of primates, which is a simple explanation for our advanced cognitive abilities. The physical aspect of that fact is true; primates already have larger brains than most other mammals, but humans have even larger brains than other primates!

For reference, the average human brain is roughly three pounds, and represents about 2% of our total body weight. In terms of those animals with significantly larger brains than ours, such as sperm whales (~18 pounds) and elephants (~11 pounds), some might assume that they would be “more” intelligent, yet their brain-to-body mass ratio is sometimes as small as 0.1% (as compared to 2% for humans). Mice, on the other hand, have a similar brain-to-body mass ratio as humans, while in other animals, such as certain voles and birds, that ratio could be as high as 10%! In other words, humans neither have the largest brains, nor the largest brain-to-body mass ratio. Claiming cognitive superiority based on these two metrics is therefore impossible for humans… and we don’t like to lose. 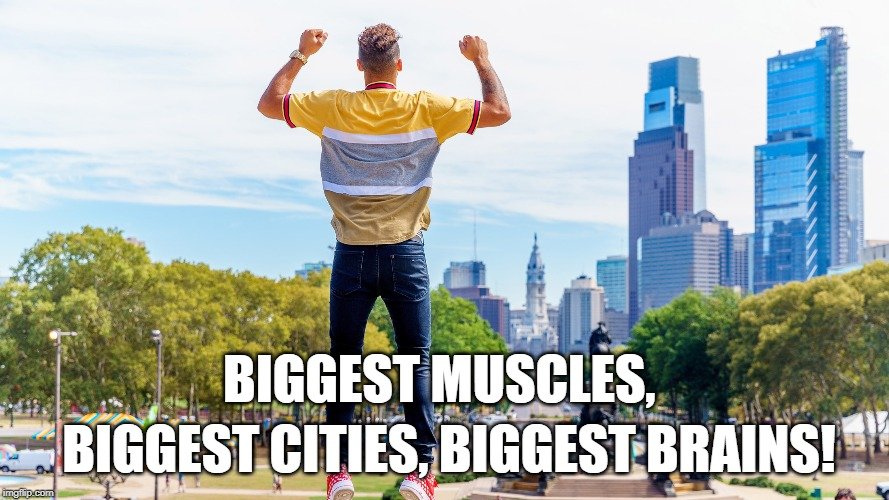 Another metric was therefore developed, known as the Encephalization Quotient (EQ); it is quite similar to the brain-to-body mass ratio, except it considers certain allometric and scale factors, which link size, body shape, function, behavior and anatomy. A large of reference species were used to establish a baseline for expected brain size, factoring in how much of the body’s weight (and brain) is made of lean muscle versus pure mass. A good illustration of this is aquatic mammals, such as whales or dolphins, whose brains may have more fatty glial cells that act as insulation in their cold environments to ensure that the other parts of the brain function properly. These nuances can’t be accounted for in a pure brain-to-body mass ratio, but the Encephalization Quotient considers more of these factors, leading to a more accurate inter-species comparison of relative “intelligence”.

When it comes to the EQ for humans, we have a brain that is about 6-7 times larger than expected for other mammals with a similar body size. In comparison, an elephant’s brain is only about 1.4 times larger than expected for an animal of a similar size. In fact, when using this metric, human beings do have the highest level of intelligence of any species, but as we will see in the following section, there are many other considerations that are ignored when using this method.

While it is possible to measure the intelligence of certain animals with more complex tests, such as problem-solving activities, play opportunities, and social/behavioral analysis, most human-animal intelligence comparisons are based on the simpler metrics explained above. 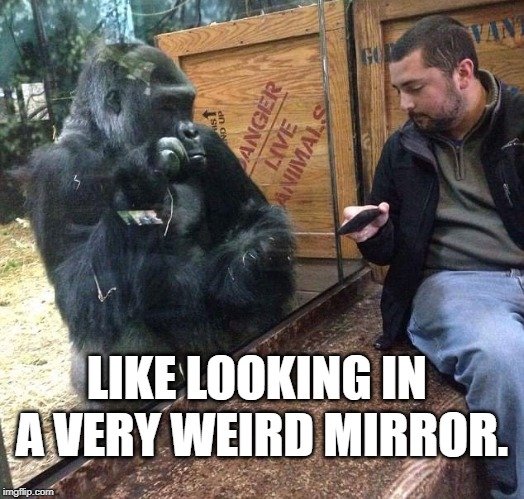 For a comparison between two different human brains, a more diverse and measurable range of variables is present. Most people are aware of the Intelligence Quotient (IQ), which has been a commonly used metric for intelligence for more than a century. Basically, this is a test that measures your capacity to learn, and analyzes a number of general areas, such as spatial reasoning, analytical thinking and short-term memory. This was largely trusted as a valid measurement tool for decades, but in recent years, its reliability has been questioned, as it doesn’t take into account the environmental and cultural factors that may affect some people. In simple terms, it fails to consider educational availability, genetic factors, cultural norms related to education, socioeconomic levels.

Emotional Intelligence is often seen as a complementary measurement to IQ. A person’s emotional quotient (EQ, not to be confused with the Encephalization Quotient) is intended to measure one’s ability to identify, process, analyze, respond, express and control their emotions. Unlike one’s IQ, a person can work on their EQ and improve it over time, as they mature and experience more of the world.

Now, regardless of which of these two intelligent measurements you want to use, when attempts to establish IQ/EQ correlations with brain size are made, it is found to have a weak correlation, affecting about 10-15% of the intelligence level. So, while a larger brain may boost intelligence slightly, it is not a definitive connection.

In recent decades, as technology has improved, including the use of MRI (magnetic resonance imaging), it has been possible to analyze the size and activity levels in certain parts of the brain. In particular, the areas directly related to cognition, such as the frontal, parietal and temporal parts of the neocortex, can be analyzed. Increased thickness and activity levels in these areas similarly have a weak correlation with higher intelligence measurements. 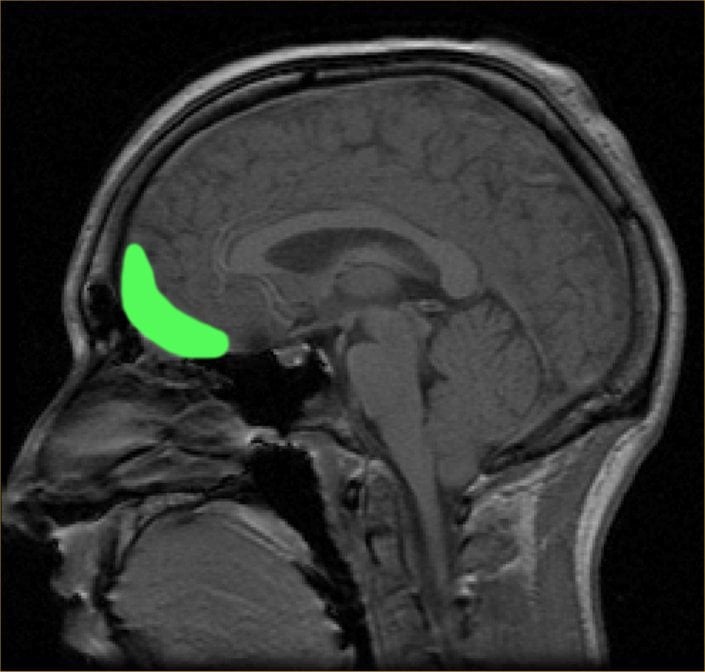 A deeper explanation must be present, and ongoing research is beginning to reveal the answers. The strongest argument for an intelligence explanation is the connectivity of our brain. The ability of different areas of our brain to communicate with each other rapidly and effectively is believed to underpin our intelligence. Now, this particular facet of the brain is partially linked to brain size, i.e., a larger brain would offer more surface area and infolding, thus leading to more neuronal connections and greater intelligence. However, in direct contrast to that rudimentary correlation is the fact that only some parts of the brain are integral to cognitive function.

Fluid intelligence is different than general intelligence, but more challenging to measure. It relates to how the brain functions in novel or changing situations, pattern-matching and logical reasoning within fields and subjects without prior knowledge or expertise. This fluid intelligence appears to be much stronger in those with high levels of neuronal connections, which can be likened to a neural “fingerprint”.

The volume of “grey matter” in our brains, as well as the frontal lobe volume, appears to be more correlated with intelligence, since this is where most of the synapse and neuron density is found in the brain. These densities may be the best means that we have to measure our cognitive capacity; more neurons and synapses mean faster and more efficient processing of information, as well as more connections between disparate brain areas, improving logic and reasoning. 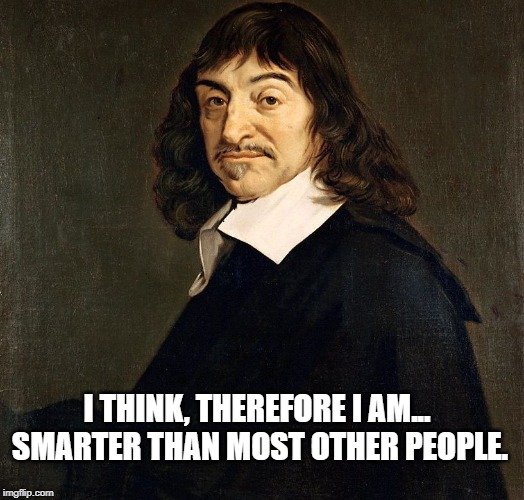 With that in mind, even though some of our early human ancestors, such as Neanderthals, had larger brains that modern-day humans, the complexity of their neuronal connections was likely more primitive, making them less intelligent than their smaller-brained cousin species that eventually overtook them in the evolutionary race towards today.

The subject of brain size and its relation to intelligence can be a delicate one, particularly given the charged and controversial history of xenophobia and racism inherent in assessments of cognitive ability. What researchers have found, however, is that brain size alone does not dictate intelligence. There are environmental, cultural, educational and genetic factors, many of which are difficult, if not impossible to quantify. The best guess from researchers and specialists is that a larger brain size may provide a foundational advantage for acquiring intelligence, based purely on capacity, but the actual development of intelligence depends on the efficiency with which different areas of the brain communicate and interact, a trait that can be managed and affected by our individual choices and experiences. 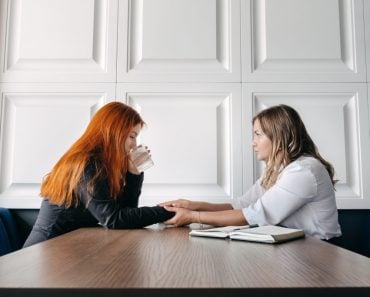