The mysterious composition of the invincible Maya Blue could hold the key to unlocking the world of fade-proof dyes.

How many times have you looked at your favorite blue jeans and made a wish for them to never fade? Unfortunately, blue is a particularly difficult dye when it comes to longevity.

However, deep in the green jungles at the heart of the Americas is a secret—one hidden from the rest of the world for hundreds of years.

We shall embark on a journey where we untangle the enigma called Maya Blue—a dye that is immune to the passage of time.

This story not only includes the fascinating chemistry behind an indestructible dye, but also the significance of the color blue, and the adventures of one man who once owned a wonder of the world!

Edward Thompson And The Discovery Of Maya Blue

The moment we hear “Mayans”, some may think of calendars or apocalyptic prophecies, but additionally, they were the creators of the first recorded hybrid organic-inorganic dye. They were probably even pioneers in nanochemistry!

The Mayans were an advanced indigenous agricultural community, residing in an area that roughly stretched from central Mexico to Honduras. This part of the world was completely hidden from the rest of the globe.

Unfortunately, most Mayan literature was destroyed during the Spanish invasion of the region. Some works were rediscovered by John Stephen Lloyd and Fredrick Catherwood during their deep forest exploration of the Meso-American region in 1839. Click here to read more.

Their detailed descriptions and illustrations of the region inspired many archaeologists and explorers. One of these was Edward Herbert Thompson. In the late 1890s, he acquired some land in the Yucatán region for $500 and began his expedition.

One such day of exploration began as a snail-paced journey on a horseback with a local guide, on a hot dusty day. The sun was long gone, but Thompson and his company kept moving deeper into the forest.

They were sleepy and tired, but what they saw next swept sleep far from their minds. Stood before them, bathed in the majestic glory of a silvery full moon, was El Castillo of Chichén Itzá (one of the new Wonders of the World). 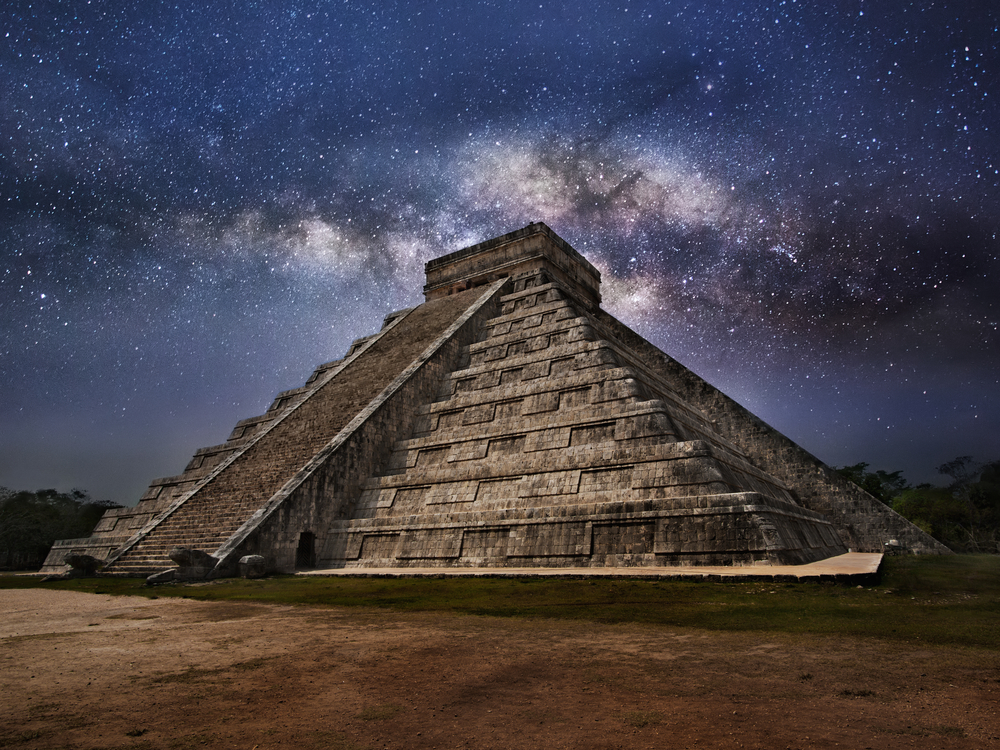 Thompson and his family settled down in a plantation near the exploration site, along with their workforce, which consisted of local Maya people. Thompson would regularly climb Chichén Itzá to have a good look at the nearby area. On one such occasion in March 1904, he felt like a nearby Cenote (a sacred well) “beckoned to him”.

Without further delay, he began dredging the cenote with the help of local Maya people. He also hired a Greek diver to help him investigate the bottom of the well. The dredging and diving helped him recover jewelry, figurines, and broken pottery. 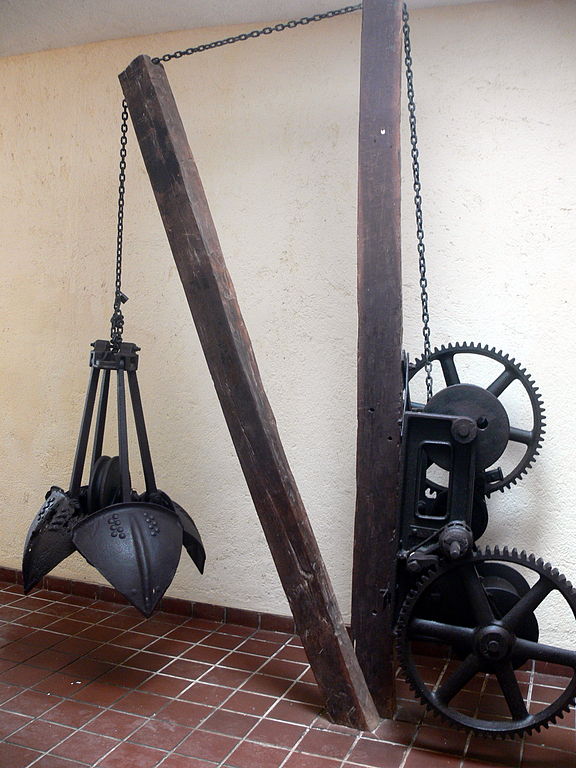 The crane used by Edward Thompson for excavations at the Sacred Cenote of Chichén Itzá (Photo Credit : Wolfgang Sauber/Wikimedia Commons

However, the most bizarre things discovered during the dredging were the pile of skeletons and a 14-foot layer of mysterious blue sediment.

The objects dredged out of the cenote were sent to Harvard’s Peabody Museum, the Field Museum of Natural history, and many other research institutions. The investigation into the dredged objects and ruins of the Mayan civilization resurfaced many facts that had been buried deep in time.

In 1931, H.E Merwin, a material scientist, examined the blue paint on a wall painting at the Temple of Warriors in Yucatan. He became the first person to identify the strikingly resilient properties of this newfound blue paint. Later, in 1942 an American chemist named Rutherford J. Gettens coined the term “Maya Blue”. This marked the beginning of the investigation into the highly stable blue dye. 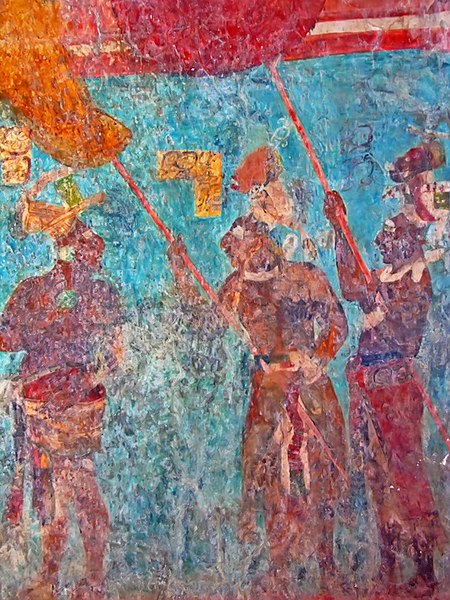 The Dark Past Of Maya Blue

Studies have revealed that Maya Blue first appeared in 800 AD. It is believed to have been a part of the Mayan cultural construct.

The Mayans were highly dependent on agriculture and performed many rituals to please their rain god, Chahk. 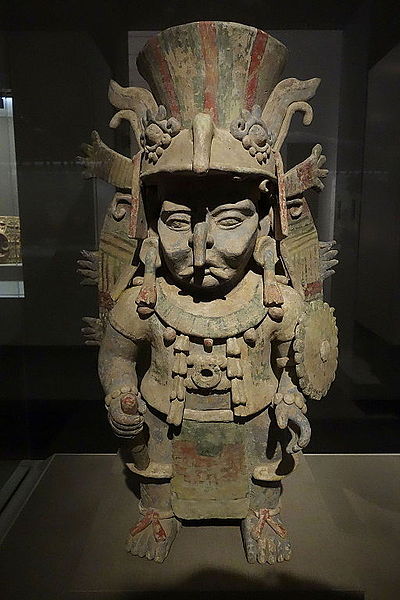 One such custom was presenting the god with jewelry, ceramics, and sometimes even humans as offerings. It is believed that the dye was prepared as a part of the ritual, and the offerings were painted blue before they were tossed into the sacred cenote. This could explain the presence of blue sediment at the bottom of the well. They took feeling “blue” to a whole new level.

Also Read: How Did A Shade Of Purple Charge The World?

A similar ritual was also mentioned by Bishop Fray Diego de Landa in one of his personal accounts (the man who ordered the burning of Mayan codices).

How Was Maya Blue Made?

A three-foot pottery bowl that now resides in the Field Museum helped scientists get closer to the answer. The pot had copal incense (a plant resin) with splashes of a white and blue pigment. When studied under the scanning electron microscope, it revealed signatures of indigo (a plant-based blue dye) and palygorskite (a type of magnesium-aluminum clay).

The same findings were confirmed by Antonio Domenech and his team at the University of Valencia when they performed spectroscopic analysis and voltammetry on blue paints found on different wall murals in Yucatan ruins.

Scientists believe that the Mayans extracted indigo from the anil plant, mixed it with palygorskite clay, and heated it slowly using copal incense. Copal, being a sticky plant resin, would have also contributed to binding.

Maya Blue is more on the turquoise side, which meant there was a yellow component to it. The forgotten half of Maya Blue is the compound dehydroindigo. This is an oxidized form of indigo whose ratio determined whether the resultant shade would be turquoise or dark greenish-blue.

What’s So Interesting About Maya Blue?

The pigment, despite being hundreds of years old, has shown zero to negligible signs of fading. It is resistant to not only environmental and biological factors, but also to chemical treatment. It shows no signs of degradation when exposed to boiling nitric acid, strong solvents, and bases. It has shown stability even at very high temperatures (up to 250⁰C).

Apart from its extraordinary properties, there is one more reason why the blue pigment has piqued the curiosity of historians and scientists.

Blue is an omnipresent color. It has given us great things like the musical genre (blues), blueprint, blue jeans, feeling blue, and countless other anecdotal uses.

However, if you look at the natural world, the pigment blue is quite rare. It’s so rare that most ancient languages didn’t even have a word for the color blue. 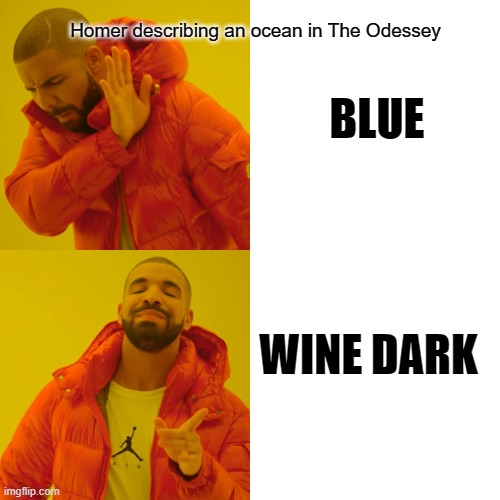 But what about the sky, the ocean, or the wings of your favorite butterfly? Most of us know that the sky and ocean appear to be blue due to the scattering properties of light. To learn more, click here.

The wings of birds or butterflies have microstructures made of keratin. These structures are arranged in such a way that they reflect the light at a particular angle, which makes them appear blue. Thus, most of the blue we see in nature is a form of structural color and not from a blue pigment. To learn more about this, click here.

The pigment blue is a relatively new invention in the timeline of human history. The Egyptians are considered to be the first to synthesize an artificial inorganic blue using sand, copper, and lime, but we lost the recipe for Egyptian Blue to history.

Then someone discovered Lapiz Lazuli—a semi-precious naturally occurring mineral found in the Kokcha River Valley in Afganistan. This mineral was ground to obtain a bright blue pigment called Ultramarine. The blue became a highly sought after pigment and became linked to divinity and royalty. Its rarity skyrocketed the price, making it more expensive than gold.

What Makes Maya Blue So Stable?

Indigo as a dye isn’t very stable and degrades easily when exposed to light and other elements of nature. When heated with palygorskite and copal, it can give rise to a guest-host system that stabilizes the pigment.

The clay, palygorskite has a layered framework that gives rise to a tetrahedral network. The network comprises tunnel-like structures that are home to water molecules, and can trap molecules when empty. Upon heating slowly, the trapped water molecules leave the clay, making way for the indigo molecules to enter the channel. 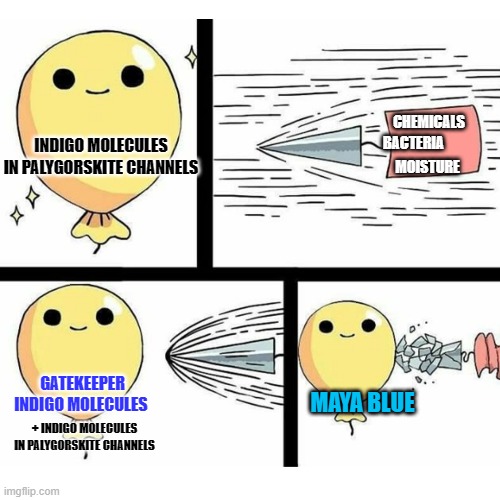 The jury is still out on the actual molecular bonding and definitive composition of the dye components. Even so, more than half a decade of studying the nanostructural aspects of the dye has inspired scientists to design archeomimetic (mimicking the pre-historic times) dyes that are fade-proof!

Scientists are trying to synthesize hybrid inorganic-organic nanocomposite pigments similar to Maya Blue. These pigments would be able to mimic its UV and chemical resistance.

Understanding Maya Blue is like peeping into the past through a looking glass, scrutinizing history in order to help us fabricate materials that are future-proof.

Also Read: Why Is The Color “Blue” Difficult To Find In Nature?

Every year, humanity discards thousands of tons of faded clothes that end up in landfills. Also, most of the dyes we use to color different objects end up draining into the ocean. Their hostile ingredients make it even worse for the environment and the creatures who live there. Fabrication of a fade-proof dye from environmentally benign components could be an answer to this critical issue.

Copal and palygorskite were used by Mayans for the treatment of many ailments. When mixed with indigo, it symbolized the healing power of water. And someday, when we discover how they actually made it, maybe it will even help us heal our planet!