Caffeine essentially blocks the compounds that make you tired, while allowing other energizing compounds and neurotransmitters to affect the body. This is a temporary condition, typically followed by a crash as those “sleep” compounds flood your system.

Caffeine essentially blocks the compounds that make you tired, while allowing other energizing compounds and neurotransmitters to affect the body. This is a temporary condition, typically followed by a crash as those “sleep” compounds flood your system.

How often have you groggily pulled yourself out of bed, eyes barely open, and stumbled into the kitchen for your morning cup of coffee? Some people can’t live without it, or at least can’t function normally, and very often, people say that a cup of coffee is one of the best motivators to get out of bed. For people who have made coffee a huge part of their daily routine, it is critical to understand what magical powers this energizing beverage actually has, how it affects the body, and what risks it could pose.

As most of you know, the active ingredient in coffee that provides that beloved burst of energy is caffeine, but that brings up an obvious and important question: How does caffeine work in the body?

What does caffeine do?

For more than 2,000 years, caffeine has been a part of human culture, and due to its energizing effects, this comes as no surprise. The heightened sense of alertness or cognitive prowess has been highly desired by everyone, from hunters and political leaders to college students and cross-country truckers. The reason that it works so well in the human body for additional energy is because it can interrupt the normal flow of chemicals in your brain.

More specifically, caffeine interrupts the normal adenosine pathway, which is what regulates the feeling of “tiredness” in the body and mind. Essentially, the size and shape of caffeine (actually known as trimethylxanthine) is similar to a different chemical called phosphodiesterase, so when caffeine is introduced to the body, it can block the receptors for this chemical. If phosphodiesterase binds with a cell, it can then break down cyclic adenosine monophosphate (cAMP), which leads to a release of adenosine. Over the course of the day, our bodies pay attention to the level of adenosine that has been produced, and gradually makes us tired or sleepy. 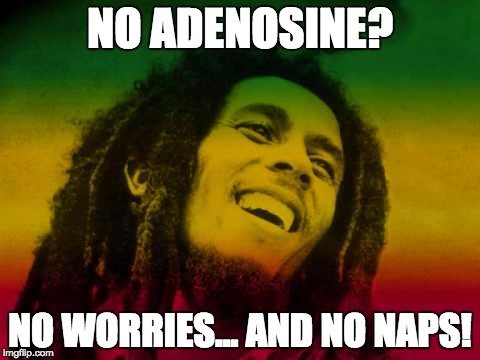 When caffeine blocks the phosphodiesterase receptor, it blocks the release of adenosine, preventing you from becoming sleepy. Simultaneously, caffeine is able to stimulate the release of other neurotransmitters, such as glutamate and dopamine, which can provide a major energy surge in the body.

Most experts do not recommend more than 300 milligrams of caffeine per day, which is basically two cups of average coffee. However, millions of people around the world drink 3, 4 or 5 cups every day – if not more!

This can lead to very high levels of caffeine, long-term blockage of adenosine molecules, and a nasty drop in energy after all of the caffeine has worn off. As soon as the caffeine is processed by your system, all of the adenosine that was being blocked will suddenly flood the body, which is why people “crash” after drinking too much caffeine.

How long does it take for caffeine to kick in?

It takes around 45 – 60 minutes for caffeine to kick in after it is consumed. One of the reasons coffee remains so popular is that the effects of caffeine can often be felt for 4-6 hours. In addition, if people are drinking multiple cups each day, it is feasible to spread out your cups of coffee and be “under the influence” of caffeine for most of the day.

The long processing time of this chemical is also why coffee is often avoided by people after dinner or late at night, particularly if they already have problems falling or staying asleep.

Many people who enjoy the sensation of caffeine in their system, but want milder or shorter effects, often turn to tea, which has roughly 1/3 the amount of caffeine as a cup of coffee. Interestingly enough, tea leaves are actually higher in caffeine content than coffee beans, but the chemical is far more diluted and difficult to extract in tea preparations.

Aside from the exhausted caffeine crash following a long morning of sipping endless cups, there are other dangers to an excessive amount of caffeine. It has many physical and chemical traits that are similar to hard or illicit drugs, including amphetamines, heroin and cocaine, and can have some of the same side effects as well. First and foremost, caffeine is an addictive substance, so if you add large quantities of it to your body every day, if you ever decide to stop, it will not be easy, and will likely cause withdrawal symptoms of some kind (e.g., headache, stomach upset, sleep problems).

With more than 400 billion cups of coffee being consumed every year around the world, people clearly aren’t too worried about becoming addicted. In fact, it appears that most people already are. In America alone, more than 100 million people drink at least 1 cup of coffee every day. Aside from the addictive symptoms, caffeine also increases blood pressure, which can be dangerous for people who already suffer from atherosclerosis, or are at high risk of heart attack or stroke.

Coffee and caffeine can also wreak havoc on your gastrointestinal system, leading to symptoms of irritable bowel syndrome, constipation, diarrhea and general stomach upset from high acidity. Excess caffeine, especially over extended periods of your day, can also cause muscle spasms and jittery feelings in the extremities. It can also cause painful migraine headaches, insomnia, personality changes, mood swings, irritability and a racing heartbeat. 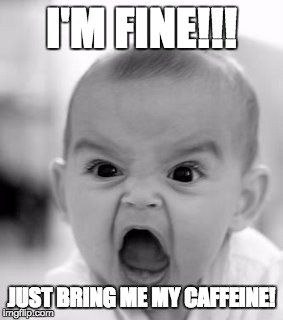 In other words, while coffee may seem like the best beverage ever invented, able to kickstart your morning and clear the sleep from your eyes, it is important to consider what its other effects on the body may be. Some people who consume caffeine in moderation can make it a valuable and harmless part of their lives, but that isn’t the case with everyone.

Now that you know what caffeine can do to the body – both good and bad – perhaps it will help inform your choice next time you walk into a Starbucks for your third Venti caffeine bomb!