Robert Koch was a German scientist born in the 19th century – December 11, 1943. He studied medicine and was also a microbiologist. His experiment confirmed that infections can be spread by the blood of infected individuals. He further went ahead and isolated these creatures and bred pure cultures. In doing so, he discovered the occurrence of spores.

Bacteriology is a field of science that, not surprisingly, deals with the study of bacteria and everything related to them. This involves the genetic structure, morphology, physiology and biochemistry of bacteria, among others. From our anthropocentric perspective, it is a very important field. Remember, bacteria can be both friend and foe. They can cause disease, but they also possess beneficial attributes.

While not the only contender for this spot, Robert Koch is known as the father of bacteriology. He has made some majorly significant contributions to the field and certainly has earned the title.

Robert Koch was a German scientist born in the 19th century – December 11, 1943. He studied medicine and was also a microbiologist. At the age of 5, with the aid of newspapers, he taught himself to read and write, to the astonishment of his parents. During his high school studies, he showed a keen interest in biology.

In the 19th century, although the existence of microorganism had already been discovered, they still hadn’t been fully credited with the ability to cause various diseases. During college, Koch was very influenced by a paper written by his professor, which suggested the idea that it was indeed microorganisms that caused and spread diseases, rather than spontaneous generation. 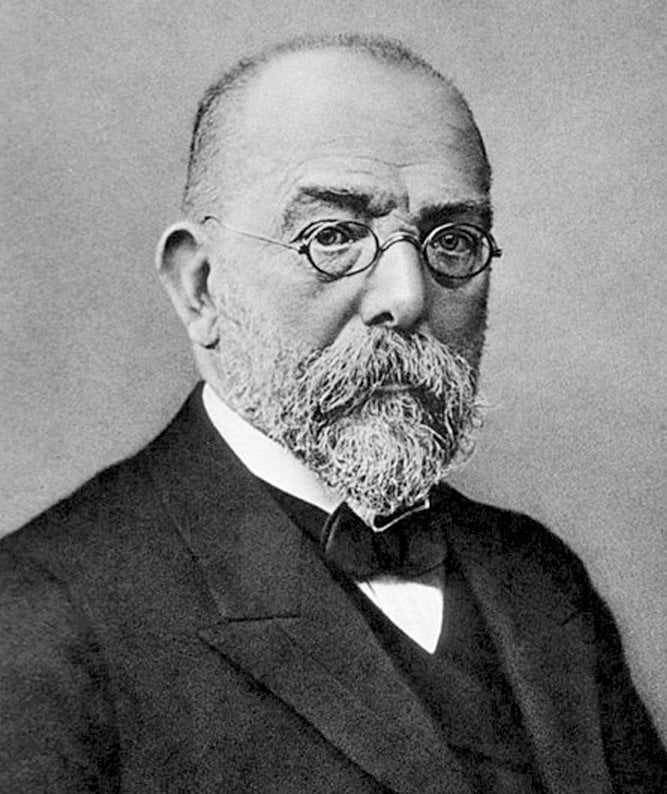 At the beginning of his research, Robert Koch did not have access to proper equipment or a laboratory. Along with that, he also had a day job to maintain. In spite of this, he made the time and managed to study anthrax, which was prevalent among farm animals at the time. Using tiny splinters he made out of wood, he inoculated mice with the blood of the spleen of animals infected with anthrax and healthy animals, individually. As you may expect, the former died of the disease, while the latter survived.

Also Read: If We Can Grow Bacteria In A Lab, Why Do We Only Know About 1% Of Them?

His experiment confirmed that infections can be spread by the blood of infected individuals. He further went ahead and isolated these creatures and bred pure cultures. In doing so, he discovered the occurrence of spores. These were round, durable structures that the bacteria formed when the surrounding conditions were not favorable. When the conditions became favorable again, they transformed back to their normal form. He also observed that organisms that had, for generations, been grown as pure cultures in a lab still maintained the ability to cause the disease.

Robert Koch also set down a series of 4 postulates that are essential for proving the pathogenicity of an organism. Koch also did remarkable work on tuberculosis. Until then, the popular belief was that TB was an inherited disease. However, Koch was convinced that it was instead the work of a microorganism. Using his postulates, he managed to prove that the causative agent was Mycobacterium tuberculosis. For this groundbreaking work, Robert Koch received the Nobel Prize for physiology and medicine 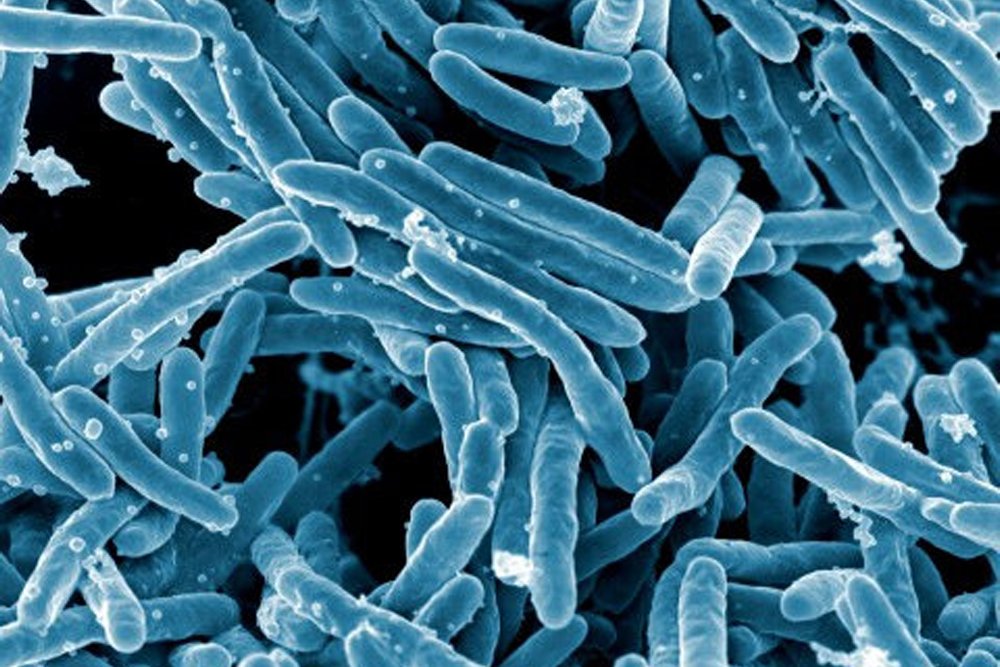 Robert Koch laid down four main postulates that are essential in establishing a microbe as the causative agent for a disease.

Once a pathogen has met these above criteria, according to Koch, it can be accepted as the pathogen for the said disease. 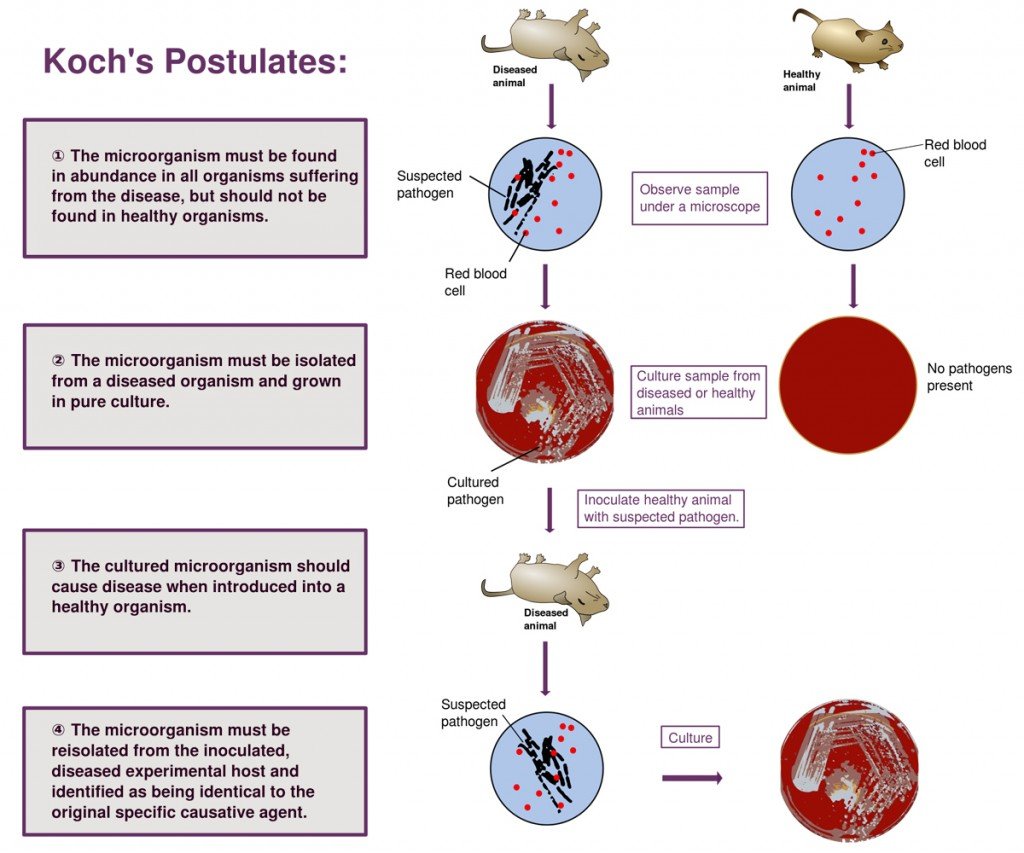 These postulates were, and still are, considered the gold standard within bacteriology studies. However, as the general understanding of diseases and pathogens grew, it was clear that some of these postulates would have to be tweaked. For instance, Koch himself changed or altered the first postulate, which came after the discovery of carriers. More specifically, this related to the asymptomatic carriers of cholera and typhoid fever. Carriers are people who are infected, meaning that they have the pathogen in them, but do not suffer from the disease. Another factor was that the same disease doesn’t always manifest in the same way in all affected individuals.

The second postulate also wavered over time as our understanding grew, as it is not possible to grow all pathogens or microbes under laboratory conditions. In fact, it was due to these postulates that development in the field of virology, or the study of viruses, was stalled for some time. Viruses do not classify as either living or dead. These creatures are alive only so long as they are infecting a host cell. Therefore, since they couldn’t be grown in a lab, they weren’t accepted as the causative agents for diseases.