Bacteria communicate via quorum sensing, which is a cell density-dependent process used to communicate with one another in order to regulate gene expression.

Remember the good old days when going out with friends and family wasn’t a risky proposition? Go back to when coordinating plans for big groups was normal. As joyous as group gatherings were, one thing I’m sure no one misses is how difficult it was to get everyone’s schedules to align and pick a common date. Never mind getting everyone to mutually agree to a venue or restaurant. Communication within large groups is quite a skill!

Communication sounds simple, but is actually quite complex. Ever asked your significant other “What’s wrong?” when they looked like they were in a foul mood, only for them to shout “Nothing!”?

Human beings, sitting atop the food chain with the most developed brain and social structures, still struggle to get their messages across to others of their kind. What if I told you that humble, single-celled bacteria have already nailed this down? They have evolved a way to communicate amongst themselves in perfect harmony. No arguments, no disagreements, just getting the message across in a clear manner. Shocking, isn’t it?

This minuscule little life form only one cell in size, has no ears or mouth, and no big brain to decode signs and symbols. How then does it “talk” to others of its kind? Quite simply, bacteria use chemicals to send messages to each other, in a process called Quorum Sensing (QS).

What is quorum sensing?

Quorum sensing, as the word quorum implies, is a way of counting the bacterial population at a given site, in order to collectively activate certain group behaviors.

Many bacteria tend to form a group and accomplish their task together. They have systems that make them express different behaviors at different population densities. Quorum sensing is how they all know how large their group is at a particular location, which then stimulates some collective behaviors that are programmed into their genes.

These collective behaviors include tasks like bio-luminescence (producing light), antibiotic production, biofilm formation, host infection, and even the exchange of genetic information (conjugation), just to name a few.

When was this mode of communication discovered?

Sometime in the last century, scientists were puzzling over a bioluminescent species of bacteria – Vibrio Fischeri.

V. fischeri is a species of marine bioluminescent bacteria that can be found floating on ocean water or layered on squids. They are in symbiotic relationships with different marine animals to offer this light in exchange for food and shelter. During the day, they produce light to camouflage their hosts, while at night, they make it easy for their host to see.

These particular bacteria produce their characteristic glowing light, but only at certain population densities. Scientists could not get them to produce this bioluminescence in smaller numbers, which left them scratching their heads. Finally in 1970, they figured out the answer – quorum sensing. Squids have a symbiotic relationship with V. fischeri where it allows them to live on their bodies. In exchange, the squids make use of the light they produce. (Photo Credit : Narrissa Spies/Wikimedia Commons)

The Mechanism of Quorum Sensing

The key to quorum sensing is having a large enough bacterial congregation for the behavior to occur. Every bacterium marks its attendance by releasing special signaling molecules known as auto-inducers into the environment around it. These are the bacterial equivalent of animal hormone molecules.

Bacteria naturally produce and release these auto-inducers, which flow freely into and out of the cell by the process of diffusion. As bacteria continue to multiply and increase in number, more of these signaling molecules are produced and released into the environment. All of the bacteria can sense this increasing amount of signaling molecules through receptors on their surface. Eventually, a certain concentration, known as the threshold concentration, is achieved.

At this point, the bacteria realize, “Oh wait! There are so many signaling molecules around and inside me. That means enough of my pals are nearby. Time to start working on our group task.”

There are numerous forms of signaling molecules. The type produced and released depends on the species of bacteria and the task to be carried out.

V. fischeri makes a special light-producing enzyme called luciferase. Since a single bacterium cannot produce enough “light”, it becomes a waste of resources for it to do so alone. Nature is efficient and has programmed these bactera to produce their light only when they are in sufficient numbers to achieve a glow.

V. fischeri  produces an enzyme called AHL synthase. AHL synthase then produces AHL (N-acyl homoserine lactone), which is the auto-inducer the bacteria releases into its environment.

Once AHL starts to flow back inside the cell, it activates certain genes responsible for the production of luciferase. In this way, this species of bacteria starts to glow only at high population densities. The process of Quorum sensing in V. fischeri, which leads to the activation of genes required for bioluminescence. (Photo Credit : Caroline Dahl/Wikimedia Commons)

Are there other ways of quorum sensing?

Just as humans have different languages, bacteria have different kinds of signaling molecules. There are two kinds of bacteria: gram positive and gram negative. The main difference between the two is in terms of cell wall thickness and composition. If you’d like to learn more about gram natures, refer to this article.

The mechanism of quorum sensing is dependent upon the gram nature of the bacteria. Gram-negative bacteria like V. fischeri use auto-inducers, such as AHLs. The AHLs use diffusion for movement into and out of the bacterial body.

Gram-positive bacteria have a slightly altered mechanism. Their signaling molecules are peptides, small strings of amino acids, in place of AHLs. Instead of diffusing out of the bacterial cell, they are pushed out by transportation pumps.

Why do bacteria need to communicate?

Take, for example, a pathogenic bacterium that has entered a body and starts to express its virulence (disease-causing) genes, and as result, alerts the host’s immune system. The poor lone bacterium will get pummeled by immune cells.

With quorum sensing, however, bacteria can wait, increase their numbers and then unleash their dominance over the body.

The bacteria initially stay quiet, in stealth mode, while continuing to replicate. Once the bacterial community is large enough, it gains confidence to pick a fight with the host’s immune system. It is only then that it will activate the genes required to cause disease.

Another example is of a very social bacterium Myxococcus xanthus. These bacteria are present in the soil and move about in groups in search for food. Now, if all one does is move around in a small area and eat what you find there, eventually the food runs out.

A lack of food activates a preset program in their genes and they form what are called “fruiting bodies”—a scrunched-up lump of dormant bacterial spores—waiting to be carried by the wind to other food-rich locations. 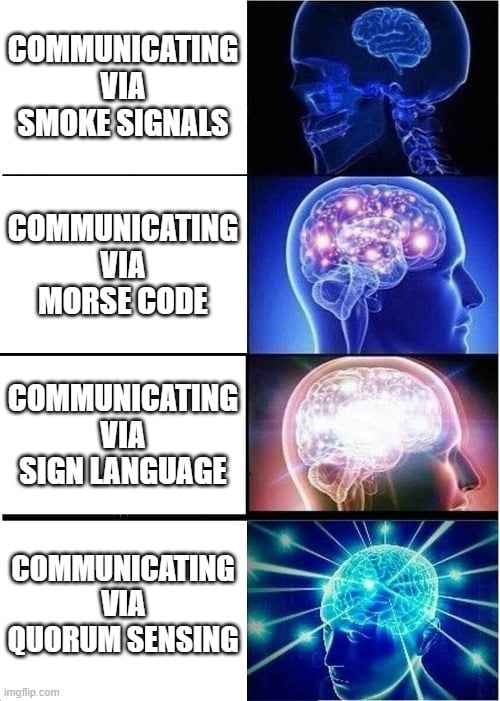 Scientists are actively figuring out how to manipulate QS systems to develop new strategies in combating disease and increasing antibiotic production.