Construction of Mount Rushmore National Monument began in 1927 and was completed 14 years later in 1941. The monument depicts the faces of four presidents of the United States: George Washington, Theodore Roosevelt, Thomas Jefferson, and Abraham Lincoln. The construction of the monument was completed without any fatalities.

Architectural marvels all around the world have captured our attention for thousands of years. There is something so mysterious about these structures that always captures our attention. The more we look at them, the more we feel in awe of their size, scope, and the amount of work that had gone in to their creation.

Mount Rushmore National Memorial is a sculpture carved into Mount Rushmore. Bewildering as it is to see this amazing sight, the story behind its creation is even more impressive. The monument depicts the faces of four presidents of the United States: George Washington, Theodore Roosevelt, Thomas Jefferson and Abraham Lincoln. Huge busts of these legendary presidents are carved on the granite face of the rocks.

As expected, there was a huge amount of planning, money, time and effort that went into carving these realistic-looking faces on the side of the mountain.

How Did It Come Into Existence?

The construction began with the head of George Washington in 1927 and was completed 14 years later in 1941, when the head of Abraham Lincoln was finally completed. Initially the chief sculptor, Gutzon Borglum, wanted a sculpture that would go down to the waist of the presidents, but due to constraints on the availability of funds and the country’s poor economic stability after the Great Depression, it was decided that only the faces would be sculpted. (Source)

Selection Of The Site:

There were many cliffs in the area that were in contention for the monument, but Borglum chose Mount Rushmore, as he decided that it would be the easiest to work on. Also, he was an art lover, so he wanted the first light of the day to fall on the faces to illuminate them. Mount Rushmore is 400 feet high and 500 feet wide and the majestic east-facing wall instantly impressed him.

Geology Of The Area:

The natural forces of heat, pressure and erosion have played a vital role in the stability of Mount Rushmore over the past seven decades. The rocks upon which the faces are carved are the ‘crystalline core’ of the Black Hills. The Black Hills also have a very interesting geological history.

Almost 1.5 billion years ago (a very long time ago), a giant mass of molten rock began to rise up from the crust of Earth. When this massive chunk of molten rock began to cool, the core of the Black Hills was formed. Since the rate of cooling of the rock was uneven on different sides, two kinds of rocks were formed: fine-grained rock (by quick cooling) and coarse grained pegmatite (slow cooling). A huge portion of that quickly cooled rock now forms the upper part of Mount Rushmore. Mount Rushmore basically consists of two kinds of rocks: ancient granite and metamorphic rocks. The light-colored rock that you see on the faces is fine-grained granite. Here’s a picture:

Also Read: What Are The Ancient Seven Wonders Of The World? Furthermore, the darker layers of the rock that contrast with the above type of rocks is schist. It is a type of metamorphic rock (a rock formed by physical and chemical changes on an existing rock) that has sheet-like grains in it. Have a look: The most obvious challenge when working with mountains is, well… working with mountains! The first priority had to be the safety of the workers, most of whom were miners, sculptors or rock-climbers. Dynamite and minor explosives were used to blast off huge sections and deformities in the rocks. In fact, 90% of the carving was done by dynamite alone! Completion of the face of George Washington

Jackhammering and exploding accurately (using dynamite) provided a rough sketch of the design on the mountain. Then, trained sculptors went to work carefully chiseling the rocks to create the impression of a human face. Holes were made in the area where the irises of the eyes were supposed to be, and then carefully cut cubes were placed in position to give a reflection highlight, which made it look more real and lifelike.

At any given time, there were roughly 40 people working on the monument. During all that work, the many workers were supported by steel cables alone.

Mount Rushmore: What Does Nature Have To Say About It?

The good thing about Mount Rushmore is that granite erodes very slowly, so this monument is going to loom above the Black Hills for a long, long time. In fact, granite erodes roughly 1 inch every 10,000 years, which is great news for this piece of American history.

However, frost wedging is something that needs to be considered. Due to the presence of cracks on the natural surface of granite, water gets into it (during rainfall). When the temperature drops below the freezing point, this water exerts a very high pressure on the rocks, gradually expanding the cracks. However, not to worry, water can be prevented from entering the cracks by caulking those cracks with a silicon solution.

In other words, Mount Rushmore is here to stay for a long time. Mount Rushmore: Before and after

Also Read: Why Was The Eiffel Tower Built?

The best thing about Mt. Rushmore is that not a single fatality was reported during the construction of the monument, which is what makes this unbelievable accomplishment even more impressive.

To this day, more than 3 million people visit the monumental site every year, which is no surprise at all, given the sheer brilliance of the entire structure and the hard work that went into its construction. 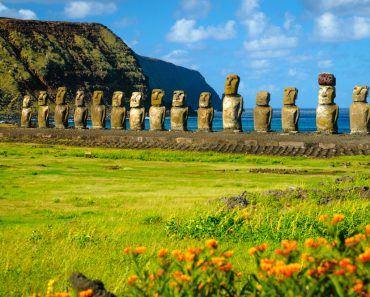