Anxiety and digestion are connected via a common link called serotonin. Serotonin is produced in the gut. It mediates both digestion and anxiety.

In the film The Pursuit of Happiness, Will Smith says, “Maybe happiness is something we can only pursue. And maybe we can actually never have it, no matter what.”

But here’s a little secret that should make you smile, your brain and your gut have their own happiness-producing factories!

Serotonin, popularly known as the ‘happy chemical,’ has earned this nickname because it literally makes you happy. Additionally, it is also responsible for modulating mood, perception, anxiety, appetite, sleep, and much more.

However, before we try to explore how this master puppeteer pulls the strings, let’s take a step back and look at the precise definition of a hormone.

Hormones in a nutshell

Our body is a complex system of organs, tissues, and many other things. To get these messages across, we require well-developed postal services. One of them is the nerves. They transmit messages to and from the brain in the form of an electrical signal.

However, these signals are short-lived. Some instructions must remain within the system for longer than a fraction of a second. This is where the hormones come into the picture. Hormones are chemicals released into the bloodstream. They take a long time to act, anywhere from minutes to hours. When it comes to our mood, multiple hormones work in synergy, affecting the brain in different ways.

So, for your hormones, ‘to do or not to do’ is never the question.

Now, let’s bring the spotlight back to the star of the show.

Serotonin is produced when tryptophan, a component of proteins, is chemically changed to form 5-hydroxytryptamine (5-HT). This is an extremely vital hormone not just for humans, but also for all other organisms that breathe oxygen, like plants and even some bacteria. Serotonin also leads to an increase in division, migration, and maturation of cells, thus enabling fetal development. More than 90% of your body’s serotonin is produced in the gut by enterochromaffin cells, where this hormone plays intriguing roles in digestion.

When food enters your mouth, the taste buds are activated. This activation sends a signal to certain nerve cells that trigger the release of serotonin.

This helps in sending taste information to your brain. Once the food enters the gut, it undergoes a rhythmic wave-like motion called peristalsis. Peristaltic movement is required to move the food forward in the gut, and this motion is mediated by serotonin. 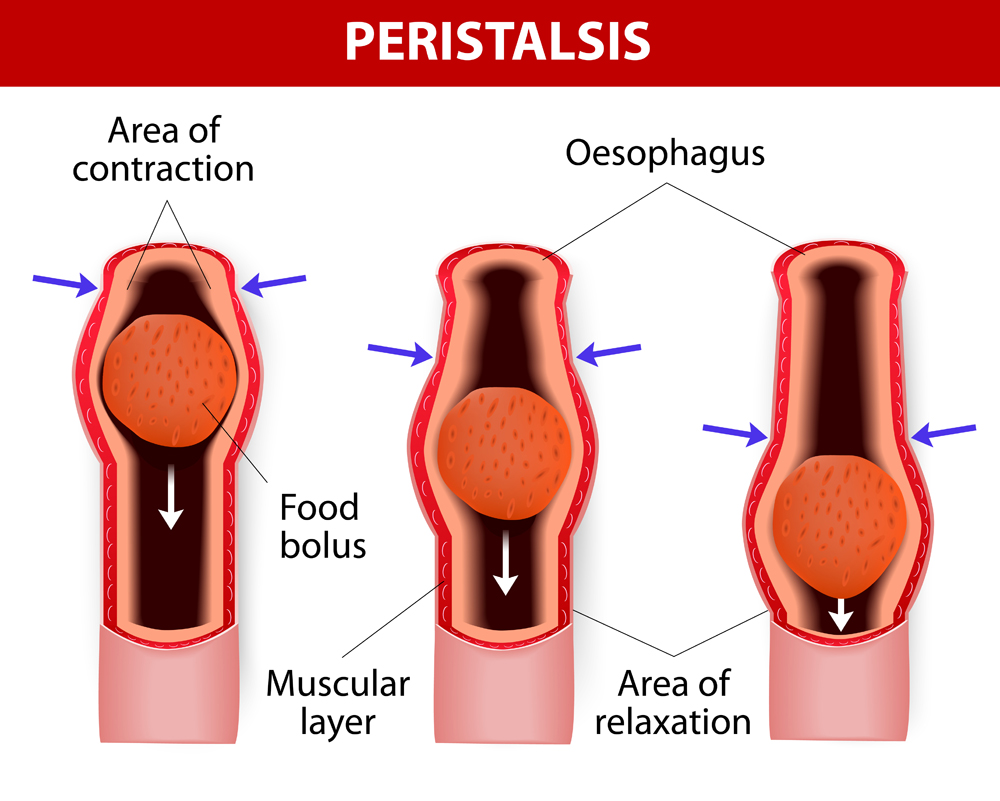 Passage of food through the stomach. (Photo Credit : Designua/Shutterstock)

It also mediates several secretions, like those from the pancreas. In this role, it facilitates the gut in communicating its need to the pancreas for more digestive juice. It is also responsible for reducing your appetite and gradually giving you a ‘full’ feeling.

When you consume a toxicant, serotonin is secreted in excess. This stimulates the nausea center in your brain, which results in vomiting. Along with this, an increase in serotonin also results in peristalsis. This, in turn, hastens the transit time of food within the gut, giving rise to diarrhea. Both mechanisms expel the toxicant from the body. A recent study has also shown that the host’s gut bacteria regulates serotonin production. What happens if you lose your ‘happy chemical’? Do you feel sad all the time?

Anxiety is the feeling of insecurity. This emotion is natural and hastens our ‘fight or flight’ response in the face of danger. Unfortunately, for some people, this reaction runs into overdrive and the person experiences long-term anxiety, giving rise to anxiety disorders. It was observed that serotonin levels were reduced in patients suffering from these disorders. However, whether the lack of serotonin causes anxiety or anxiety leads to reduced serotonin levels is not yet well established.

We have seen how serotonin acts as a hormone in our digestive system, but it is clearly a dual player! In your brain, it also acts as a neurotransmitter. Your brain and your stomach are connected by a system of neurons called the brain-gut axis.  This communication system is known to link certain emotional and cognitive centers of your brain with functional aspects of your gut. Hence, patients suffering from mood disorders have been shown to exhibit digestive dysfunction.

Can certain digestive problems be treated by appropriate psychological treatment? Can the treatment of anxiety disorders be aided with certain dietary modifications? We don’t know just yet! Serotonin’s role in mediating several systems in our body is far more complex than previously assumed. Despite being discovered over 60 years ago, its functioning in the human body remains quite ambiguous. However, the next time you feel nauseous when you eat something bad or feel restless before an exam, you at least know which hormone is pulling those strings!