The high temperature of Earth’s core is due to the stored primordial heat, as well as radioactive decay.

Imagine it’s the dead of winter and you are soaking up a good night’s sleep tucked inside your blanket. The next day is already planned, and you’ve decided to take your dog for a stroll in the park. You wake up feeling pretty excited, but alas, when you look outside the window, the snow has covered every single speck of soil.

Suddenly, you remember one of the topics you were studying yesterday and begin to feel confused. You’re sure that you read that the Earth’s core is bubbling hot. If that’s the case, where is all that heat disappearing to, and why does the snow pile up if there’s so much heat down there?

If this thought process has ever passed through your head, it seems like you may have missed out on a lot of important points about the Earth’s core!

Yes, it is extremely hot, but it has been like that since the birth of the Earth. Instead, the hot core is why you are able to exist on this planet! Does that sound strange? Well, it’s not. Earth’s hot core is crucial for our ongoing existence.

Before we travel down to the deepest point inside the Earth, let’s try to understand a bit more about the layers of the Earth.

The Earth – Layer by Layer

Although we humans have progressed to the point where we are able to take a photograph of a black hole, unraveling the mysteries of our own planet has never been easy. However, the analysis of rocks brought out by volcanic eruptions and the study of seismic waves (waves generated inside the Earth due to earthquakes, volcanic eruptions, or any other disturbance) has helped us better understand the internal structure of our planet.

The Earth is not one homogeneous solid, but is instead composed of a number of layers. Earth was created with the birth of the solar system around 4.6 billion years ago. Initially, it was just a ball of gases, but as the gases reacted with each other and materials of varying densities began separating, Earth became what it is today—a huge rocky planet with an onion-like interior. 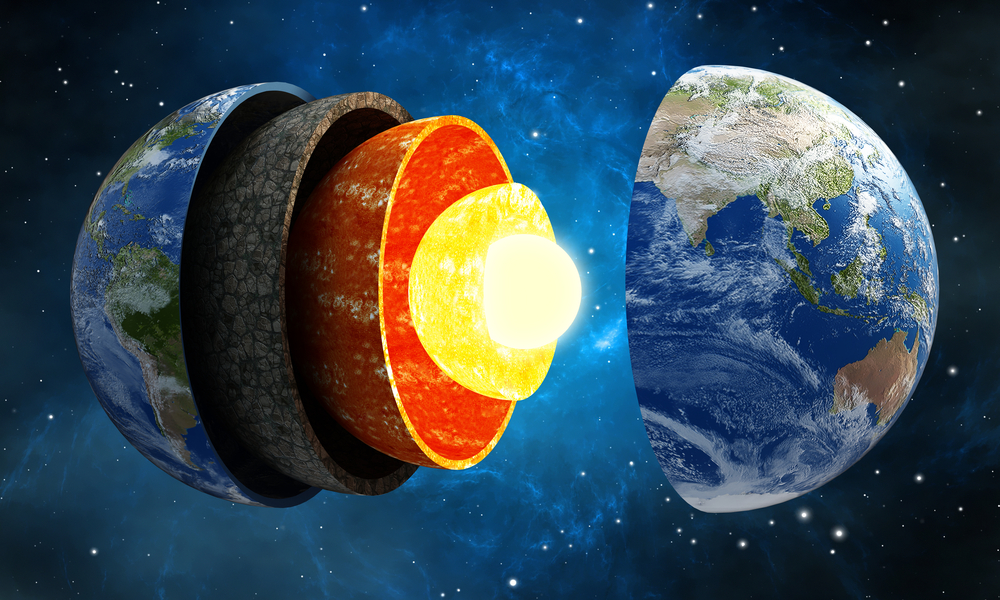 The outermost layer of the Earth is the crust. This is the layer where we live, build houses, and plant trees. The crust is pretty thin if we compare it to the other layers. Oceanic crust is about 8 km deep and is mostly composed of basalt and continental crust, which is around 32 km in width and is mainly composed of granite. 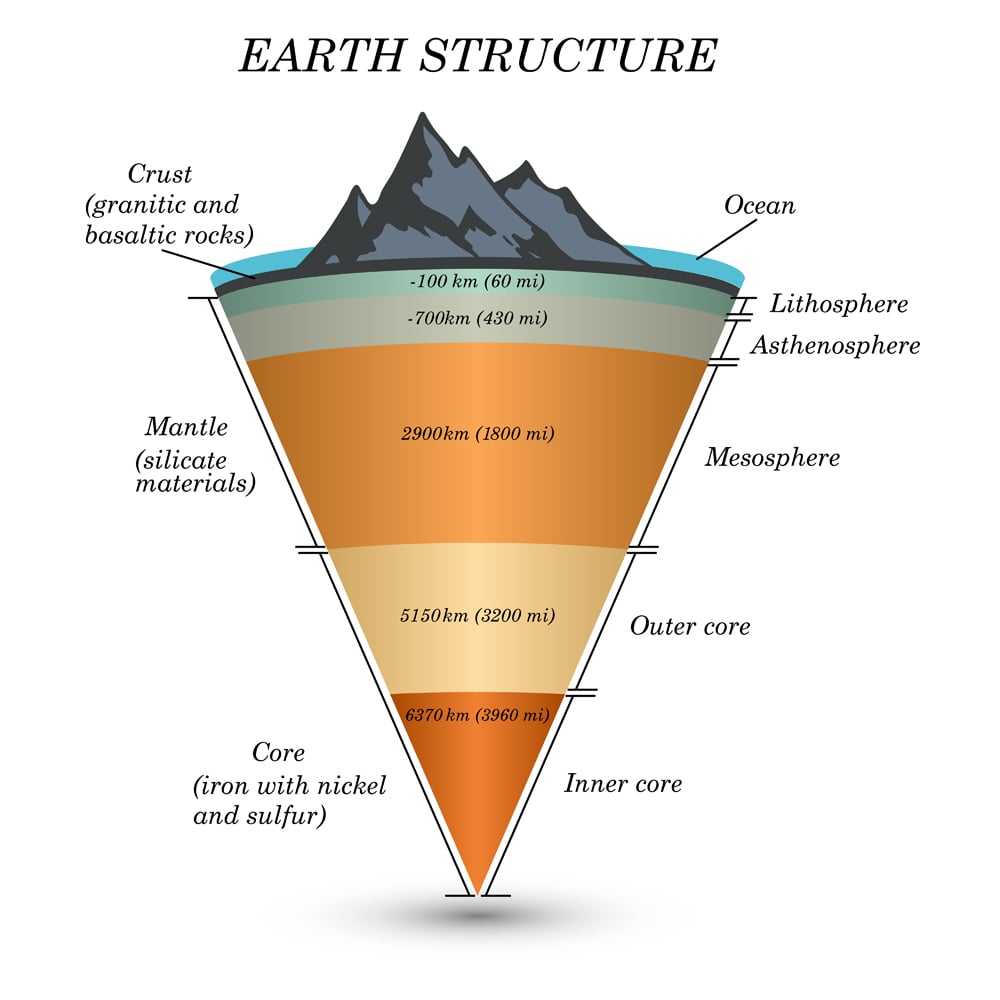 Below the mantle lies the core, which is divided into two portions—the outer core and the inner core. The outer core is mainly composed of iron and nickel and is completely in liquid form. It has a very high temperature, ranging from 4,000 to 5,000 degrees Fahrenheit. It is approximately 2,300 km thick.

Why is Earth’s Core so Hot?

For we humans living merrily on the crust, it’s hard to imagine that the Earth’s core can have a temperature that is even higher than the sun’s surface temperature. The real question naturally follows… how is our 4.6 billion-year-old Earth generating so much heat? There are two major reasons behind the Earth’s flaming core.

Firstly, it is due to the process by which our planet was formed—accretion. When the solar system came into existence, our planet also began its journey around the sun. The gravitational pull was so strong that a number of meteorites and several other objects came together to form a large planet. Whenever such accretionary processes occur, the amount of heat produced is humongous. 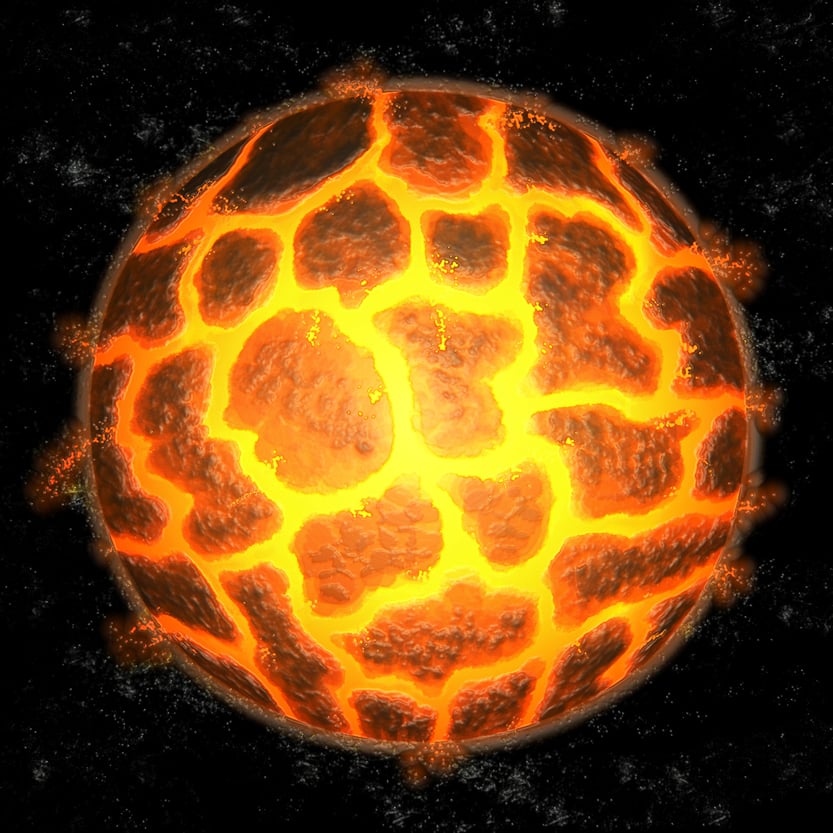 After this planetary formation process was over, materials started separating into layers according to their density. The densest materials settled in the core. Even this settling process produced a lot of heat.

This primordial heat of Earth is still present in the core because our large Earth was unable to dissipate it quickly when it was created and now this heat has settled. It can only dissipate through the crust, but since the plates act as a blanket and the mantle is not a particularly good transporter, the heat is here to stay for a long time.

The second reason behind the heated core is the decay of radioactive elements, such as Uranium. Radioactive decay is responsible for the formation of daughter isotopes, which is an exothermic process.

However, is this hot core really helping us in any way? Let’s find out more!

While Earth’s core is as hot as the sun, it is paramount in sustaining life on our planet. The outer core is liquid and thus keeps flowing. Convection currents are generated due to this motion, which is the cause behind Earth’s magnetic field. This magnetic field in turn saves us from solar flares and maintains Earth’s habitable atmosphere. The inner core helps in stabilizing this magnetic field. 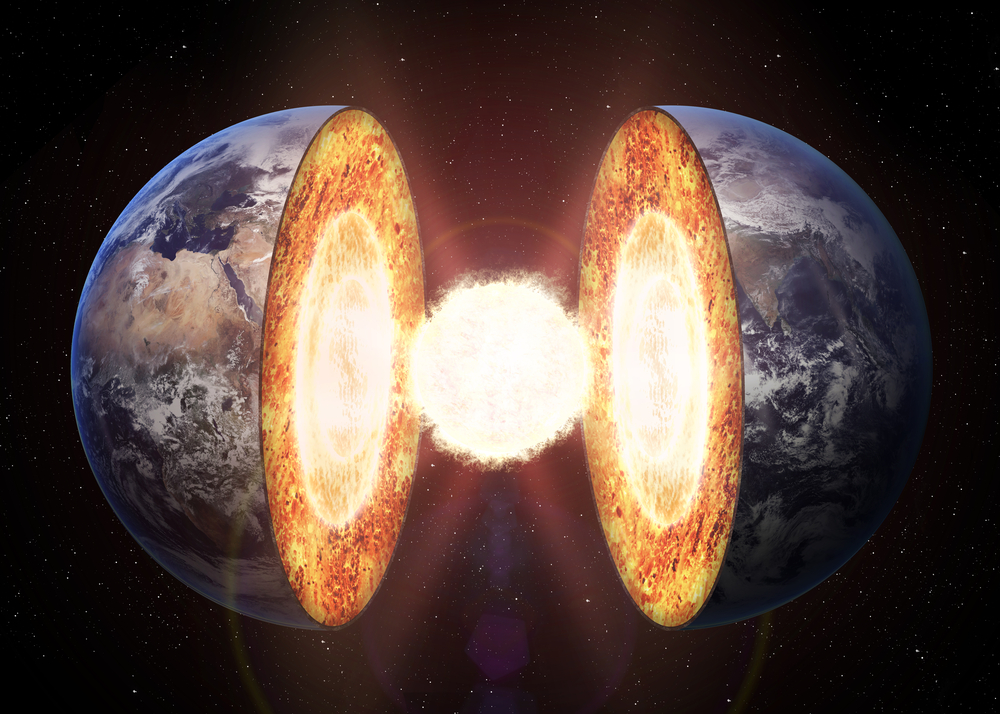 The convection currents in the outer core and the heat it generates create motion in the above layers, especially in the mantle. This movement helps the plates in shifting, thus leading to the shifting of continents and the creation of new landmasses.

Earth’s core is vital for the existence of not only humans, but all living beings, including plants. If it went cold, became too solid or too liquid, there would simply be no way for life to survive or thrive. Such is the precious balance that Earth’s core brings to our world! 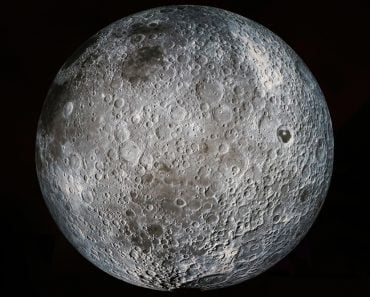