Wet markets are found in many South Asian countries; these are markets that sell fresh produce, such as fruits, vegetables, seafood and poultry. On the one hand, millions of people depend on these markets for food and income, but on the other, they can be hubs for new diseases.

Before the start of 2020, few people around the world had heard of wet markets. However, the coronavirus pandemic brought it straight out of a small dark corner and into the global limelight! By now, I’m pretty sure everyone has googled it at least once in the past few months. In case you haven’t, or weren’t able to fully grasp what wet markets are and how they harm humans and wildlife, this article is for you!

What is a wet market?

Some of you have likely heard of farmer’s markets, right? Well, wet markets are pretty similar. Wet markets are a collection of open-air stalls where fresh produce is sold. This can consist of vegetables, fruits, and/or meat. Some wet markets also sell live animals that are later slaughtered on site.

These animals may include poultry (e.g., chicken, ducks and pigeons), reptiles (e.g., snakes, crocodiles, lizards) and all kinds of mammals (e.g., dogs, cats).

A study conducted between 2002-2003 found that 212 bird species, 84 reptile species, 36 mammal species, and 5 amphibian species were sold in wet markets in southern China.

Although poultry markets are usually separate from fish and red-meat markets, more often than not, their stalls are found in close proximity of each other.

Why are they called “wet” markets?

Wet markets probably got their name because there are a lot of liquids involved or found here. For instance, fish and lobsters are splashing around in water tanks, the blood of slaughtered animals and melting ice to keep meat fresh. Sellers also keep pouring water to keep produce clean and fresh, and they also hose down their stalls every morning or evening to keep the place clean. Wet markets sell perishable items, rather than dry goods.

Where are wet markets found?

Wet markets are found in tropical or sub-tropical countries, with a large proportion of them in China, Thailand, Vietnam, and Myanmar. However, wet markets have also been found in some parts of America.

Wet markets are essential for millions of people, particularly in Asian countries. While many people have the privilege of shopping in large supermarkets, millions more don’t. Wet markets therefore play a central role in many lives and livelihoods. Moreover, most Asians prefer to eat fresh produce, in comparison to frozen and packaged food, as is common in Western countries. Usually, small families set up their stalls in markets and sell fresh produce to local community members. Buyers enjoy going to wet markets, as they get to engage in conversation with the sellers, who also help them choose which vegetables are in season or give them advice on how to cook certain vegetables or meat. 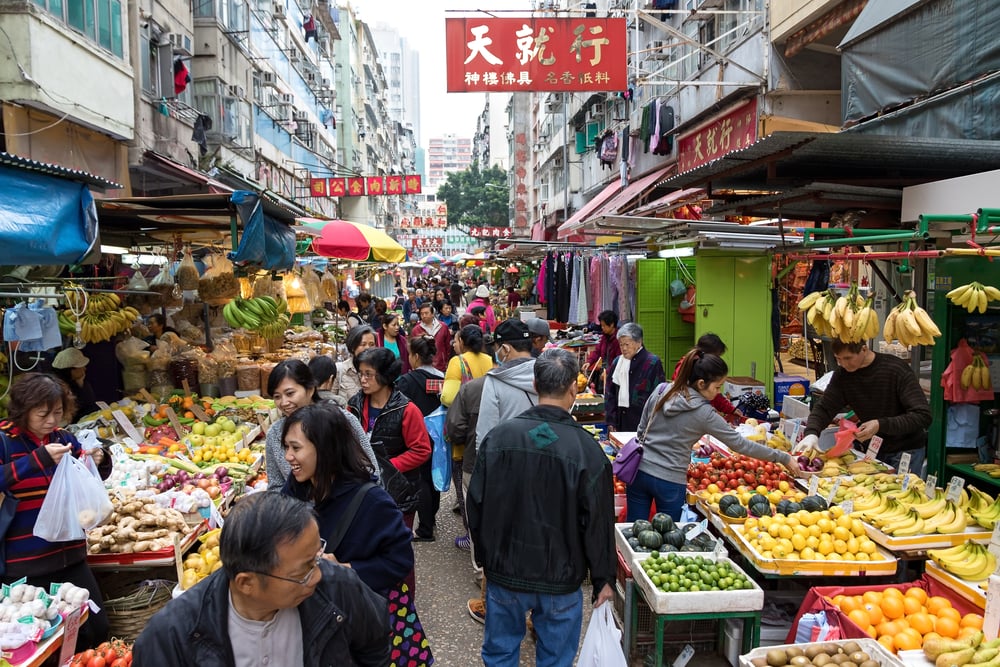 Wet markets are also very popular among those who practice zero-waste and sustainable living, as most of the products sold in wet markets are not wrapped in plastic and come without any packaging. Consumers can bring their own bags and reusable jars to fill up with whatever they need. Pretty cool, right?

Are wildlife markets and wet markets the same?

A lot of people tend to associate wet markets with wildlife markets, but the only commonality between them is the term “market.” The main difference between both markets is that wildlife markets trade different live wildlife species (think wolf pups or civets) or their body parts. Many of these species are endangered and sold (or traded) illegally. Some are even slaughtered on-site for consumption. Besides, wildlife markets also sell products derived from wild animals in the form of food, for trading exotic pets, and as medicine.

The primary concern with wet markets is the transmission of disease from wild animals to humans. Think about it, wet markets sell all kinds of animals that have likely been kept alive in stalls for days, if not weeks. More often than not, these animals are kept in poor hygienic conditions and in close proximity with one another, along with almost daily contact with humans. Such environments create optimal conditions for the evolution, spread and transfer of disease either from one animal to another or from an animal to a human.

Animals sometimes carry harmful germs like bacteria, viruses, fungi and parasites (known as zoonotic disease), which can cause serious illness among people. In fact, scientists in America estimate that 75% of infectious diseases among humans are spread by animals. Germs can spread through direct contact (with bodily fluids or feces), indirect contact (contact with contaminated surfaces), through food, water, or vectors (such as ticks).

In the past, several diseases have arisen and spread from wet markets, a classic example being severe acute respiratory syndrome, or SARS. During 2002-2003, a new viral respiratory disease emerged from China that spread across the world, infecting around 8000 people. The initial source was isolated in masked palm civets that were being reared in the region for food and medicinal purposes. It still remains unclear whether they were transient hosts or actual reservoirs of the virus. However, scientists were able to link the emergence of SARS to the commercial trade of this species in South Asia.

Similarly, certain bat species have also been identified as reservoirs for SARS-like coronaviruses, and it is believed that their trade led to the spillover of disease to other wet market animals and humans. Researchers also found the presence of Salmonella in rodents in Thailand’s wet markets because of their close contact with humans and food. In fact, scientists suspect that the novel COVID-19 virus originated from a wet animal market in China.

How do wet markets affect wildlife?

Unfortunately, many wet markets sell more than just poultry and seafood. Many are known to illegally sell endangered species, such as pangolins, civets, bats, turtles, snakes, wolf cubs, badgers and a multitude of other species. These animals are often kept in unsanitary environments and treated poorly, which causes stress among them. Just like humans, when an animal is stressed, its immune system weakens, which makes it more susceptible to catching a disease. When more and more stressed animals being kept in close proximity to other animals and humans, breeding grounds for new diseases are created.

On the other hand, the rampant increase of human populations and the subsequent demand for meat also threatens the survival of several species. For instance, wet markets in West Bengal, India are known to illicitly sell turtles, porcupine quills, manta rays and lizards, all of which are protected by law. Turtles, in particular, are a delicacy during festivals and over 150 kgs of turtle meat is known to be sold in such markets every year.

The majority of scientists expect that the world will witness an increase in zoonotic diseases in the future. In order to put a stop to this, we must have stricter rules and regulations to prevent people from illegally selling and buying wildlife and their products. While I hope you have learned a bit more about wet markets through this article, I also hope that you will make a conscious shift in your buying patterns and avoid buying any products that are sourced from endangered wildlife species.