Home
Nature
Universe
What Are The Magellanic Clouds?

Since ancient times, humans have been baffled by the beauty of celestial objects staring down on our insignificant existence from the cosmic reaches of the universe.

These wonders have long been worshipped as nature’s divine spirits of the omniscient. Soon enough, a barrage of stargazers and astronomers came on the scene, who might have been equally enthralled by the starry nights, but the idea of a supreme, incomprehensible soup of stars didn’t kindle their spirits. Instead, they began mapping those celestial courses, the trajectories they maintained, the shifting of twinkles every season and the patterns they formed on the black sky. Thus, the constellations were born. Around 964 AD, Abd al-Rahman al-Sufi Shirazi, a Persian astronomer, observed a rather mysterious cloud obscuring the bustling galaxy of stars in the dark of night. This couldn’t, obviously, be atmospheric cloud cover, or else it would have changed the visibility of the night sky. He mentioned these anonymous clouds in his scripture, ‘Book of Fixed Stars’. This might have been the earliest known documentation of The Magellanic Clouds.

Clouds of the South

Better instrumentation, documentation and technological advancements in high-powered telescopes soon found their way into the astronomical community, which paved the way for even more significant discoveries. Ferdinand Magellan spotted these clouds on his voyage in 1519, and they now bear his name.

The question remains…. what are these mysterious clouds?

The Magellanic Clouds are two irregular dwarf galaxies that are visible from the southern hemisphere. They belong to the “Local Group” (the galaxy group consisting of two clusters of galaxies in a dumbbell shape, the Andromeda galaxy and its satellites, on the one hand, and our Milky Way and its satellites on the other). The position of LMC and SMC with respect to The Milky Way galaxy (Photo Credit: AndrewRT/Wikimedia Commons)

For a long time, the Magellanic Clouds, also known as the Nubeculae Magellani, were thought to be a single, irregular and indefinable galaxy. However, soon enough, astronomers were able to observe the galaxy much closer, and discovered two distinct and separate regions.

The first region looks like more extensive and denser cloud cover, and is shaped like an irregular bar, called the Large Magellanic Cloud (LMC), whereas a smaller cloud, known as the Small Magellanic Cloud (SMC), is itself a small dwarf galaxy.

A Chunk of the Milky Way

At one point in our astronomical history, it was a  commonly accepted theory that the Magellanic Clouds were in orbit around the Milky Way. Eventually, this idea had to be discarded because the relative speed of these clouds might be too high for our galaxies to co-exist in that manner.

Are these rain clouds?

The constant inclusion of the term “clouds” might lead you to think that they’re rain clouds of the universe, just like we have stratus and cumulus clouds here on Earth. Sadly, our universe does not receive rainfall on such a massive scale. Although these clouds are composed of gas, it’s not water vapor they contain. These “clouds” are clusters of galaxies.

What are galaxies comprised of? Stars, stellar remnants, interstellar gas and dust.

And what are stars made of? Hydrogen and helium, in a constant state of nuclear fusion, which is exactly the composition of the Magellanic clouds. This dramatically diminishes the presence of metallic elements.

This abundance of gas is what enables the Magellanic Clouds to create new stars. This holds especially true for the LMC, which produces stars in very large quantities. An apt example of this would be the glowing-red Tarantula Nebula, a gigantic nebula that lies 160,000 light-years from Earth, and gives birth to countless new stars.

Significance of the Magellanic clouds

Although the Magellanic Clouds are situated very close to the Milky Way, they have also played a consequential role in our understanding of the distant Universe.

Henrietta Leavitt, an American astronomer,  studied the period-luminosity for Cepheid variable stars present in the SMC, which helped determine the distances of stellar objects in our expanding Universe. This became the first rung of our extragalactic distance ladder. A graph of the period-luminosity change vs. the period of variation in days helps measure intergalactic distances by observing the redshift in light. (Photo Credit: Nasa)

The low metallicity of the Magellanic Clouds, as compared to the Milky Way, aligns them more closely to the conditions of the early Universe, when the evolution and deaths of stars perpetually enriched the interstellar medium (the matter and radiation existing in the space between the star systems of a galaxy.). This gave astronomers a glimpse into the earlier Universe and the processes that might have been in action billions of years ago.

Folklore of the Magellanic Clouds

Situated in the far south of the sky’s “dome”, the Large Magellanic Cloud was, for a significant part of our history, unknown, and was therefore never mentioned in classical northern mythologies.

Undoubtedly, this was different for observers in the Southern Hemisphere. The constellation Mensa (“a Table”) was originally named after South Africa’s Table Mountain. An old folk tale referred to the Large Magellanic Cloud as a puff of smoke arising from a pipe-smoking contest being held on the mountain. Australian Aboriginal storytellers related the LMC to the campsite of an old man, with the SMC being the campsite of his wife. The couple, known jointly as Jukara, had grown too feeble to feed themselves, so other star beings pledged servitude to the old couple and brought them fish from the sky river,  better known as the Milky Way.

The short URL of the present article is: http://sciabc.us/y0nLn
Help us make this article better
Prev Article Next Article
About the Author: 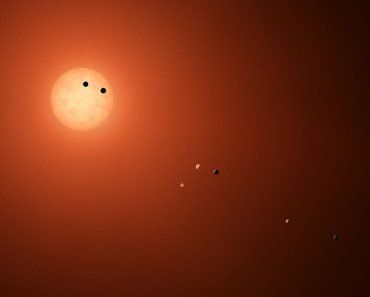