Enceladus is one of the 62 satellites of Saturn. In Greek mythology, Enceladus was one of the Giants who was born to Gaia or more popularly known as Earth and Uranus (also at that time referred to the sky).

When you peer into the endless abyss of space, the prevailing notion is that the brightest objects you see are stars, even though there are other celestial bodies that are as bright, if not brighter than them. However, there is one celestial body that is truly an anomalous entity. It happens to be one of the natural satellites of Saturn, a moon that is unusually bright and reflective for an orbiting celestial body, and it’s called Enceladus.

For decades, scientists were oblivious as to why this moon was so bright and reflective, but recently, it is believed that the mystery shrouding Enceladus has been resolved.

First, let’s take a look at the discovery and characteristics of the orbit and rotation of Enceladus. 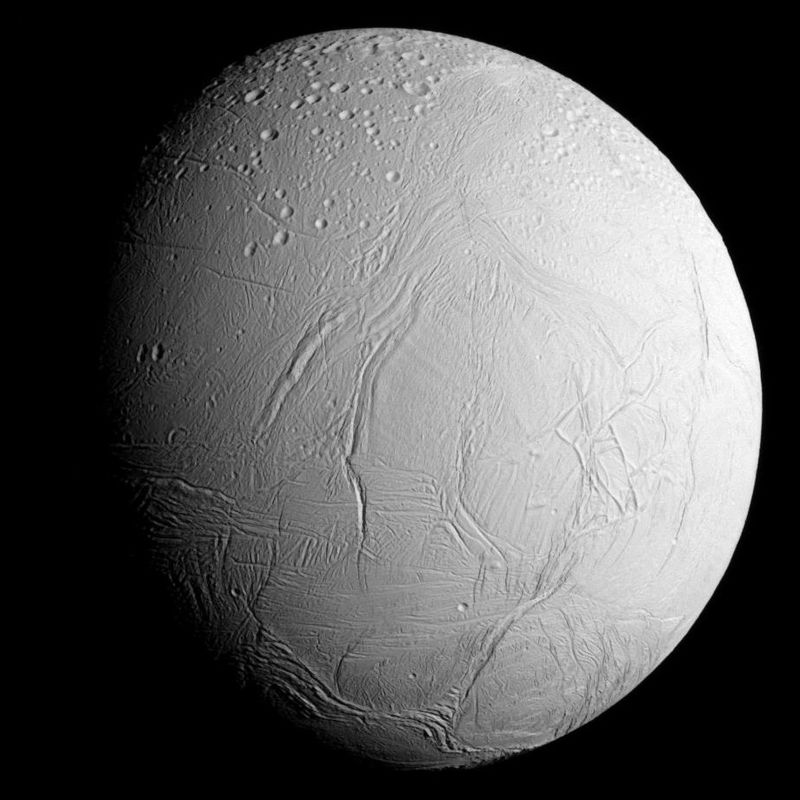 Enceladus is one of the 62 satellites of Saturn. It was discovered by the famous German-born English astronomer William Herschel on August 28, 1789, along with the help of the world’s first forty-foot telescope! The moon’s distance from Earth is 1.272 billion kilometers.

Before the Space Age, it was difficult for people to observe this anomaly, as Saturn’s rings are also highly reflective. Enceladus is found on the E ring of Saturn, which lies between 180,000 and 480,000 km from the center of the planet.

The inspiration for the naming of Enceladus comes from Greek mythology. In Greek mythology, Enceladus was one of the Giants who was born to Gaia or more popularly known as Earth and Uranus (also at that time referred to the sky). Within the E ring, its orbit holds at around 238,000 km from the centre of the planet. It orbits Saturn every 32.9 hours, fast enough for its motion to be observed in a single night of observation. Enceladus is also considered to be one of the major inner satellites, along with Dino, Tethys and Mimas.

The strange thing about Enceladus is that it revolves around both Dione and Saturn! For every revolution around the natural satellite Dione, it completes two revolutions around Saturn. Due to the multiple gravitational forces being exerted onto the satellite, it experiences a deformity in its shape, creating a tidal deformation in the structure of the satellite. Water volcanism is represented by a particular type of volcano known as a cryovolcano. A cryovolcano, unlike normal volcanos on earth, do not spew molten rock. Instead, they blast out water, ammonia or methane. Now, why does it make such a difference what the volcanos on Enceladus spew out?

Well, for that, we need to understand the nature of a volcano.

A volcano is usually a mountain or hill that has a crater atop it. Now, volcanos only erupt when there is a certain amount of pressure that needs to be relieved from below the crust. Volcanos only spew material that is present in the magma; in the case of Earth, this comes in the form of hot molten rock. However, the fact that cryovolcanos on Enceladus mostly spew water implies that there is a vast ocean below the thick icy crust of this natural satellite.

Enceladus geysers: An ocean below the surface

As mentioned, below the crust of this moon, a huge water body is present. When the pressure of that water body gets extremely high, the cryovolcano begins to spew out in order to relieve the pressure. This results in a new layer of ice, which keeps layering up each time the cryovolcano erupts. These added layers of ice have gradually made the surface smooth. The highly reflective nature of the moon stems from the smooth icy surface of the celestial body.

That being said, there is a dilemma here… ice is not all that reflective. Come to think of it, ice is highly refractive, so how does the moon reflect so much light?

Diffuse and specular reflection from a glossy surface. The rays represent luminous intensity, which varies according to Lambert’s cosine law for an ideal diffuse reflector. (Photo Credit : GianniG46/Wikimedia Commons)

Why is Enceladus so bright?

Now we did state earlier on that ice is less reflective than water. But there are certain instances were ice can be more reflective than water and that can be understood with the help of the Albedo Effect. This gives us the ratio of the diffuse reflection of the solar radiation to the total solar radiation. Diffuse reflection is a type of reflection in which the incident ray is not reflected in a single ray but instead reflects off as multiple diffused rays. This is due to the fundamental particle properties of the surface from which it is reflecting. To put this in simple terms, Albedo is a dimensionless quantity that tells us how well a particular material reflects sunlight.

Albedo values vary from 0 to 1. 0 indicates no reflection and 1 represents total reflection. A value of 0 means that the surface is a “perfect absorber”, one that absorbs all incoming energy, while a value of 1 implies that it is a “perfect reflector”. Ice that has a high content of salt (like our frozen sea water) has a higher albedo value than normal water or fresh water, which contain no impurities. Also, the water on Enceladus, as we have seen, contains methane and ammonia, which increases the Albedo Effect.

Now the sea ice on Earth is said to have an albedo value of 0.5 to 0.7. This means that the ocean reflects only 6% of the incoming solar radiation and absorbs the rest, while sea ice reflects 50-70% of the incoming energy. The sea ice absorbs less solar energy, which keeps the surface cooler. Furthermore, if we were to assume that the albedo value of ice on Enceladus is roughly the same, then the natural satellite is wholly covered in kilometers of thick ice, implying that it would reflect all the light falling on it, at a level greater than or equal to the reflective qualities of sea ice on Earth, thereby making it the most reflective celestial body in our solar system.

The short URL of the present article is: http://sciabc.us/xchs6
Help us make this article better
Prev Article Next Article
About the Author: