Taal Lake, Lake Hillier, Plitvice Lakes, Roopkund Lake and Lake Natron are five of the World Lakes that have baffled humans for centuries.

After reading that title, you must be wondering, “How on Earth can lakes be horrifying? What mysteries can our global waters hold other than some oddly-shaped fish or glowing algae?”. Well, you may be surprised, as nature never ceases to amaze us. Here are the five lakes which have challenged our rational thinking, baffled us to the point of awe and amazement, and at the same time, given birth to bewildering mysteries.

The countless scenic views found in the Philippines hold a unique wonder, as they are often obscured in mystery and folklore, legends passed down for untold generations. 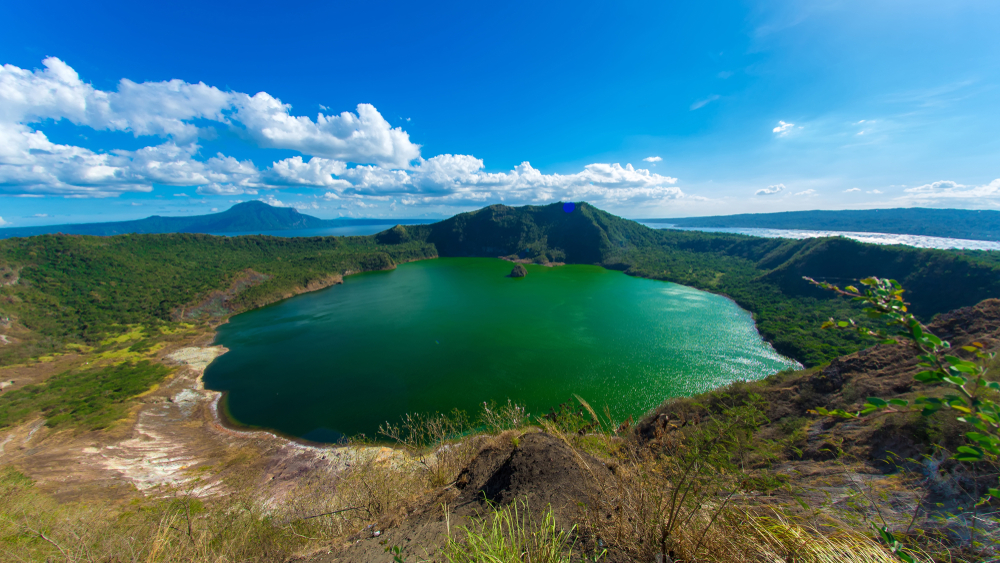 The legend of this lake describes a wise old man, Lakan Taal, who was appointed as the leader of the town of Tagaytay. He forbade any townsman to set foot on a distant mountain he pointed at, an upland thriving with natural resources. Owing to his esteemed reputation, no one disobeyed his order, until one beautiful day when he mysteriously disappeared. Years passed, but he was never found. The villagers decided to search the forbidden mountain, where they chanced upon a hole in the soil, overflowing with precious rubies, diamonds and pearls.

Filled with maliciousness, the greedy villagers began to fight over the newly discovered wealth, which is when Lakan Taal appeared, disappointed at finding this inevitable/predictable outcome. In a rage, he wished calamity upon his people, and soon the skies turned grey, thunder rattled, and a violent earthquake throttled the mountain, spilling fire and killing every last villager. Water engulfed the mountain from every corner, submerging the stones and the massacre in the depths of the lake. From that day forth, the mountain came to be known as the Taal.

That is an exciting tale, but also a bit hard to digest, because what makes this lake special is not the story, but its geology. It is the largest lake in the world, surrounding an island, which is also a volcanic one. Quite interestingly, this volcano also lies in a lake, making Taal a lake within a lake.

Australia’s prominent “Pink Lake” Hillier is truly a sight to behold. The exact cause of its strange bubblegum, strawberry milkshake pink colour is not known for sure, but scientists have a rough idea of its nature. 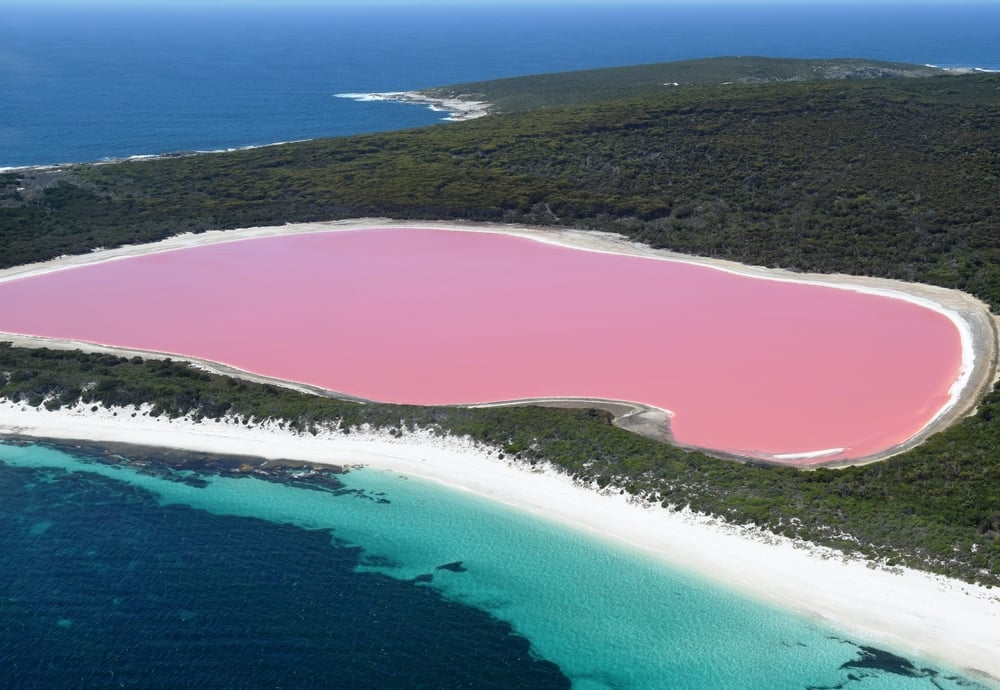 Lake Hillier, a saline lake situated at the edge of Middle Island, the largest of the islands of the Recherche Archipelago, Western Australia. (Photo Credit: matteo_it/ Shutterstock)

The colouration is due to the presence of a specific species of microalgae, Dunaliella Salina, that lurks in its waters. These are saline-thriving photosynthetic critters that generate energy in their bodies by soaking in the white sun rays, absorbing every wavelength of incoming light except orange/red.

They also produce carotenoid pigments (beta-carotene, found in carrots) which are the cause behind the pinkish hue of the lake. Bacteria and Archaea populate the bulk of micro-ecology for this hypersaline-lake, providing such an astonishing hue. However, Hillier isn’t the only pink lake in the world. Lake Retba, situated on the coast of Senegal, is another such marvel of nature’s rainbow.

Despite the colouration, these lakes are perfectly safe for swimming and will cause no harm to your skin, just like any other water body. However, drinking the hyper-saline water is a big no-no, as it will almost certainly lead to kidney failure!

Also Read: 6 Mysterious Phenomena That Occur In Some Of The World’s Oceans

A culmination of sixteen lakes interconnected by a series of ninety waterfalls, gleaming in a spectrum of cyan to azure; these are some of nature’s most elegant sculptures.

A glimpse of the Plitvice Lakes in different seasons. (Photo Credit: Mike Mareen & By Another Sun Photography/ Shutterstock & Pixabay)

Set in deep woodland, these forests are populated by deer, wolves, bears, boars and rare bird species, but these lakes are also rumoured to be the dwelling place of extinct Pleistocene Cave bears. Legends claim that these lakes were a boon to the drought-ridden region granted by a magical Queen.

Whatever the legends might claim, the Plitvice lakes have earned such a status from the mesmerising beauty of their luscious rapids and blissful pools arranged in a rather unusual way, carving into the limestone and continually changing their hue depending on the angle of sunlight, minerals and organisms dwelling within them. The Plitvice Lakes were declared a Unesco World Heritage site to preserve their fantastic freshness and fauna.

When the autumn sun shines upon the frozen glacial tarn, Roopkund melts, and when it does, hundreds of human skeletons float to the top of its waters, brewing up a cocktail of human soup. Where these skeletons come from remains a mystery.

The era of its horrifying discovery was during wartime, so the British rulers naturally assumed the carcasses to be an outcome of a Japanese massacre. However, when the bones were examined, it initiated a stranger mystery altogether. The deaths dated back to around 850 AD. Furthermore, all that were killed had died in a similar way—fatal blows to the head that cracked open their skulls. The injuries matched no weapon, and the history books could match no conqueror to this barbaric massacre.

So, what could have killed those 200 people in a single stretch, buried them deep in their graves and even more rooted in the mysteries of history? The eventual answer that anthropologists came up with was hailstones—really Massive ones. This is an undeniable inspiration from the old folksong of Roopkund that describes a Mountain Goddess invoking her wrath upon travellers passing through this uninhabited Himalayan lake, located at an altitude of 16,470 feet, in the district of Chamoli, Uttarakhand.

This might sound like a story right out of a fairy tale- this lake traps any animal or bird lurking around in its waters forever. However, Lake Natron is far from being fictional. Seated deep in Eastern Africa, Lake Natron of Tanzania can be deemed as a true marvel of nature, even without its death-inducing mysteries. 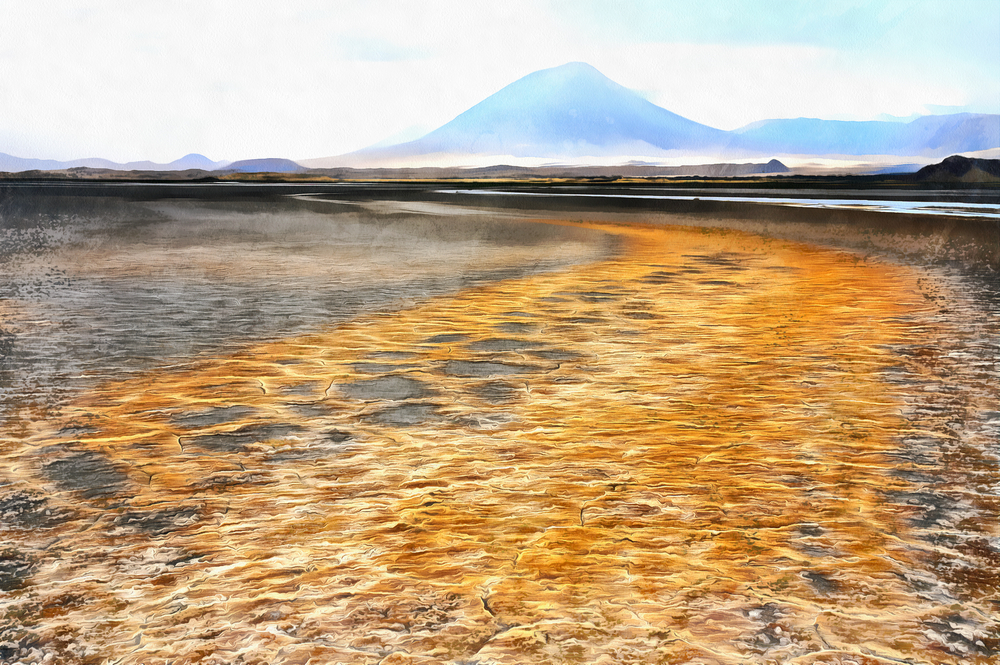 The sodium content of the waters has instilled a yellow hue to the lake. (Photo Credit: Idea Studio/ Shutterstock)

The secret to this “Satanic” lake lies in the composition of its water. The lake is abundant in natron, a naturally occurring sodium compound containing a mixture of sodium carbonate, bicarbonate, chloride and sulphates. This boosts the alkalinity of its water to a whopping ten on the pH scale. Whenever a bird or animal strays in to quench its thirst in the lake, the boiling water (owing to its geographic location) kills the animal, submerging its body beneath the depths. The natron then quickly works on the body, calcifying the carcass and sending it floating back up to the surface, so a statuesque skeleton emerges, carved clean by nature!

Also Read: Science Of The Dead Sea: Why Is It Called The “Dead” Sea And What Lives There? 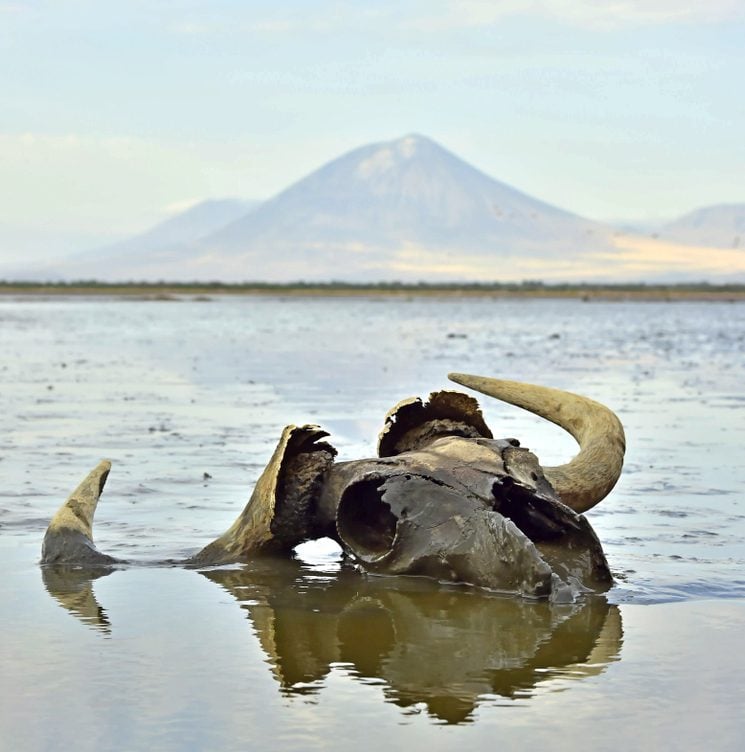 The carcass of a wild beast calcified in the saline water of Lake Natron. (Photo Credit: Sergey Uryadnikov/ Shutterstock)

Occasionally, migrating birds come down to the lake’s surface, thinking that it is empty space (the chemically dense waters of the lake give it a glassy finish, creating an illusion). Such illusions in nature have fooled even humans. On December 11, 2007, a  group of wildlife documentary makers flew their helicopter into the lake, falling victim to the same optical illusion. Soon enough, the caustic waters began corroding the helicopter, and the pilots barely escaped with their lives!