Of late, there has been a lot of talk about global warming and climate change across the globe. A general global temperature rise has raised many eyebrows and led to spurious discussions in many countries.

Now, in terms of the effects of a global temperature increase on ocean levels, have you ever wondered what a temperature increase of a few degrees would translate into, as far as oceans are concerned? Try to imagine a century from right now: will be be underwater? Or is this whole problem being blown out of proportion? Does the melting of polar ice caps due to constant temperature rise mean that there will be some sort of apocalypse like the ones they show in disaster movies?

Temperature Rise in the 20th Century

Researchers say that the temperature of Earth has increased half a degree Celsius in the last 100 years. Due to this general temperature rise, there has also been a rise in ocean levels – an average rise of 6-8 inches (15 to 20 centimeters) has been observed. To a layman, this may not seem like too much, but ask any geologist or ocean enthusiast and you will realize just what this all means to the world and civilization as a whole. There is a general understanding that if the global temperature increased due to global warming, then there would be rapid melting of glaciers on a global scale, which would first overwhelm the sea, and then sweep away our entire civilization. While environmental agencies and activists may push this prophecy of doom, would the rise really be that drastic and extreme? The short answer? No. When the temperature continues to constantly increase, some parts of glaciers heat up, begin to melt, and therefore develop cracks on their surface. Further temperature increase means that small and large chunks (depending on the parent glacier) will break away from the larger landmass and fall into the ocean. Needless to say, this increases the ocean levels slightly, but it’s not enough to cause a global catastrophe – yet!

These floating chunks of glaciers become icebergs that wander through colder ocean regions and melt as temperature rises. Again, the melting of icebergs does not amount to a huge rise in ocean levels. In order to stay afloat, an iceberg displaces an amount of water equal to its own weight, so when it melts, it simply ceases to displace that much water. In other words, it does not contribute much to the rise. That being said, a temperature increase does make the breaking of glaciers more likely and when a glacier enters the ocean, the overall level does rise a little. 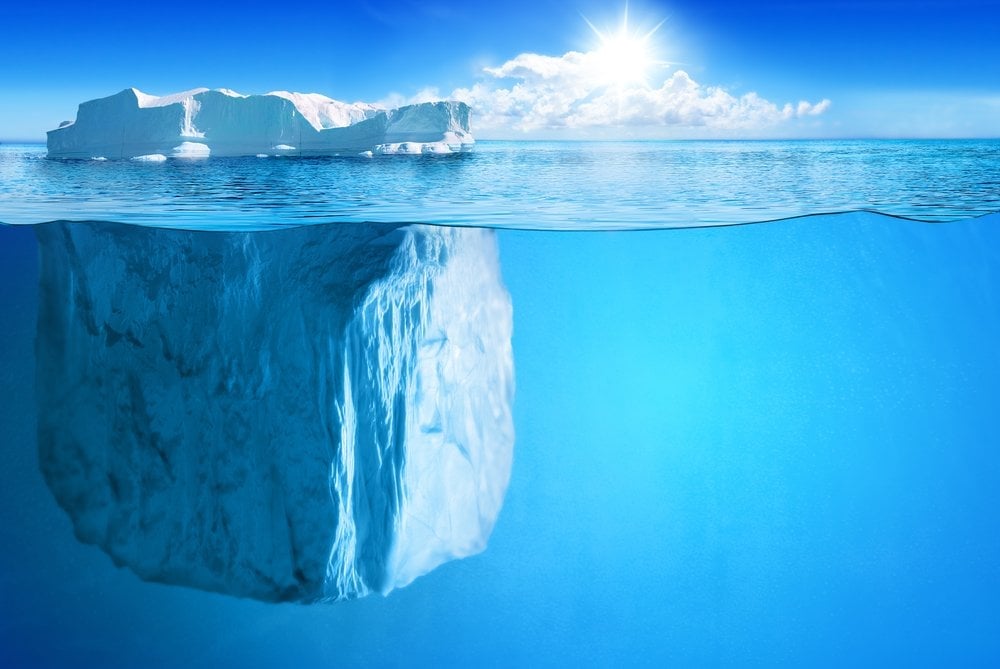 Melting of the Polar Ice Caps

The biggest chunk of land on our planet that is covered with ice is Antarctica, which houses 90% of the world’s ice and is the source of 70% of the freshwater on the planet. The layers of ice that cover the continent are around 7000 feet thick! Now, if all of that ice were to melt, then there would be a drastic and catastrophic rise in ocean levels – somewhere around 200 feet!

However, the good news is that the average temperature in Antarctica is -37 Degree Celsius; so there is no immediate danger of its ice melting anytime soon. A chunk of glacier breaking off (Credits: Bernhard Staehli/Shutterstock)

Other big chunks of ice are located at the South and North Pole, as well as Greenland. The ice at the North pole is not as thick as the ice at the South pole, and those layers of ice float above the surface of the Arctic Ocean. However, if all the ice of Greenland were to melt, there would be a rise in ocean levels by 20 feet!

The density of water changes based on temperature, and it has been found that water is at its densest at 4 Degrees Celsius (meaning that it occupies the least space with the same weight at a different temperature). Therefore, if seawater temperature increases continuously, then the density of water will decrease, as water molecules would expand and occupy more space, which would increase the levels of the oceans.

As it turns out, it is not just the polar ice caps and glaciers that are vulnerable to a global temperature increase; the biggest threat is the water already in the oceans. With that in mind, do everything you can to avoid polluting the environment. If you are careless with the resources and gifts of nature, then you will put yourself and future generations in hot water!

The short URL of the present article is: http://sciabc.us/Md0cQ
Help us make this article better
Prev Article Next Article
About the Author: