Remember the Whomping Willow from Harry Potter? It was described as a huge tree with waving magical branches that beat anything that came too close to them. What about the Piranha plants from Super Mario? Those were angry spiny plant biters, one of the many enemies in that perennially popular video game. These and many other fictional plants are portrayed as flesh-eating or poisonous.

Have you ever wondered where the idea of a monster plant came from? What if I told you that they already exist in our world? What are they called in the real world?

In the world of fiction, these frightening plants are biters or may be depicted as able to swallow a whole animal, but in the real world, these types of plants only eat small organisms like bugs, lizards, and flies. Any organism that eats flesh is called carnivorous. Some common examples are tigers, lions, and wolves. Any organism that eats insects is called insectivorous. Since these plants primarily eat insects, they are called insectivorous plants. Some of the most common examples are the Venus flytrap and pitcher plant.

Why are these so different from other plants?

To understand these plants, we first need to learn a bit more about the plant world. All around the world, humans have varied types of diets. Those living in colder climates tend to eat more meat and fat to keep warm, while those living in near-desert regions tend to eat dry fruits and dates because they prominently grow there. It can be concluded that an organism’s diet will match the available nutrition, as well as what is required for an organism to survive.

Similarly, insectivorous plants tend to grow in soils that do not have nitrogen. Nitrogen is an element that is crucial for living things. It is part of proteins, DNA in cells, and carbohydrates (sugar), all of which are important building blocks for life.

To fulfill their nitrogen requirement, these insectivorous plants have evolved alternate means of securing that critical element.

Why insects and not other animals?

10% of an insect’s body mass is made of nitrogen. Insects do not have bones or a skeleton to support its body, so how do they maintain their structure? An insect’s body is covered with a strong hard substance that composes a covering called an exoskeleton. The substance is called chitin. This chitin and all the other insect proteins are sources of nitrogen.

Compared to other animals with their respective body mass, insects have a higher nitrogen content in their bodies. This makes them an ideal target for these plants to fulfill their nutritional requirements.

Apart from that, some studies have proven that fungi can grow on dead insects. These fungi, when eaten by the insectivorous plants, will additionally help the plants’ roots convert unusable nitrogen into usable nitrogen from the soil. This theory is still comparatively new and requires more evidence. How do they attract their prey?

Now, with a clear target for their diet, the next step is to obtain it into its system, but how does it do that?

It is a given that plants cannot move. They must trap insects, but they cannot fly, nor do they have any net-like mechanisms like spiders to catch them. To do this, they have many different modifications. One amongst these is drawing the attention of insects and making them come towards the plant.

A flower’s nectar is a key source of food for insects and in their search for nectar, insects look for 2 key features of flowers: bright colors and a sweet smell. Insectivorous plants exploit this desire and present either of these features as bait. Some plants exhibit bright colors, such as red and shiny green, like the Venus flytrap, while other plants (i.e., pitcher plants) have a pot-like structure that contains sweet-smelling liquid. Can the insect escape?

Once an insect is caught, it is critically important that it does not escape. This is where the plant’s additional security comes in. The trap is more essential than the bait, and these plants have many different techniques to trap them. Let’s look at some of these tricky tactics!

Technique: There is a steep pot of liquid pooled at the bottom that drowns the insect and digests it after it dies. The pot also has an extra covering or a lid that closes after an insect is caught.

Technique: Here, the leaves are covered with a sticky gooey substance. An insect that lands on such a surface cannot free themselves and eventually dies.

Technique: The leaves are modified to resemble steel traps, with spines at the edge. They have very fine hairs on their surface and they trigger the leaves to snap shut when they are touched.

Technique: The trap is fashioned as a tube with hairs arranged in a spiral. The hair is downward-facing and forces the insect further down into the plant. How did these plants evolve?

All the plants we know of bring in nutrition from the soil and use sunlight and carbon dioxide to make their food through a method called Photosynthesis. So how did we get plants with such varied adaptations?

Normal plants produce chemicals called enzymes for various reasons. Of the several functions of a plant enzyme, one is to defend and protect the plant from bacteria and virus infections. These enzymes are coded for in the DNA of plants and are passed on through generations. It so happens that, over time, these codes for enzymes evolve to produce a larger variety of different enzymes.

One such enzyme is called chitinase. This enzyme digests the exoskeleton chitin of insects. This originally helped lesser evolved plants digest small fungi, which also have a coat of chitin. The same gene was repurposed for full-fledged carnivorous behavior.

One other proof of a repurposed plant function is absorption. Normal plants absorb from their roots alone, so the genes coded for this function are isolated near the root cells. However, in insectivorous plants, this function is found in the new leaves and modified parts that catch the insects. The insects once digested by the enzymes are then ingested via absorption.

Pineapples eat you as you eat them

The proof of modifying a pre-existing function to adapt to new uses is the basis of evolution. This also indicates that it might not be the end of these changes. Think about the last time you ate pineapple… after eating a lot, did your tongue sting? An enzyme called bromelain in the pineapple is meant to protect the plant from herbivores. Believe it or not, it digests our tongue as we digest the pineapple! This is only a small step towards full-blown plant carnivory, but we can see how such a transition could happen! This also means that someday. we might have animal-eating plants that can bite, beat or swallow us too—just like the monster plants in Super Mario!

Krithika P has completed an M.Sc. degree in Zoology from Madras Christian College, Tambaram. She has a BSc in Chemistry Botany and Zoology from St Joseph’s college, Bangalore. She is currently teaching high school kids. She loves to experiment; her lab in the school is one of her favourite places, closely followed by beaches and islands! She is a nature-friendly nerd and loves to nit-pick on all things biology. 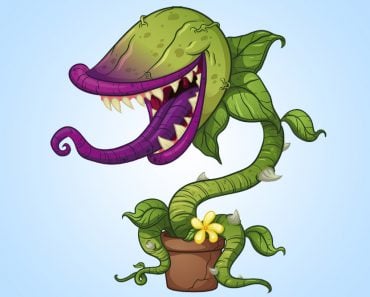