The cloud, a term that’s used interchangeably for either cloud computing or cloud storage, is used to signify a host of computing resources, ranging from ‘renting out’ infrastructure to providing access to select applications over the Internet on a pay-as-you-use basis.

I honestly admit that when I first heard the word ‘cloud’ in relation to storage devices and computers, I actually believed (don’t judge me) that they had developed some new technology that utilized the enormous potential of clouds – as in ‘physical’ clouds – to meet the ever-increasing demand of convenient and inexpensive storage devices. It would be fair to say that my line of thinking was not much different from this kid: 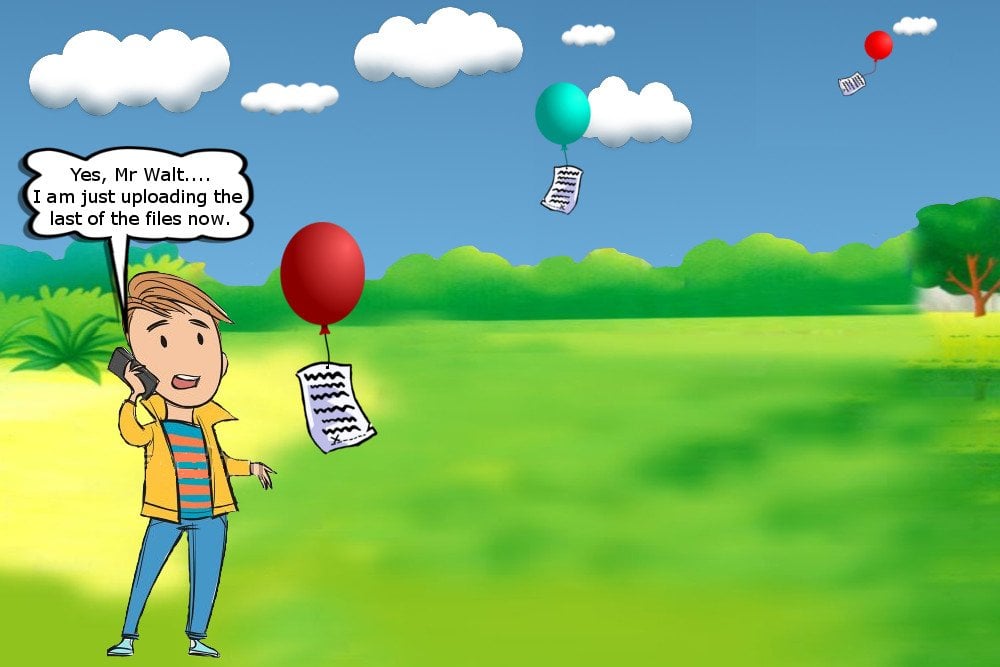 Besides the fact that a majority of today’s Internet users are connected to the ‘cloud’ in one way or another, a good part of that populace doesn’t even understand what ‘cloud storage’ or ‘cloud computing’ really means. So, what does ‘cloud’ really mean in the context of computer technology? And what’s with the weird name? Does it have any connection whatsoever with real, physical clouds, as in the ones that hang around in the sky?

What is ‘Cloud Computing’?

Cloud computing is an umbrella term that outlines an internet-based computing system consisting of a large number of computers and other devices, where a number of things, such as computer infrastructure, access to applications, software, processing power, etc. are shared over the Internet. 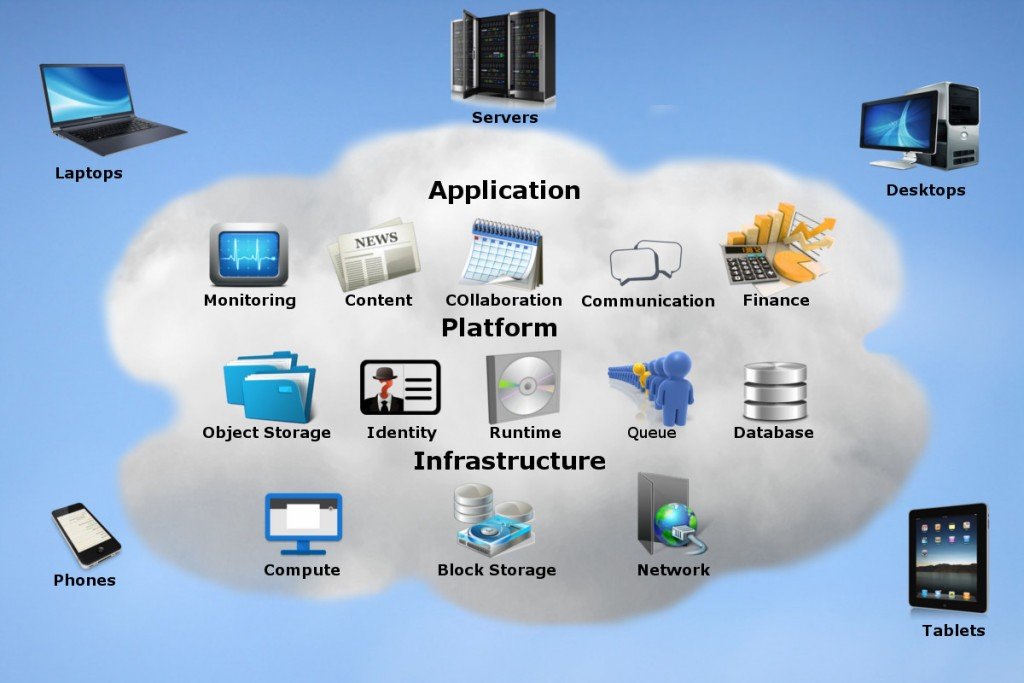 Practically the entire digital world, whether it’s a kid playing an online game on his gaming console or a series of tech professionals trying to create a messaging app, is connected to the cloud. Some of the biggest names in the digital world today, including Google, Facebook, Microsoft and Amazon, rely on cloud computing to keep their business running.

An example to understand cloud computing

Let me explain the concept of cloud computing with a simple example. Suppose you own a software company that employs a hundred people who make programs for businesses and corporations. Creating complex programs, quite understandably, requires a lot of resources and machines, including office space, power, networks, servers, computers, a huge number of storage devices and a giant cooling system to keep all the things in a server room from overheating. 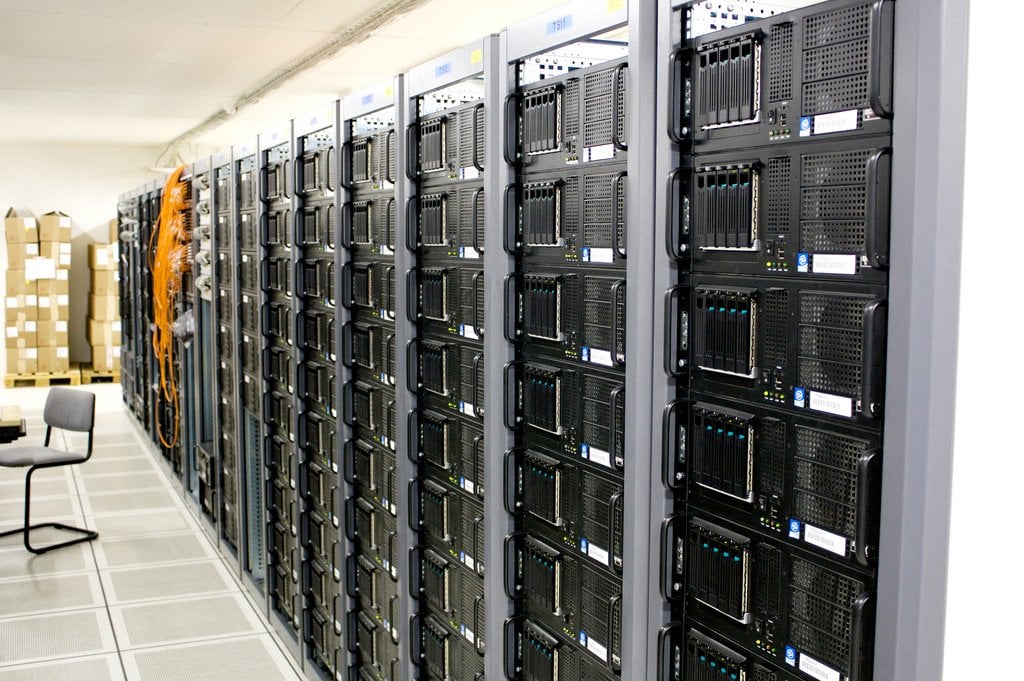 Server rooms are usually air conditioned and are devoted to the continuous operation of computer servers. (Image Source: Flickr)

In a world devoid of cloud computing, you would have to purchase a huge amount of computing infrastructure based on what you assumed your sales would be for a given year. You might even over-buy these computing resources, fearing an underestimation of your sales. Note that all these computing resources are quite expensive. However, as the owner, your expenses do not end there. After you acquire all these assets, you need a whole team of qualified professionals or experts to install, configure, test, run and maintain the entire setup.

Needless to say, setting up and running a software company in a world without cloud computing would burn a mountain-sized hole in your pocket. In fact, it’s highly unlikely that anyone could sustain a company on their own, provided they aren’t one of the richest people in the world. That’s why there were only a handful of IT companies (with the backing of wealthy investors) operating before the dawn of cloud computing.

Why is it called the ‘cloud’?

Thanks to its name, some people tend to think that cloud computing has something to do with actual clouds, but let me assure you, the two are in no way related.

Interestingly, a cloud symbol is often used to represent the Internet in technical diagrams and flowcharts. It’s speculated that this practice of denoting the Internet as a cloud led to the popularity of the term ‘cloud computing’. 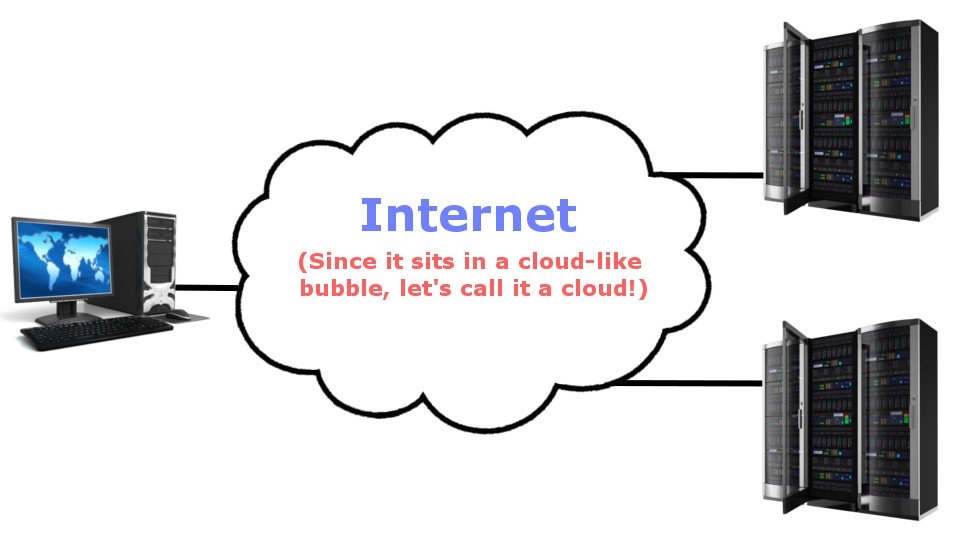 So, all you need to know here is that the term ‘cloud’ is used as a metaphor for the Internet and its ubiquity in the modern world. Just as clouds are everywhere, the resources and services in the cloud can also be accessed anywhere with an electronic device and an Internet connection.

What’s the difference between cloud computing and cloud storage?

You might hear the term ‘cloud storage’ a bit more frequently than ‘cloud computing’. Many people even use these terms interchangeably… but are they the same? 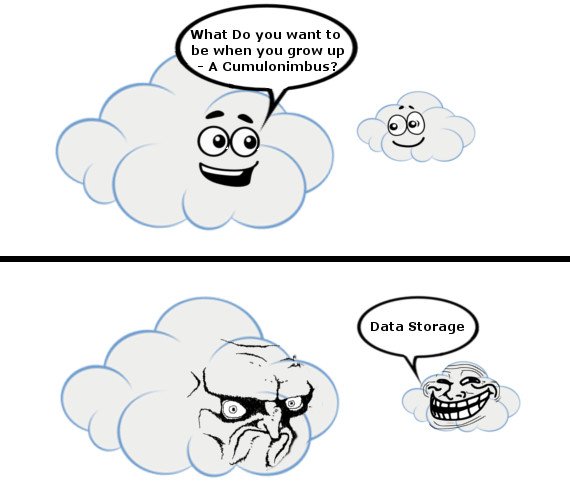 Cloud storage, as the name suggests, is a means of storing digital information. Think about it… what happens to a photo when you upload it to Facebook? Where does it go? It has to be saved somewhere, right? Or else, you would never be able to find it in the Photo album of your account.

To understand this, I have two words for you: data centers.

Anything you upload or run from the cloud (through products like Facebook and Google) gets stored on dedicated servers and storage volumes housed in huge warehouses. Multiple warehouses are usually located on humongous campuses called data centers. Big IT companies, like Google and Amazon, have numerous data centers all over the world where they store their customers’ data in countless hard drives. Here’s a short video showing the inside of one of Google’s many data centers in the US:

So, when you upload a file to the cloud, it can either be stored in a data center just a few miles from your house or in a distant location halfway across the world. You simply never know for sure! This way of storing data on remote data centers and accessing them at any time through the Internet is simply called cloud storage. Note that cloud storage is just a component of cloud computing, so it’s technically incorrect to use the two terms interchangeably.

As mentioned earlier, cloud computing is an umbrella term that encompasses a host of resources and services that are available through the Internet. Cloud computing can be divided into three broad categories (or service models):

Infrastructure as a Service (IaaS)

This is the most basic service model of the cloud. Under this, giant tech companies like Google and Amazon directly rent out tons of computing infrastructure to other companies or retail customers. Google Drive is a very good example of this, where an individual user makes use of IaaS by storing files on the Drive for free (up to a certain limit).

Platform as a Service (PaaS)

This is where ‘vendors’ offer a development platform to other companies according to their preferences and requirements. With this service model, application developers don’t need to worry about the cost of buying and maintaining the underlying software and hardware layers required for their program. Some famous PaaS providers include Amazon Web services, Microsoft Azure and Google App engine.

Software as a Service (SaaS)

Under this service model, clients directly use application software and databases offered by a service provider and pay for it according to their usage. This model is also referred to as “on-demand software”, due to its “pay-as-you-go” payment system. Notable players in SaaS include LinkedIn, Dropbox, Twitter, Outlook Web Access etc.

This has only been a basic outline of what cloud computing means and entails. If you want to explore more about its components, services, and how they work, you can check out the links provided below! 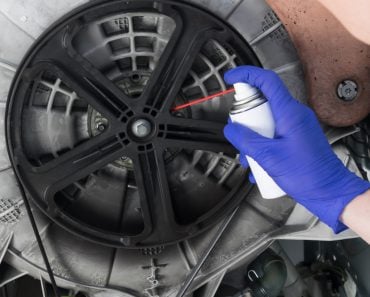