There are a few different theories as to why we age. One theory is that aging is a result of either innate senescence, or the wearing out of cells due to the accumulation of stress. Another theory is that aging is caused by telomere shortening. Telomeres are a stretch of DNA at the end of chromosomes that protect the DNA from fraying. Telomeres shorten as we age, which limits the number of cell divisions and leads to cell death.

Aging is inevitable – unless you are Jennifer Aniston or Captain America. The hallmarks of aging, such as grey hair, weak knees and the inability to keep up with the latest social norms are conventionally associated with biology. Which is justified, as these macroscopic symptoms seem to be fruits of a myriad of biological processes associated with the most widely accepted cause of aging — cell death.

Sir Peter Medawar, in his groundbreaking book An Unsolved Problem of Biology, provides two explanations for aging. Medawar’s book, one of the most important texts on the modern study of aging, claims that aging is a result of either:

Aging in the context of physics: Free Radical Theory

In physicist Peter Hoffman’s bestseller Life’s Ratchet, he “was focused on how life can create and sustain highly ordered systems in the presence of the surrounding molecular chaos.” He also explains that molecular “ratchets” extract order from chaos to do this.

According to Hoffman, complex organisms harvest complex chemical energy to divide up and create order, while releasing heat in the process. The random bombardment of water molecules on proteins could be the source of thermal energy that they absorb to sustain their structure.

The Second Law of Thermodynamics directs the creation of an organism, representing a huge increase in local order and organization, which converts low-entropy concentrated chemical energy for its biological functioning into high-entropy heat. The most successful organisms are then those that use energy effectively and dissipate it quickly.

However, thermal motion also randomly breaks protein bonds, which leaves them open to being oxidized. Researchers have found that even a single event of oxidation within these proteins is sufficient to unfold its normally curled up structure. This is also called the free radical theory, as atoms with unpaired electrons are called free radicals.

These atoms are very reactive and produce a domino effect, promulgating the production of more free radicals and damaging more cells following every reaction. As more and more waste is accumulated, a cell’s key systems become damaged. This includes mitochondrial damage, which marks the failure of energy sources for the machines and their corresponding processes. 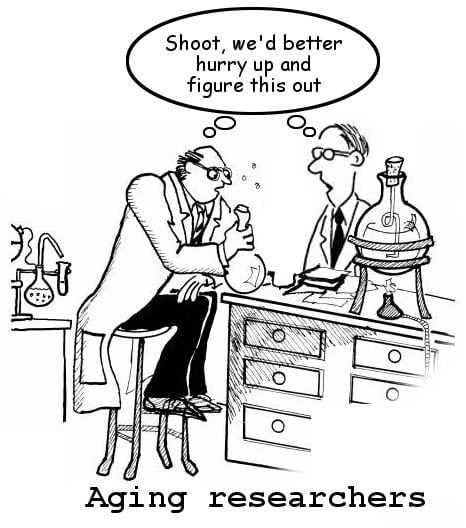 Additional losses due to interdependence lead to a cascade of failure. The scenario enacts a positive feedback loop, as the damaged functionality of machines prevents replication, so a cell dies without being replaced by a new one.

This coupled chemical and thermal degradation is popularly called inflammation and its apparent underlying cause – bond breaking – is linked to aging. Again, degradation can be further worsened by external causes, such as smoking or an unhealthy lifestyle.

Aging in the context of biology: Telomere Shortening

As much as entropy and the second law of thermodynamics might explain why cells, and by extension the whole organism, age, it isn’t the whole story. The different lifespans that one observes between different species tells us that there is some innate clock controlling how long we live.

A brown rat’s life lasts for 2 years on average. An African forest elephant can live up to 60 to 70 years. The average lifespan of a bluefin tuna is 15 years. Humans live 79 years. All these animals, though made up of mostly the same stuff, cells, proteins and DNA all live for different durations of time. Why would different organisms have different lifespans? This seems to imply that there might be an innate expiry date for each species. If that is the case, then what is this ‘innateness’ in life’s biology? The beginnings of an answer emerged in the 1980s when Elizabeth Blackburn discovered telomeres and telomerase.

DNA replication isn’t a perfect process. The DNA replication machinery, like any machine, is bound to have some defects that cannot always be fixed. Due to the way it works, each time DNA is replicated, some parts of its end are lost. With every round of cell division, more DNA from its ends are lost. This is a dangerous loss of information. To combat this, nature came up with telomeres.

Telomeres are a long stretch of DNA at the end of a chromosome made up of a repeating sequence of nucleotides. They are like the little plastic coverings, aglets, on shoelaces; they prevent one’s DNA from fraying at the edges. The human telomere nucleotide sequence is TTAGGG and can be repeated about 3000 times.

Since telomeres don’t hold any information on how to make a protein or RNAs, the cell doesn’t lose anything. But telomeres don’t last forever, ultimately limiting the number of cell divisions to whenever the cell loses all its telomere. Once the cell hits this limit, it can no longer divide faithfully, as is destined for cell death.

But some cells have a special enzyme that can rebuild telomeres when it performs DNA replication. This enzyme is called telomerase. Telomerase is found in gametes, zygotes and stem cells. Discovered by Elizabeth Blackburn and her lab in the 1980s, it solved the problem of how cells like gametes and zygotes maintain their DNA and telomeres until the organism is old enough. Telomerase gives stem cells the ability to divide without limit. Telomerase’s presence and activity has also been connected to the apparent agelessness of certain other animals like the naked mole rat and a jellyfish Turritopsis Dohrni.

Telomere length gets shorter as an organism gets older. A newborn human’s cells have 8,000 base pairs of telomeres, while an adult human has 3,000, and elderly people have 1,500. Recent research suggests that the rate at which telomeres shorten might dictate the maximum of a species. This suggests that telomeres dictate how long an organism can live up to.

2) The genes that control your age

Though telomeres and telomerase give us much information on the lifespan limits of organisms, scientists still aren’t sure if this is a symptom of ageing like white hair and wrinkles, or it is the cause of ageing. But there is another line of evidence that shows that there is more to ageing than telomere shortening.

In 1993, Cynthia Kenyon and her colleagues published a paper in Nature titled, ‘A C. elegan mutant that lives twice as long as wild type’. In their paper they describe how a mutation in the gene daf-2 extends the lifespan of this measly 1mm nematode from 3 weeks (about 30 days) to a month. When they compared a normal wild type 3 week old worm with the mutated one of the same age, the mutated worm was an active, healthy worm, slithering about. The wild type looked like it was ready to enter into an elderly home.

The mutated daf-2 gene made its protein, Daf-2, non-functional. This protein is a cellular receptor, detecting the presence of various proteins outside the cell relating to the worm’s insulin metabolism. The mutated Daf-2 could no longer bind. The lack of anything binding to Daf-2 started a molecular Chinese whispers that ultimately led to the activation of a certain molecule called Daf-16. It is Daf-16’s job to go to the DNA and switch on certain genes for protein production. The genes Daf-16 turns on were those that helped the cell combat oxidative stress, DNA damage, and repair. This boosts the cell’s health and overall, the whole organism’s allowing it to live longer.

This isn’t only for the worms. Researchers have found this in mammals as well, humans included. The gene name changes from daf-2 to IGF (Insulin growth factor), but more of the basics remain the same. People with certain mutations in the IGF gene are shown to have longer lives.

Around the same time, another gene was showing its anti-ageing properties. Sirtuins are genes whose protein products are involved in DNA repair, DNA recombination, chromosomal stability, and longevity. Researcher David Sinclair at Harvard University is the ultimate sirtuins champion. His lab has been looking at how ageing is influenced by sirtuins through our caloric intake. There is a growing body of research showing how modulating sirtuin genes can change one’s lifespan.

So, what’s the right answer?

There are two camps that support either theory on ageing as the “correct answer”. Some say the physics wins since entropy is an all-encompassing universal law. It directly draws us a possible cause, rather than a correlation. Clipped telomeres are linked with cell death, but small-scale physics, which governs the formation of bonds, provides us with a sharp microscope and a scalpel that can pierce through the layers of the cell and shed light on its various internal wounds.

The link between thermal motion and aging becomes even more convincing when we consider an experiment on roundworms subjected to various internal temperatures.

According to Leonard Hayflick, the original discoverer of cellular aging, “the common denominator that underlies all modern theories of aging is change in molecular structure and hence functioning.” He believes that the ultimate cause is “the increasing loss of molecular fidelity or increasing molecular disorder.”

But, solely looking at ageing through the lens of entropy is simplistic. It doesn’t tell us nearly enough about how and why organisms age the way we do. Though the physics might explain the inevitability of death, but it doesn’t explain how cells such as those of the germline can divide countless times while maintaining their cellular integrity despite violent molecule clashes and environmental assaults.

The Hayflick limit is only a suggestion of a limit. There are cell lines, such as HeLa that haven’t aged yet (granted that they are cancer cells). Stem cell lines grown in labs under specific conditions can surpass the Hayflick limits, dividing freely, letting their telomerase extend their ages and DNAs. The fact that altering a single gene can double a worm’s lifespan indicates that biology plays a hefty role in ageing.

So why is it inevitable?

We are bound to lose, because the game is played out under the rules of probability. It is erratically random and the collapse of bonds occurs at different times for different people. In other words, even if the technology catches up and immortality seems to be mouthwateringly close with the help of gene editing, nanotechnology or stem cell research, we still might fail miserably.

First, because it is an overwhelmingly complex prospect, and secondly, due to the probabilistic nature of molecular breakdown. The prevention of a particular molecular structure’s breakdown doesn’t necessarily prevent aging, as there are other structures that might fail instead.

The human lifespan has increased monumentally since the early 15th century, when the average person lived no more than 30 years. Today, our life span is almost 71 years. The major reason is our collective realization of polluted environments and the eradication of deadly diseases that they propagated. We improved sewer facilities, generated clean water, provided excellent medical facilities, designed great diets and optimized health care.

Even so, all these efforts might be in vain. Although life spans can be increased, death still seems inevitable. As Peter Hoffman says, “we will never defeat the laws of nature.”