Our DNA holds the key to a vast number of unsolved puzzles that continue to haunt researchers. This ranges from simple things like the color of our eyes, to much more complex things like cystic fibrosis. Since scientists first discovered the concept of DNA, they have been trying to manipulate it for the betterment of mankind. DNA manipulation opens a whole new world to us, literally, since we will be able to create what we want, precisely how we want it. Scientists have come up with numerous ideas and methods for DNA manipulation, which is commonly know as genome editing.

CRISPR technology is a form of genome editing, among others like zinc finger nucleases, engineered meganucleases, etc. It was derived from bacteria that employed this technique to protect themselves from the attack of viruses. As we know, all organisms have genetic material in the form of DNA or RNA. Any damage to this genetic material leads to major consequences. Using this, bacteria derived, or rather, posses a method to protect themselves.

Bacterial DNA has sections known as Clustered Regularly Interspaced Short Palindromic Repeats (a long name, I know!) Palindromic sections are short nucleotide sequences that are repeated over and over again. These are interspersed with tiny segments of DNA known as spacer DNA. This spacer DNA is derived from viruses that attack the bacteria. When the same or a similar virus attacks, the spacer DNA, or the viral DNA, gets transcribed to form RNA known as crRNA. The cells have a protein known as Cas9. This protien is an enzyme, which can act as a pair of molecular scissors. Guided by he crRNA, the Cas 9 protein cuts the viral RNA or DNA, thus rendering it useless.

Basically, the bacteria store a part of the viral DNA for future reference. When they encounter a similar virus, the stored viral DNA acts as a template or guide, and the bacteria use it to destroy the new viral DNA. This mechanism provides an efficient protective mechanism against the attack of viruses. Obviously, with such deadly mechanisms, come safeguards. Safety protocols are there to ensure that the Cas9 protein only cuts the desired portion o the viral DNA. These come in the form of markers, to ensure that it doesn’t cut the CRISPR DNA or the wrong part of the viral DNA. 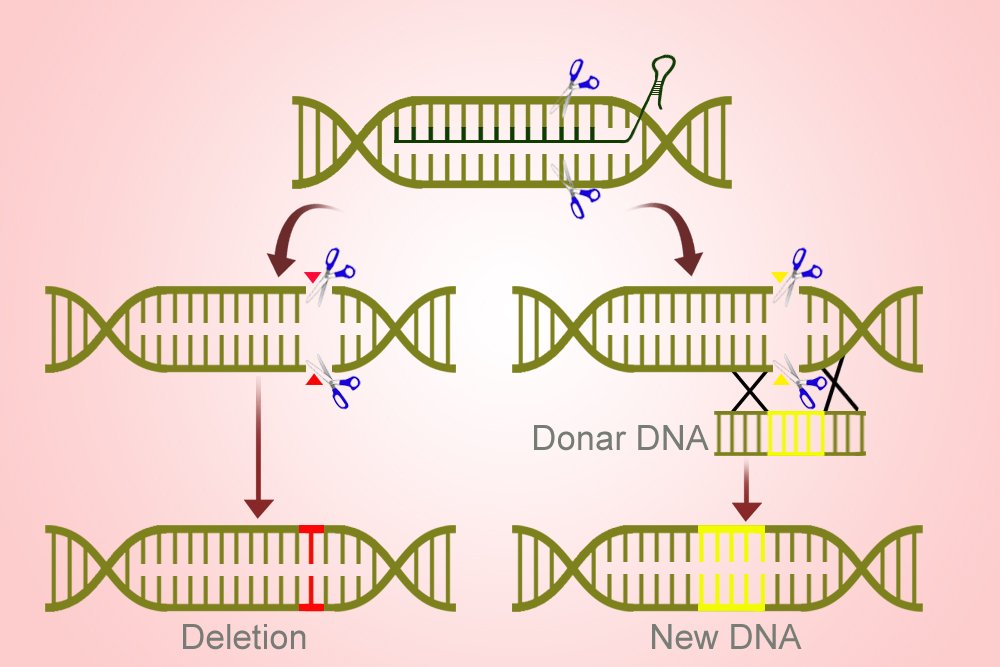 CISPPR is technically just the protective mechanism of the bacterial cell. Using that technique is better referred to as the CRISPR technology. This mechanism has been used as a method for genome editing in animals. Genome editing can have some pretty major, long lasting and relief causing effects. Scientists have used the technique to remove harmful DNA from an individual by simply providing similar sequences and stimulatiog the enzymes to remove that segment. Once a part of the DNA is cut, the cell uses its natural DNA repair mechanism to fix the damaged DNA. However, this process is not error-free. Scientists, therefore, often use this to introduce a segment that they wish to inculcate in the cell’s DNA. After they carry out the process of cutting the cell’s DNA, they introduce the desired DNA segment. This introduced segment is taken up by the cell as a template, and it proceeds to correct the damaged DNA using the provided template, thereby introducing a desired sequence of base pairs.

While CRISPR technology presents itself as the solution to a number of problems, disorders and diseases, its ethical concerns cannot be disregarded. When changes are brought about in somatic cells, which are the cells apart from sperm and egg cells, the changes are limited to that individual and to the altered tissues, or to organs alone. However, when these changes are induced in egg or sperm cells, they will be transferred from generation to generation. This raises major concerns, as it involves affecting all future generations. On ethical grounds, this is a decision that cannot be made lightly by doctors. Every involved individual should get a say in the removal or insertion of genes in their genetic code.