Home
Humans
How Does The Ketogenic Diet Work?

The ketogenic diet works by shifting the body from using glucose as an energy source to using fats instead. Burning fats produces chemicals called ketone bodies, which are another source of energy, although slightly different than traditional carbs.

There seems to be a new diet fad sweeping the nation every day. Some swear by the benefits of the Paleo diet, while others are convinced that banishing all forms of grains will reform your life. However, in the last 3 years, I’ve increasingly come across claims that the keto diet will change your life. The claims made regarding the keto diet range from shedding weight fast and gaining muscle to “feeling” better and being more “awake”. With all these bold claims flying around, an important question arises… where did this diet come from and what exactly does it do in your body? 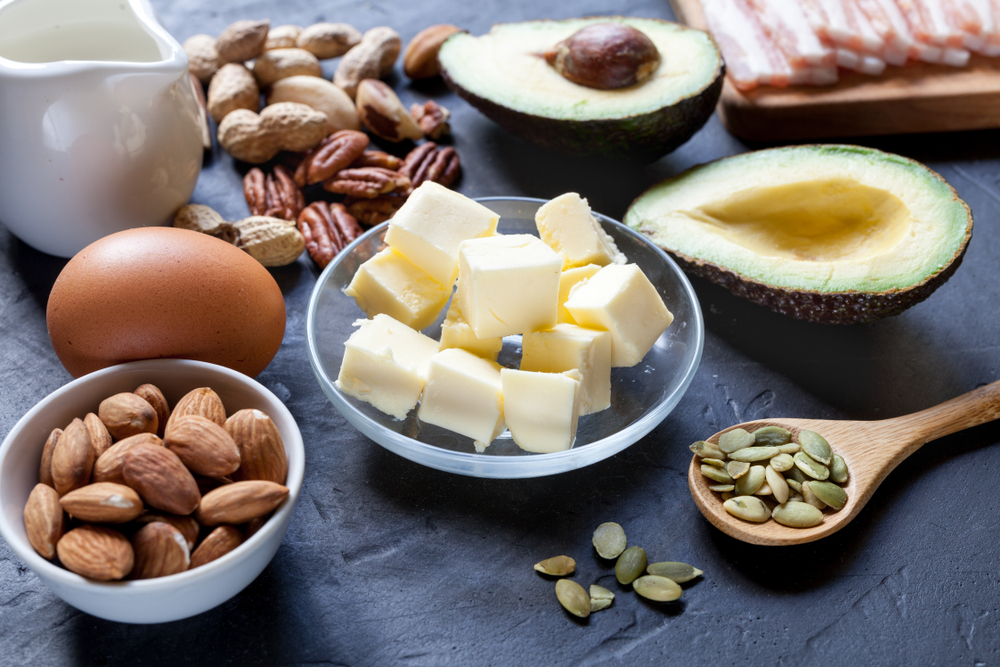 The ketogenic diet allows foods that are high in fat and protein, but low in carbohydrates. The above picture shows some of the food allowed on the diet. (Photo Credit : JoyStudio/ Shutterstock)

Where did the ketogenic diet come from?

The ketogenic diet has actually been around for a long time, since around the start of the 20th century. It was developed in 1921 by Dr. Russell Wilder, who coined the name, as a treatment for epilepsy. Doctors had noticed that the frequency of seizures dropped when epileptic children were fasting. The ketogenic diet was a way for doctors to stimulate fasting in their patients without actually starving them.

For about a decade, the ketogenic diet was a mainstay in epilepsy treatment, at least until 1938. In 1938, two doctors, Tracy Putnam and H. Houston Merritt, discovered that a chemical called diphenylhydantoin was effective in treating the seizures of epileptic patients. The success of phenytoin, as it came to be popularly known, caused a domino effect and a host of new anti-epileptic drugs were discovered. The medical community believed that these drugs were the way forward in treating the disease, which slowly pushed the ketogenic diet from people’s minds.

It was largely forgotten until the start of the 21st century. Obesity rates were higher than ever in America and it was clear that the low-fat diet everyone praised wasn’t working all that well. In the background of this ‘fat makes you fat’ campaign, there were a few dissident voices asserting that it was actually the sugars making us fat. The media soon picked up on this and published articles like, ‘What if it’s all been a big fat lie?’ by Gary Taubes, published by the New York Times in 2002, which called into question what we thought we knew about what fats and sugars actually did in the body.

What is the ketogenic diet?

Around this time, people started to look at the alternate evidence. Opposers to carbs like Dr. Atkins and his famous Atkin’s ketogenic diet started to gain attention. The claim being made by the “other side” was that eating lots of carbohydrates is what was actually making everyone fat. What they suggested instead was eating a low-carb diet; in other words, eat more fat to lose the fat.

The ketogenic diet (a low-carb, high-fat diet) recommends eating more fats and proteins than carbohydrates (sugars). This is calculated as the ratio of fats to carbs and proteins. This ratio is called the macronutrient ratio. The classic ketogenic diet developed in 1921 suggested a macronutrient ratio of 4:1, but since then, doctors have modified the diet to make it less restrictive.

At face value, the ketogenic diet sounds counter-intuitive… How can eating more fat make you less fat? The answer lies in the different ways that the body processes carbohydrates and fats.

Biochemistry of the ketogenic diet

Under completely normal conditions, the body prefers carbohydrates or sugars, specifically glucose, as its primary energy source. Organs like the brain and the eyes almost exclusively use glucose for energy needs. All starchy and sweet foods like pasta, bread and even fruits provide the body with tons of glucose.

Immediately after a meal, the blood has tons of glucose in it and the blood sugar level is high. This high blood sugar signals the pancreas to secrete insulin. Insulin is necessary for most organs (except a few, like the brain) to start using the abundant glucose. Once all the glucose is used up—both free glucose and that acquired from glycogen, the stored form of glucose—the body switches over to using fat.

Fats stored in adipose tissue are transported through the blood to the liver. In the liver, fats—or more accurately, fatty acids—are broken down into smaller molecules called acetyl-CoA. These acetyl-CoA molecules then enter the citric cycle, which produces the majority of energy in the body. Even glucose, when broken down, eventually forms acetyl-CoA.

A flow chart of how ketosis is achieved. Acetyl-CoA increases in the liver because of fat breakdown. This excess acetyl-CoA combines and forms ketone bodies. (Photo Credit : kanyanat wongsa/ Shutterstock)

However, the shift from sugars to fat isn’t a sharp line. The liver and kidneys ensure that the body always has a minimum amount of glucose so organs like the brain and muscles always have enough. The liver and kidneys can actually start making glucose from other chemicals through a process known as gluconeogenesis (gluco = glucose, neo=new, genesis=birth/formation).

The excess acetyl-CoA combine with each other to form ketone bodies, such as acetone, acetoacetate, and beta-hydroxybutyrate. Ketone bodies are an alternative source of energy for the body when glucose is not available. They get transported from the liver to other tissues to be used; in fact, ketones are the only other chemical the brain uses for energy. When ketones are produced, the body is said to be in a state of ketosis. 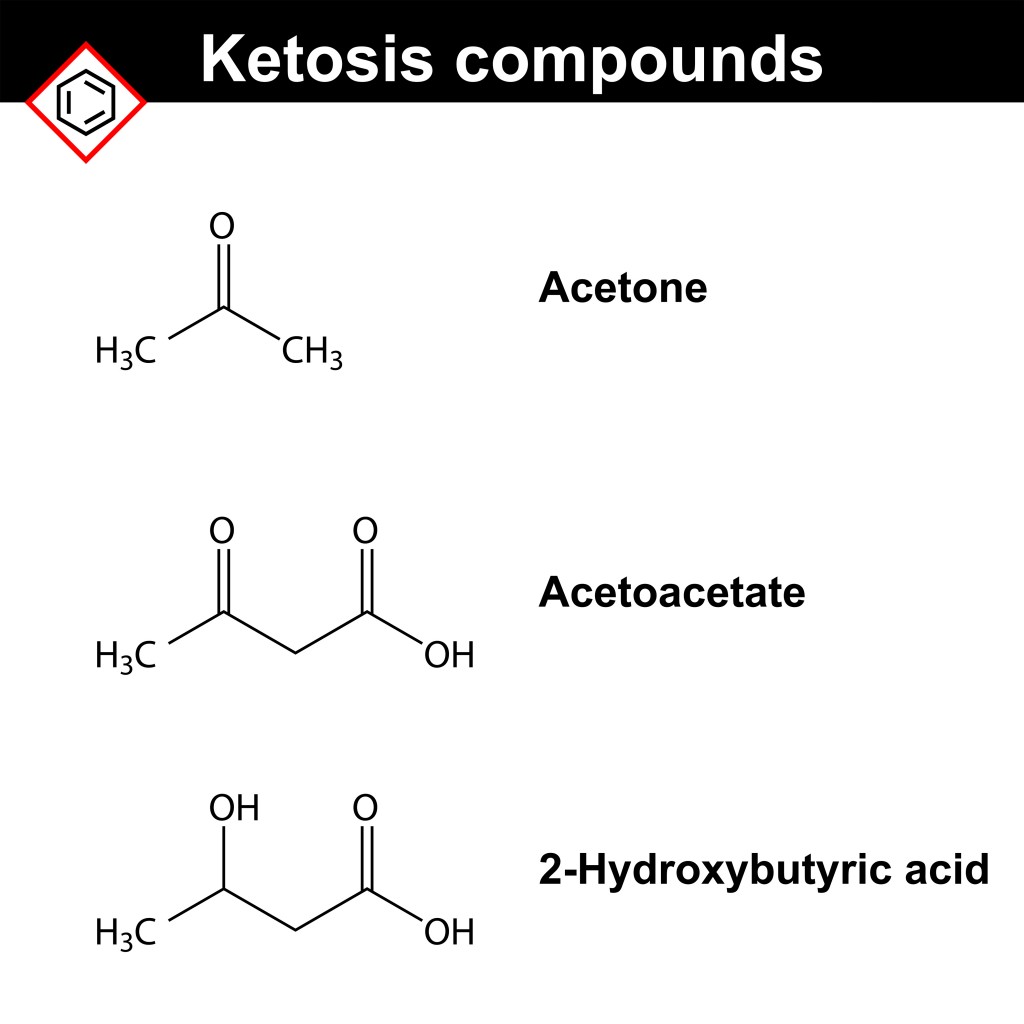 The three different ketones produced when the body is in ketosis. (Photo Credit : chromatos/ Shutterstock)

Keeping the body in ketosis is what a ketogenic diet targets. To maintain ketosis, just enough sugar is allowed to force the body to continue burning its fat reserves. This is similar to what happens during starvation, and would explain why the keto diet worked in the same way as fasting as a treatment for epilepsy. However, this doesn’t answer an important question—why doesn’t the body store all this fat?

Insulin is the simple answer. Insulin promotes sugars to be converted to fats, and leads to fats being stored in adipose tissues. Very little glucose is stored as glycogen in the body. What does the body do with excess glucose when it doesn’t need it? It turns it into fat. Do you remember that even glucose forms acetyl-coA? That same acetyl-CoA is used to make fat. The keto diet keeps insulin levels low, which tells the body that glucose is low, so it doesn’t store any fat. Et voila, you continue to burn fat.

Although the ketogenic diet does sound like a miracle diet from the simple biochemistry above, there are some caveats that are critical to understand. Nutritional biochemistry is complex and the above picture only depicts what we know for sure. There is a whole world of hormones controlling these processes and we don’t yet know how the ketogenic diet affects each of them. Hormones like insulin, leptin, ghrelin, GLP-1 and more all interact with each other to affect our metabolism. In the short term, the ketogenic diet does show more weight loss success than a low-fat diet, but how the diet will affect a person over the long term hasn’t been studied yet.

Furthermore, there is a fine line to maintaining ketosis. Ketosis is normal, but it does cause what is commonly known as the ‘keto flu’. That also might be due to the body adjusting to using ketones as fuel. However, if excess ketones build up, it can lead to ketoacidosis. Ketoacidosis is when the blood becomes very acidic, which can hamper the proper functioning of vital organs. This is why it’s best to get the advice of a nutritionist before going on any diet. Only a trained professional will actually get you the best results. Ultimately, any diet will work as well as your lifestyle and genetics will allow!

The short URL of the present article is: http://sciabc.us/ruyfK
Help us make this article better
Prev Article Next Article
About the Author: 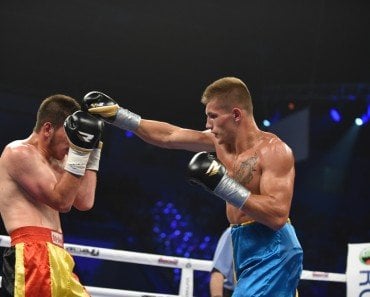