There are genetic factors that make some people more likely to be entrepreneurs than others. Gene varients that are linked to entrepreneurship make people who have them more likely to take risks and be self-employed. These genes are linked to the receptors of the neurotrasmitters dopamine and serotonin. But, environment plays a significant role in career and life choices.

As you likely know, if you want to start any business, you have to take risks; “no risk, no reward!” as the saying goes. For some people the high stakes of business and the hustle is exciting. They seem to be naturals when it comes to business, and they revel in that pursuit of success.

What if I told you that entrepreneurship might be genetic? Wouldn’t you like to know if you had the genes to become the next big business tycoon?

Over the past three to four decades, there has been plenty of research to suggest that there could be a genetic basis for entrepreneurship.

Genes are strings of DNA that pass from parents to children, from generation to generation. They determine traits like how tall and strong you can get, as well as the color of your hair and eyes. In fact, they’re responsible for most of our characteristics, including certain facets of our personality, such as risk-taking behavior and intelligence. Similarly, some scientists are interested in identifying genes that might push people into business.

Before we jump into which particular genes are linked to business-minded people, it’s important to remember that no single gene is directly responsible for a trait as complex as making someone choose entrepreneurship. As you can imagine, it’s slightly more complicated than that. There is a combination of direct and indirect factors that influence people to enter the world of entrepreneurship. Along with genetics, environment (like your upbringing) and luck might also push people try out business.

Additionally, the logistics of actually starting a business are complicated. First, thinking of an idea that can be monetized is challenging in itself. Second, one must have enough capital to fund the venture. And third, the circumstances need to be right for your business to start and flourish. Not to mention, life can always throw challenges at you, such as a pandemic or a natural disaster, but those are more extreme situations.

Genes can make us take risks in search of rewards

Genes code for proteins, which perform countless functions in the body. Thus, any genetic mutation (changes in the genes) can lead to differences in the proteins that are produced, which might affect their function in the body.

Both of these neurotransmitters are crucial to the decision-making process. For example, when we do something rewarding, our brain releases dopamine, causing us to feel happy or proud. These positive emotions drive us to continue to search for more ways to reward ourselves with such feelings. Such reward-associated genes belong to the Dopamine Receptor (DRD) gene group.

If these genes are mutated in some way, the receptors they code for will be slightly different as well, which may affect the chemical pathways and mechanisms in the brain, leading to different bodily reactions. Such modified pathways can incline people to engage in entrepreneurial activity.

For example, a variant form of DRD2, a gene that affects feelings of pleasure in response to risk-taking, could influence people to engage in the high-risk activity of entrepreneurship. Why? Quite simply, because they get more pleasure from doing so!

Another study published in PlosONE focused on analyzing the variant forms of two genes: 5-HTTLPR and DRD4.

Similar results were seen for the DRD4 gene, which also has short and long forms. According to the study, people with longer forms of the DRD4 gene take 25% more financial risks, and we all know the mark of a good entrepreneur—the ability to take smart and calculated risks. 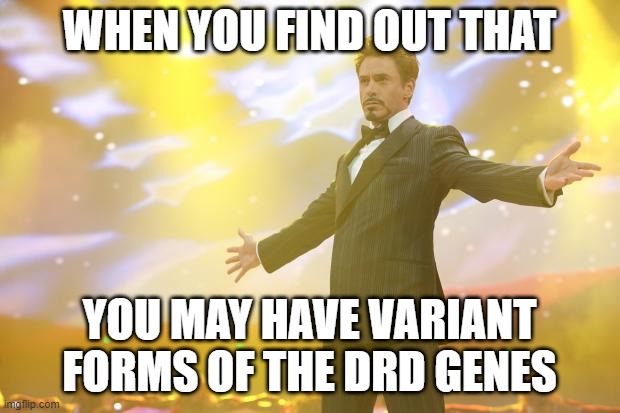 Second, as mentioned previously, entrepreneurs are often extroverts. Again, while this is a complex personality characteristic for a single gene, it is important to consider, as entrepreneurs are required to convince or sell themselves to customers so they purchase a good or service. One variant of DRD4, a gene that influences the novelty-seeking behavior of people, can affect the tendency of an individual to become an entrepreneur.

Genes regulate the way we function in our environment

A third factor that might predict entrepreneurial ability is gene-environment correlation. This influences environmental experiences and performances, as genes can lead people to pick their environment. For example, smarter students may select tougher classes in school or college to further increase their knowledge. Such factors will influence people to select activities and environments geared towards entrepreneurship, such as deeper study, gaining specific skill sets or higher education.

There is a related term known as gene-environment interaction, where genetic factors make a person with a particular gene respond more strongly to an environmental stimulus. For example, people with a variant of the DRD4 gene may automatically notice information related to business opportunities quicker than those without that variant. 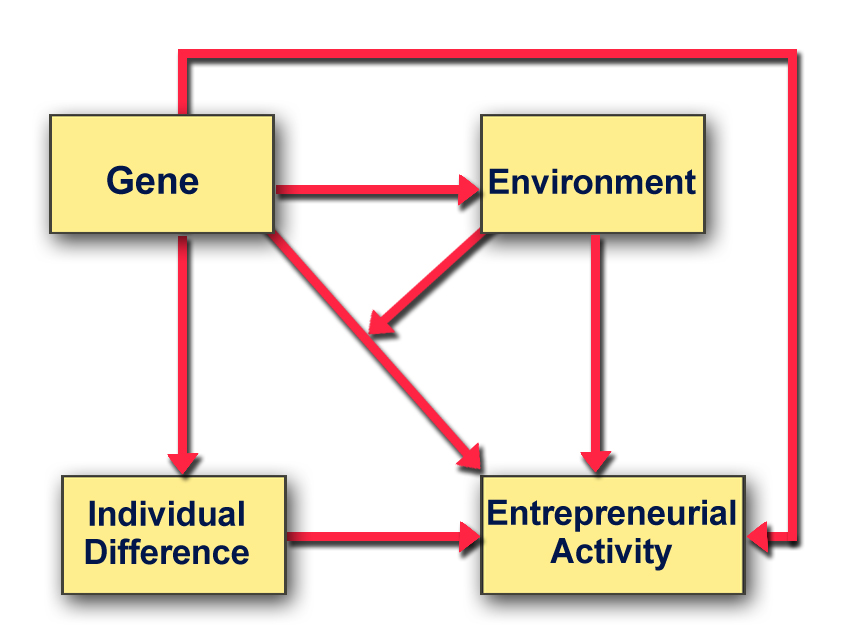 A schematic that shows how genes influence entrepreneurship.

Genes push people to be self-employed

A very recent study found that people who are genetically inclined to require more income to live happier lives may be pushed towards entrepreneurship to earn more. This study discovered that people could possess genes that regulate their attraction to being self-employed and earning more money. Such genes basically give people motivation to be entrepreneurs.

Any study related to the functioning of genes must be very detailed, specific and done on a fairly large scale. The last requirement is the main reason why there is no solid proof of specific genes related to entrepreneurship. There is only superficial evidence, in the form of small sample studies, which suggests entrepreneurship could be genetic.

Furthermore, an individual’s environment also heavily contributes to their ability to be an entrepreneur, but that’s a topic for another time. To top this all off, it is extremely hard to quantify exactly how genes make the next business genius out of an otherwise normal person. Perhaps with further research and studies that are larger in scale, science will be able to figure out which specific genes affect entrepreneurial ability, and how exactly they do it! 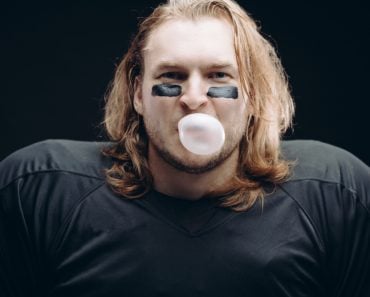