Honey is nectar that is converted through enzymes and evaporation into honey, primarily inside the bee’s digestive system, before being deposited in a honey comb.

Anything golden or sweet tantalizes our brains, and honey has both of these qualities. Heaven, according to the Christian bible, is “The Land of Milk and Honey”, hinting at honey’s revered status. Even earlier, many ancient cultures considered honey to be an elite food. From the Greeks and Romans in Europe to China in the East and everything in between, people have valued honey not only for its sweetness, but also for its healing properties. Hippocrates, the outstanding Greek physician (of Hippocratic Oath fame) often recommended honey-based remedies for digestive ailments. It’s remarkable that this fluid, once considered divine, is made by the humble bee. The question is, how do these small insects make honey? 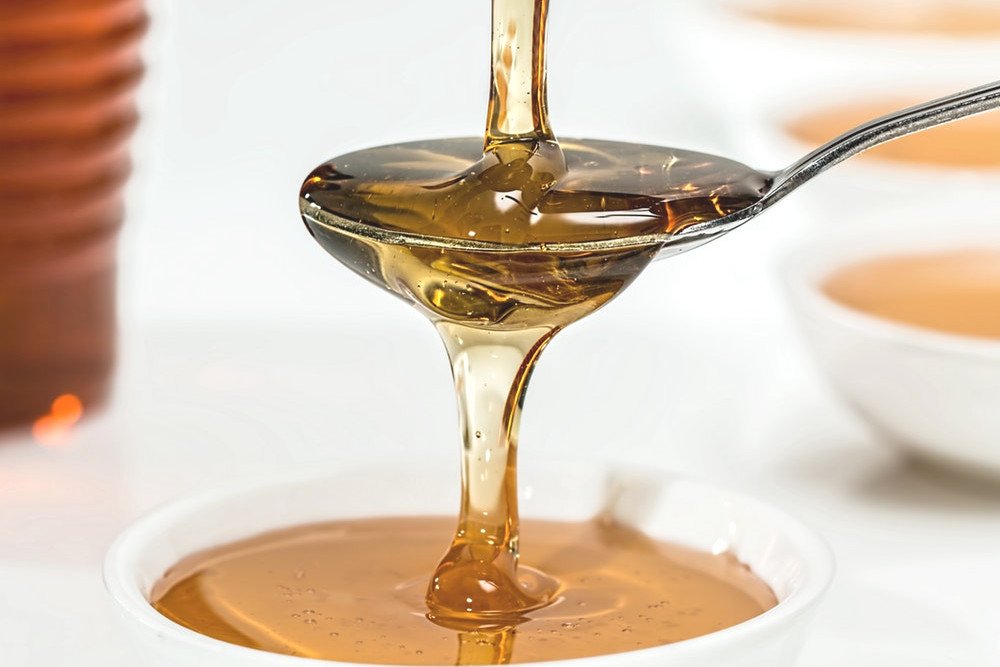 Honey has been important parts of our cultures and our diets for centuries (Photo Credit: Pexels)

Those honeybees that produce honey exist in a eusocial colony. This means that there is one queen that reproduces, while her offspring—the majority of whom are her daughters—are worker bees that maintain the hive, rear their sisters and brothers, but don’t reproduce themselves. A single colony can have anywhere between 50,000-70,000 bees.

The female worker bees do all the work around the colony: rearing the young, building, maintaining and protecting the hive, and going out to forage for food. They search for flowers from which they can extract pollen and nectar, two things that bees absolutely adore. They suck the nectar from the flower through their mouthparts, while pouches in their posterior-most pair of legs, called pollen sacs, are used to store pollen, as the name suggests.

Out of these two, it is the plant’s nectar that leads to the honey. Each worker bee collects close to one teaspoon of nectar, and about a half kilogram of honey requires close to 1.8 kilograms of nectar!

Worker bees are the workforce that goes to collect food, care for the young, and make honey (Photo Credit : Public Domain Pictures)

Once the forager bee—the worker bee that goes to search for food—comes back to the hive with a fresh supply of nectar and pollen, it passes the food supplies to the receiver bee, a worker bee that hasn’t gone to forage. This receiver bee isn’t old enough to go out foraging yet, since worker bees begin their foraging duties after they turn 20 days old. A worker bee’s entire lifetime can span up to 50 days, shortened significantly by going on the dangerous adventure that is foraging. The worker bee keeps the nectar in a special organ called the honeybee bladder. The forager will open its mouth and produce the nectar it collected, which the receiver will now ingest. This ingestion is important because while inside the bee, the nectar isn’t digested. Instead, the bees will secrete enzymes from its glands (the hypopharyngeal gland), which begin to change the chemical composition of the nectar. 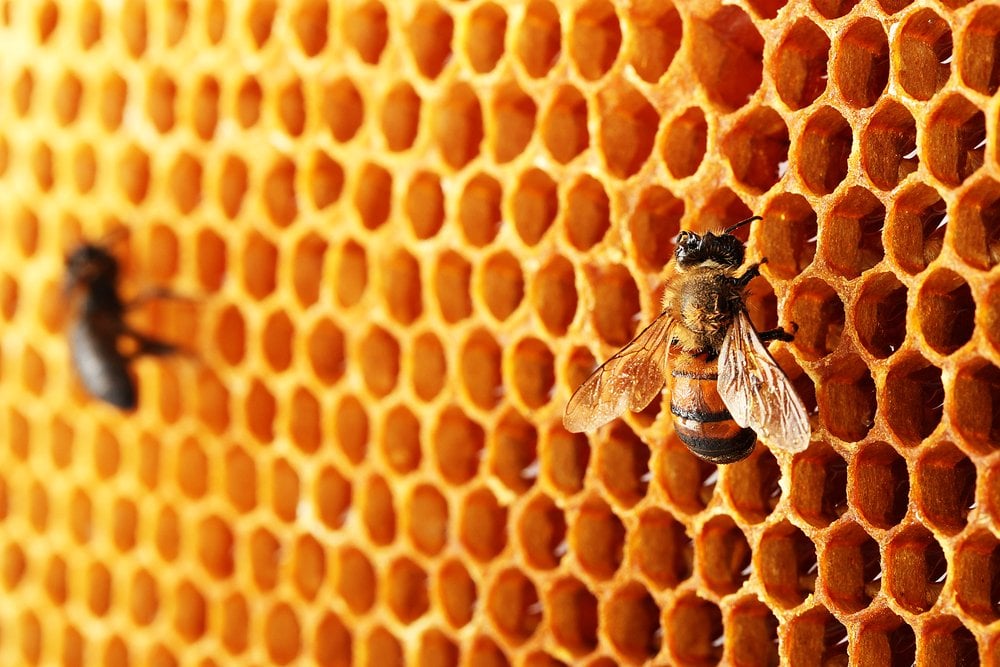 The workers add enzymes to the nectar while it is in the bee’s digestive system. These enzymes eventually convert the nectar into honey (Credits:Africa Studio/Shutterstock)

A honeybee worker produces many enzymes that break down larger sugar molecules into glucose and fructose, as well as enzymes that help destroy bacteria, like catalase. These numerous enzymes are the reason that nectar turns into honey. Each time a worker passes the nectar mixture on to another worker (this can happen several times), the new worker adds more enzymes from its own glands until, finally, the last worker deposits this pre-honey into one of the cells of the hive. Here the honey will mature further.

Another key characteristic of honey is its extremely low water content. Most of the water is removed while the bees are processing the honey in their guts (about 40%) while the rest (about 20%) evaporates in the hive cells. In this process, between 20-70% of water is lost.

The final honey product is composed of 17-20% water, 76-80% glucose, fructose, pollen, wax, and other mineral salts. The composition, consistency, and color of the honey is dependent on the type of flower from which the nectar is obtained. For example, alfalfa and clover produce white honey, heather produces a reddish-brown color, and lavender leads to an amber hue, while acacia and sainfoin generate a straw color in this sweet syrupy treat.

This honey can either be used by the bee itself, as food, or to produce beeswax, with which it builds and fortifies its hive, or another animal, humans for instance, can extract the honey for their own needs.

Once a honeycomb is filled with honey, it is the beekeeper’s responsibility to remove the honey. Beekeepers must take appropriate protection by wearing a veiled helmet and protective gloves.

The removal of the honeycomb can be done through several methods. The beekeeper may simply sweep the bees off the honeycomb by brushing them back into the hive. The second method consists of driving the bees into the hive by puffing smoke onto the honeycombs. When sensing the smoke, the bees mistake it for fire and try to flee with as much honey as they can. When they are fully engorged with so much honey, the bees tend to become calmer and less likely to sting. A third method is done by separating the queen bee from the worker bees. This is achieved with the help of a separator board. When the bees in the honey chamber sense that the queen is missing, they exit through a slot that prevents them from re-entering the honeycomb. 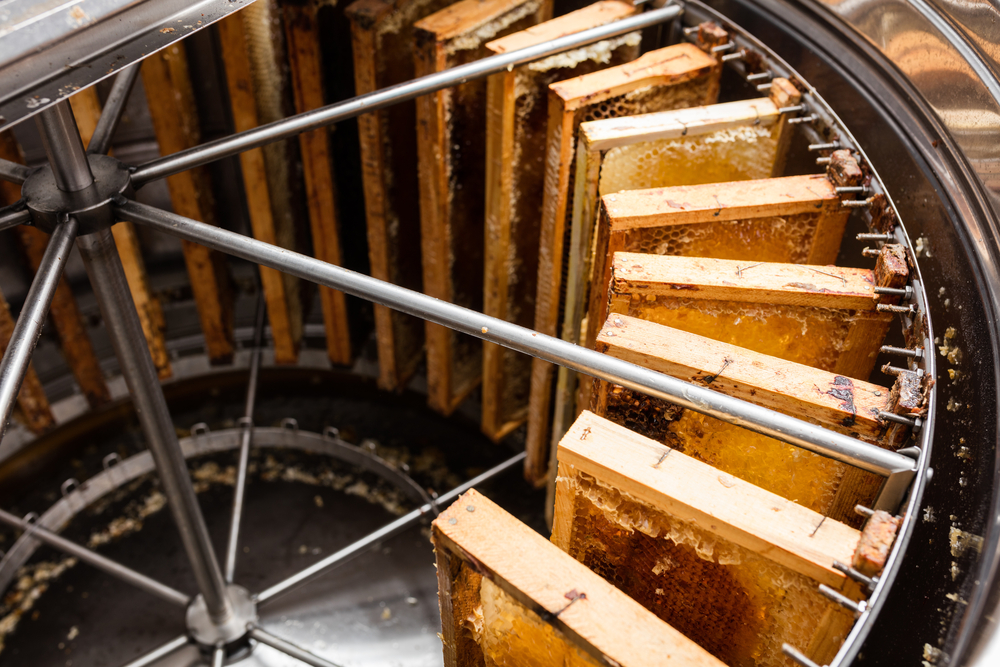 The honeycombs are then placed into an extractor. The extractor is a large drum that uses centrifugal force to draw the honey out. Each honeycomb can weigh as much as 2.27 kgs. Once the extractor starts spinning, the honey is pulled out and pressed up against the walls. It drips down the cone-shaped bottom and out of the extractor with the help of a spigot. Positioned under the valve is a honey bucket. This honey bucket consists of two sieves, which are used for filtering the honey from the wax. One of the sieves is coarse, while the other is soft.

Once the honey is extracted, it is shipped off to a commercial distributor. The honey is then poured into tanks heated to a temperature of 48.9°C. The honey is held at this temperature for roughly 24 hours so that any other impurities, such as pollen and bee parts, rise to the top and can be skimmed off.

After this, the honey is again put through a heating process, known as flash heating, at a temperature of 73.8oC. It is then flash cooled back to a temperature of 48.9°C. This whole procedure of flash heating and cooling is done in a matter of seven seconds. Although these heating procedures remove some of the honey’s beneficial health properties, consumers prefer the lighter, bright-colored honey that results.

A small percentage, perhaps 5%, is left unfiltered and merely strained. This honey is darker and cloudier, but there is also a market for this unprocessed form of honey. The honey can then be pumped into jars or cans for shipment to retail and industrial customers.

That is the long and meticulous process that delicious honey takes before ever reaching your mouth!