Cheese is made from milk. The milk is pasturised, and then curdled by adding a little lactic acid to it. The curdled milk is treated to remove the watery whey and the solid chunks of protein and fat. The solid part is further treated and, in some cases, allowed to age and ripen with other fungi and bacteria to develop taste. Celebrity cheese is made using the bacteria from celebrities.

What do margherita pizzas, mac & cheese, grilled cheese sandwiches, jalapeno poppers, and cheesy corn balls all have in common? They’re all dishes built around cheese! An important and beloved part of nearly all cuisines around the world, there is a staggeringly large variety of cheeses, literally thousands of different types of cheese.

One thing all of these cheeses have in common is how they’re made. Our reliable and trusted microscopic friends—bacteria and fungi—help us make the cheese we love so much. Depending on the type of cheese, the production method varies, but there are many common steps in any cheese-making process.

How Is Cheese Made?

Making cheese is a precise science and a skillful art, requiring precision and a touch of finesse. The exact recipe and production style may vary amongst the cheese families, but cheese production around the world shares five important steps. 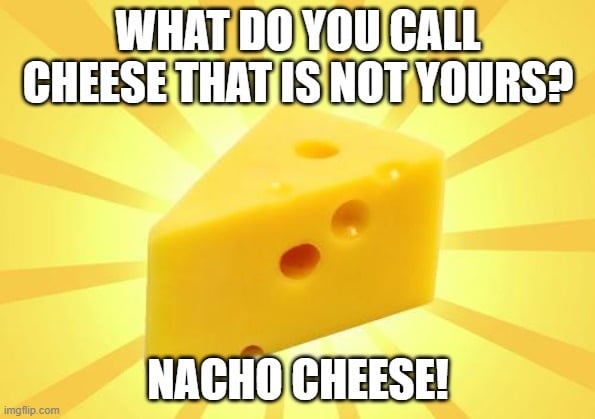 Heating And Treating Of Milk

Firstly, we need milk, because without milk, there’s no cheese (except vegan cheese). Cow, buffalo, goat, or camel… any of those milk varieties will do. This milk is then pasteurized, during which the milk is heated at 72°C to kill any bacteria present within it to increase the shelf life of the milk and make it safer to drink.

After heating, the milk is allowed to cool, after which it is acidified to make the milk curdle. This is done by adding a small amount of lactic acid bacteria, which absolutely love milk. These bacteria ferment the lactose (milk sugar) present in the milk, changing it to lactic acid.

The acid released by the bacteria reduces the pH of the milk, making it more acidic and causing the milk to turn thick, like yogurt. This fermentation continues until the pH of the milk becomes 4.6. The measure of acidity or basicity of a liquid, pH is defined on a scale that ranges from 1-14, where 1-6 is acidic, 7 is neutral and 8-14 is basic. 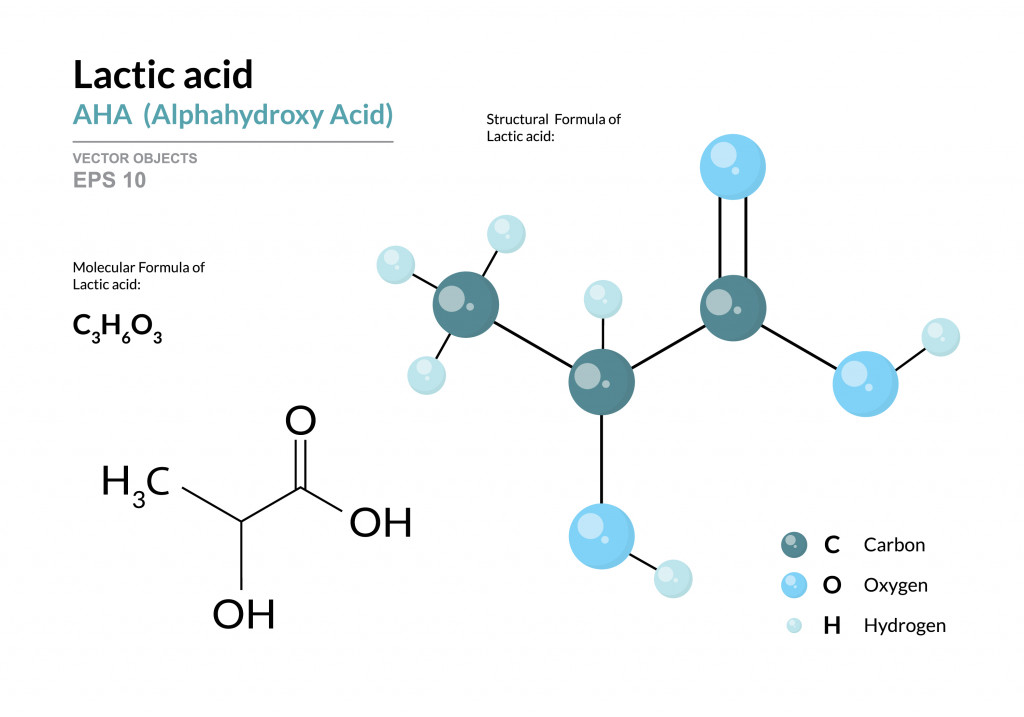 If you’ve ever observed spoilt milk, you will notice that it contains thick clumps and smells quite foul. This happens courtesy of the bacteria growing inside it, secreting lactic acid and spoiling the milk.

This treatment with lactic acid-secreting bacteria essentially coagulates the milk, making it look like a thick clump. This process is sped up by adding rennet, a set of enzymes taken from the stomachs of cows. The main enzyme in rennet is chymosin, which breaks down the milk proteins (casein) and curdles the liquid. Rennet usually coagulates the milk within an hour.

The next step is to cut or break the coagulum to separate the whey (the watery part of curdled/strained milk) from the coagulated cheese. The clumps are cut or crushed into small pieces in order to release all the whey present, which lowers the moisture level in the cheese. The extent of the coagulum cutting depends on the type of cheese produced; for example, hard cheeses like Cheddar are cut more, while soft cheeses like Brie are barely cut at all.

Once the cutting is complete, the whey is drained from the curd to dehydrate it. Once this is complete, the remaining curd particles can interact and mix freely, fusing together to form one large clump that will become cheese. This process is called knitting, and it can take several hours.

The next step is salting the cheese. Adding salt also further reduces the moisture content, as it creates an osmotic driving force to draw out the remaining moisture from the cheese. The salts used are either NaCl or KCl.

Salting can be done in one of two ways: either adding dry salt on top of the cheese or soaking the cheese in brine (a high salt solution). Dry salting is easier to do when dealing with small amounts of cheese, but for large amounts that range in the tons, soaking them in salt solutions is necessary for the even salting of the whole batch.

After the cheese is salted, it is shaped by being placed into molds. Additionally, the cheese can also be pressed while being molded, to remove any whey that could still remain.

At last, we come to the final step in this process, where cheese is ripened and aged. This step is also known as affinage. It is carried out by an affineur—a person whose entire job description is to be skilled at ripening cheese.

The cheese is exposed to oxygen, which diffuses inside at a maintained temperature and humidity level. Ripening develops the flavor and occurs because of the breakdown of acids, fats, and protein by the microorganisms present. The bacterial enzymes break down the fatty acids to release ketones, esters and keto acids. These resulting compounds are critical to the aroma, flavor and texture of the cheese. On top of that, as the lactic acid bacteria secrete more lactic acid, it further reduces the pH, which initiates multiple biochemical reactions that are critical to the cheese-ripening process.

This step is quite long and can sometimes even take years, depending on the kind of cheese! After all, age only matters if you’re cheese. Once ripened, the cheese is ready for packaging and eating. 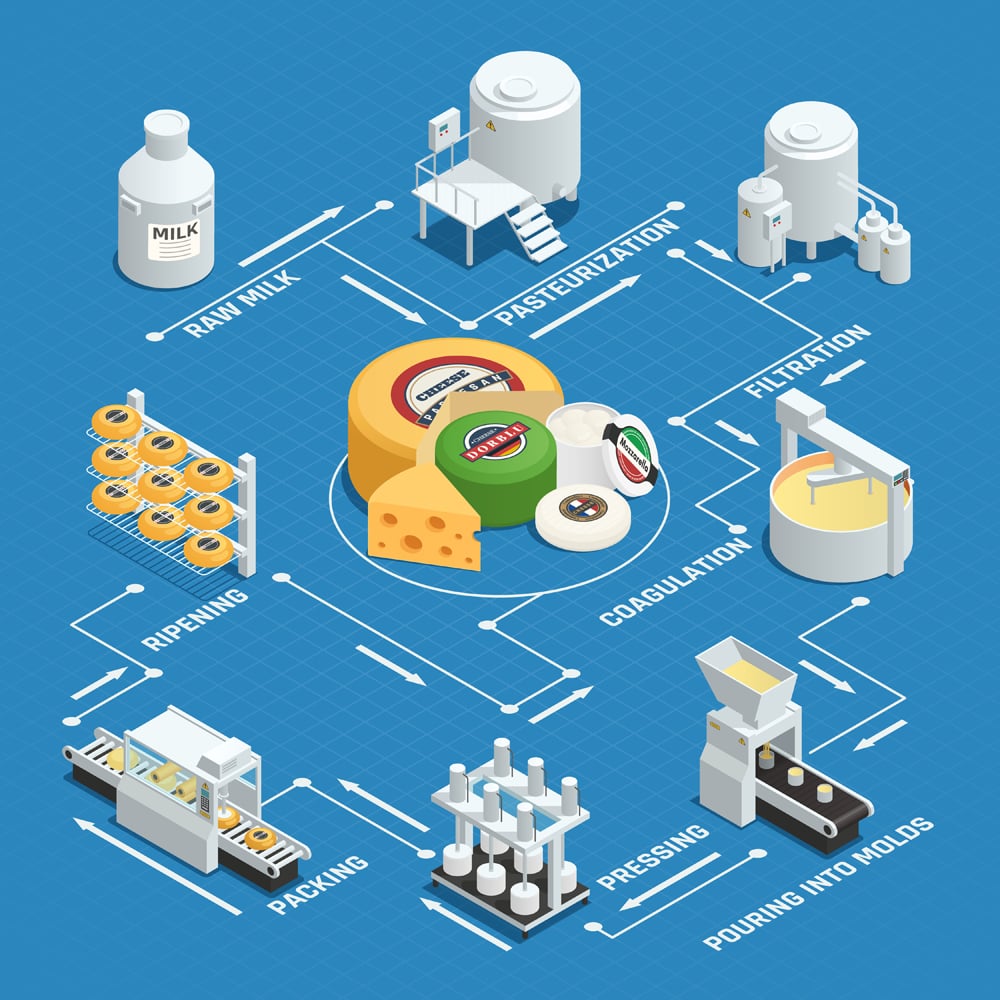 What Is Celebrity Cheese?

You’ve heard of Cheddar, Mozzarella, Gouda, and Brie… but what about human cheese? Bacteria taken from the armpits or belly-buttons of celebrities, and then cultivated in labs, can also be used for cheese production! Yes, this truly gross concept is exactly what “celebrity cheese” is. Really puts your fan loyalty to the test, doesn’t it?

The Victoria and Albert Museum has five kinds of cheese on display that are made from bacteria taken directly from British celebrities. If you’d like to read more about that strange level of stardom, you can read this article by the Smithsonian.

How good this cheese tastes is unknown, but I think you can definitely expect some celebrity cheese in your local shops in the next few years—for a higher price tag, I’m sure!

Cheese production has scaled up and progressed tremendously over the past few decades. These processes used manual labor for hundreds of years, but are now increasingly automated, which has removed the human error factor from the cheese-making process. Should the pH, salt or moisture content vary in any way, which often happened when human hands made cheese, the ripening process would result in an altered flavor of the cheese. Consistent flavor is one thing that all cheesemakers of the world struggle to get right.

Apart from that, there are other advancements in the cheese industry that have recently come to light. These include designing better enzymes or genetically engineering bacteria to further speed up the cheese-making process or improve the flavor. Basically, expect new kinds of cheese in the near future, as I doubt celebrity cheese will be the last novel kind on the market!