Viruses are named based on their physical and genetic attributes, including shape, host organism, nucleic acid type & configuration, and also the disease they cause, while disease names often incorporate both generic and specific terms that reflect their symptoms, origin, causal pathogen, etc.

COVID-19, the name of the ongoing pandemic disease affecting the world in 2020, took quite some time to be set in stone. While we identified the first positive case back in December of 2019, the World Health Organization (WHO) announced the official name for the disease and the disease-causing virus in February of 2020. Between these dates, well over 60,000 people came down with the disease and, more than 10,000 took their last breath. That number has climbed to nearly 6.1 million cases and 370,000 deaths (May 30, 2020).

While the name may seem trivial—(COVID-19: COronoVIrus Disease 2019)—a lot of thought goes into naming an unknown virus and the ensuing disease.

Ill-chosen names for diseases have previously led to diplomatic issues, stigmatization of affected ethnicities, neglect towards contagious animals, unfair restraints on trade and travel, etc. Moreover, the selection of an appropriate name is crucial in preventing panic.

The WHO has, therefore, instated a set of dos and don’ts when naming an unknown virus or a new disease. 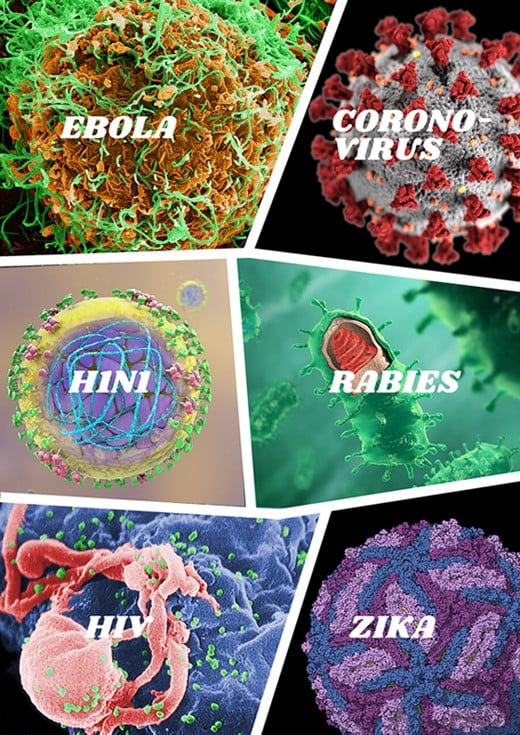 Zika, SARS, H1N1… may seem arbitrary, but a great deal of consideration goes into assigning names to unknown viruses and diseases.

The guidelines for naming an unknown virus and disease involve more don’ts than dos, and rightfully so.

Avoiding Names Based On Geographies

The WHO urges avoiding the use of any geographical tags (e.g., cities, countries, regions and even continents), names of affected people, animals, or food, any allusion towards a particular community, culture, occupation or industry, or any term that might frighten the masses. The WHO has instated a set of don’ts to avoid any kind of stigmatization.  (Photo Credit : Vitezslav Vylicil/Shutterstock)

Naming a disease based on its (perceived) region of origin has been a common practice for centuries. The Middle East respiratory syndrome (MERS), Ebola virus disease or Ebola hemorrhagic fever, Zika fever or Zika virus disease, and the infamous Spanish flu are some in a rather extensive list of diseases associated with geographical locations. Before being formally called COVID-19, the ongoing respiratory disease was often wrongfully referred to as ‘The Chinese virus’ or ‘The Wuhan virus’ by average people and even some notable political figures.

Sure, naming a disease after its place of origin may seem intuitive, but this opens up the affected community to xenophobia and racial or cultural discrimination. Individuals even remotely related to the affected region have been previously let go by institutions or called upon to take unusual leaves, kids are suddenly bullied for their cultural heritage, people are denied access to places and commodities, etc. In certain countries, like the USA, this may further degrade the condition and treatment of minorities (Africans after the Zika & Ebola virus outbreaks, Asians after the SARS & MERS epidemics).

Amidst the ongoing coronavirus pandemic, there has been an increase in Sinophobia (anti-Chinese sentiment). (Photo Credit : Kira_Yan/Shutterstock)

Also, sometimes, the geographical tag may not even refer to the exact place of origin. The 1918 influenza pandemic, for example, is infamously called the Spanish flu, but its origin is still a mystery. In a post-World War 1 world, where every nation was trying to save face and limited media coverage, Spain, a neutral European country, continued accurately reporting on the health status of its citizens. Naturally, the disease started being linked to Spain, and was eventually referred to as the Spanish flu across the world.

Apart from geographical locations, diseases have also been associated with a particular community or an animal, and each instance led to a variety of consequences.

Before being called acquired immune deficiency syndrome (AIDS), the sexually transmitted disease was commonly called the Gay-related immune deficiency (GRID). While the disease wasn’t confined to gay men, the first few cases were. The use of GRID instead of AIDS, in the early days of the HIV outbreak, further stigmatized an already marginalized community. The term also hindered the application of preventive and control measures.

Similarly, the 2009 swine flu outbreak led to the widespread neglect of pigs. The then-unknown virus (H1N1) resembled an influenza strain known to infect pigs and therefore led to the association. Some governments ordered a nationwide slaughter of the innocent farm animals, and individuals started ignoring pork & other pig-related products, which led to great losses to the pig-farming industry.

The WHO also blocks the use of terms such as “fatal”, “deadly” or “unknown”, as these may incite fear & cause global panic.

Now, switching over to the dos of naming an unnamed virus or disease, the WHO recommends using terms that are generic but also specific, until the International Committee on Taxonomy of Viruses (ICTV) and the International Classification of Diseases (ICD) confirm a permanent name.

It remains the responsibility of the discovering party (scientists or national authorities) to suggest a few suitable names for the newly discovered human virus and disease. The name should be scientific and not lead to any sociopolitical issues. The WHO has provided guidelines for how to piece together a scientific-sounding and non-offensive name.

There are very few disease names that comply with the WHO’s guidelines and SARS is one of them.

Naming Based On Physiological Or Pathological References

First, the name must include a generic term to describe the basic characteristics of the disease. The term may refer to any clinical symptoms or affected physiological processes (hepatitis, diarrhea, immunodeficiency, etc.) in infected patients. SARS and MERS, for example, include the term ‘respiratory’ as shortness of breath is a primary symptom in each. Also, any anatomical or pathological references (cardiac, gastrointestinal, etc.) can be made.

Naming Based On Severity Or Seasonality

More specific descriptive terms are added once more concrete and factual data about the disease is available. This includes terms describing the epidemiology & origin of the disease (acute, zoonotic, congenital, contagious, etc.), and its severity (mild, severe, etc.). The name can also incorporate the exact population and age group of patients (juvenile, maternal, etc.). If the disease is seasonal or environment-specific, then terms such as summer, winter, or subterranean, desert, coastal, swamp can be used, respectively, provided enough evidence is available.

Furthermore, if the causal pathogen (virus) has been identified, its formal name (coronavirus, salmonella, influenza virus), along with a descriptive term (novel, variant, subtype), should be included as part of the disease name. In the case of any similarity with another disease, the new one’s year of discovery (with or without the month) should be mentioned.

Having multiple terms can make a disease name annoyingly long, so appropriate acronyms should also be evaluated beforehand.

Similar to diseases, virus names should be kept simple, yet scientific. This is achieved by focusing on factual data, such as the virus’ morphology, host organism, nucleic acid type & its configuration, and the disease it causes, for example, the coronavirus is named so for its crown-like shape (“corona” translates to “crown” in Latin). Naming a virus based on its genetic structure further aids in the development of vaccines and diagnostic tests. Also, the classification of a virus into its respective taxa takes precedence over naming it.

Regardless of naming conventions and classification systems, each living organism is known by two separate names. One, a scientific name assigned by an authorized organization (Homo sapiens), and second, a common name used by the general public (humans). The same remains the case with diseases and viruses.

Also Read: What’s The Difference Between Endemic, Epidemic And Pandemic?

Generally, a common name is based on limited knowledge that is broadcasted on news outlets and social media. Additionally, very little thought goes into selecting a common name (as evident from the interim names ‘Wuhan Virus’ and ‘China Virus’), which can lead to all the stigmatizing events discussed earlier. The ever-growing use of social media further facilitates the spread of these common names.

The WHO’s implementation of the ‘Best practices for naming new human infectious diseases’ is an attempt to assign names before the masses do, and in the process, eliminate the establishment of any offensive notions that can cause even more pain and destruction.