Nature never ceases to amaze me. If you thought that the likes of the box jellyfish (deadliest being in existence), the poison dart frog, komodo dragon, or flying snake were strange, then you’re in for a real surprise. Weirder animals do exist, and I’m sure that you would never see it (the level of weirdness) coming!

Hang on to your hats, folks, because you’re in for a visually incredible joyride. Be scared! Be very scared.

Scientifically known as Macrocheira kaempferi, this marine crab species is found around the waters of Japan. This creature has the longest leg span of any arthropod (crustaceans with exoskeletons), measuring up to 12 ft from claw to claw and weighing around 19 kgs. Its claws are deadly (although non-poisonous) and are known to cause serious injuries to fishermen. Since it is edible, overfishing has led to a dip in its population over the years.

If this isn’t an arachnophobics worst nightmare, I don’t know what is! 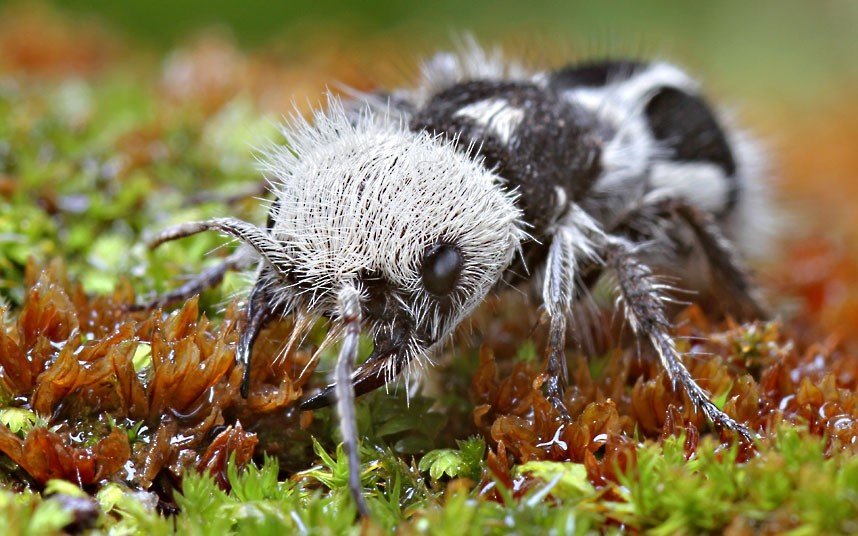 Not so beautiful once it releases its sting.

These aren’t necessarily ants, but actually a species of wasps from the family known as Multillidae (also called velvet ants). Multillidae are made up of 3000 species and these insects earned their name due to their black and white color (resembling a panda). These ants are found in Chile and are infamous for their extremely painful stings. These insects have a lovely appearance, but they possess a seriously nasty sting that can be extremely painful on your skin. This is why they are also called “cow-killers,” since they are capable of knocking out cows and other animals that are much larger than they are.

This creature is the epitome of being a bad-ass. Size doesn’t really matter, after all! What are you looking at?

It’s a deer. It’s a giraffe. No it’s a Gerenuk! This unusual animal has a large body, a long neck and a small head, making it look like a cross between a deer and a giraffe. However, this animal actually belongs to the same family as gazelles. The gerenuk is found in the African regions of Tanzania, Kenya (Maasai Steppes), Southern Somalia, Ethiopia and Eretria. This bizarre-looking animal can go without water throughout much of its life. This is because its diet mainly consists of prickly bushes, trees, flowers, fruits and buds. This supplies its body with enough water for survival. The long neck and legs also give them an amazing reach and helps them graze on tall trees. This species’ survival is hanging by a thin thread, however, as its population is severely threatened. The Blue Parrotfish belongs to the family of Parrotfish in a genus known as Scarus. It is found on coral reefs in shallow parts of the Western Atlantic ocean and the Caribbean Sea. These animals are primarily blue with a yellow spot on their head, which fades as they age. The name “parrotfish” refers to the beak-like jaws and fused teeth of the species. These teeth are used to scrape algae off of rocks and coral.

Parrotfishes use their teeth to grind rocks, and the rocks/corals that they ingest are broken down into smaller particles, which is then eliminated, effectively creating new sand.

They spend 80% of their lives in search of food…talk about a glutton! This bird is prettier than most humans.

The ribbon-tailed astrapia (Astrapia mayeri), is a species of birds of paradise (exotic birds found off the islands of Australia, like New Guinea and  Malaku).

Their diet mainly consists of fruits, especially from the Umbrella Tree, as well as insects, spiders and frogs.

They reside in the upper mountains and subalpine moss forests and forest edges (around 1800-3450 m, mainly above 2450m).

The male ribbon-tailed astrapia has the longest tail feathers in relation to body size of any bird (over three times the length of its body). It is an extremely endangered species, but also one of nature’s true masterpieces. Has a face like the saddest person on planet.

Dubbed as the ugliest fish in the ocean, this freak of nature is found in the deep waters off the coast of Australia and New Zealand.

With the absence of muscles in its body, the blobfish looks like a flesh-colored gelatinous ‘blob’ floating close to the sea bed. It sometimes bears a spooky resemblance to a human face with eyes, lips and a comically large nose. Its body is 90% water, but its body density is slightly less than water, allowing it to float in water without having to swim.
Its face bears the resemblance to an unbelievably miserable old man. Looks like a creature from the Men in Black series.

These are small, semi-aquatic, blind species of moles found in the moist low regions of Eastern Canada and Northwestern USA.

Since it is virtually blind, it relies heavily on its remarkable star-shaped nose to find food. This organ enables the star-nosed mole to decide whether something is edible with astonishing speed . In fact, it recently entered the Guinness Book of Records as the world’s fastest forager, as well as for its remarkable ability to sniff out food underwater. The mole can  decide whether or not something is edible within about 25 milliseconds! No, this is not really a dragon (Dragons only exist in Game of thrones and China, obviously). This fearsome beast is actually a spiky lizard and the only species of the genus Moloch. It is found in the deserts of Australia.

Instead of spitting out fire (like normal dragons), they can puff themselves up to appear much larger. Not quite the same thing, but still pretty cool!

The Thorny dragon changes colors depending on the temperature (pale in warm weather and dark in in the cold). It also has a ‘false’ head, which it presents to the predator when under attack. Seems like zebras and deers are struggling to understand the mating process.

Jokes apart, okapis are actually closely related to giraffes. The solitary okapi is found in the canopy forests of the Democratic Republic of Congo and unfortunately, okapi are actually an extremely endangered species.

Okapi is known for its reddish-brown and slightly oily pelt that carries zebra-like stripes. It also has skin-covered horns and relatively poor vision; therefore, they depend on their sense of smell and ultra-sensitive hearing.

The okapi is Congo’s national animal. Unicorns of the sea.

The long tooth this underwater marvel possesses almost makes him look like a unicorn of the sea. A narwhal is a medium-sized toothed whale that possesses a large ‘tusk’ that is actually a protruding canine tooth. It lives year-round in the Arctic waters around Greenland, Canada, and Russia.

In medieval times, its long, straight tusk was often given to royalty and passed off as a ‘unicorn horn’. This tusk can grow up to 10ft long. Its long tooth has a tough core and a soft outer layer, making it very flexible. Surprisingly, not all narwhals have tusks. Only the males and roughly 15% of females have it. Marine biologists have no idea that purpose the tusk serves, but it does make for a great fish story!

The more I look at fascinating beasts like these, I wonder if these creatures similarly label us humans as ‘unusual beings’? I wouldn’t be surprised!